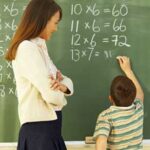 This is the sixth in a series about Virginia’s Standards of Learning assessments.

Persistent gaps in educational proficiency for important subgroups — minorities, the economically disadvantaged, students with disabilities, English language learners — have long preoccupied Virginia educators. One thing we have learned in our Comprehensive Instructional Program consortium regarding student outcomes is that when teachers, schools, and divisions set higher expectations, performance improves.

The Virginia Board of Education adopted more rigorous standards and more rigorous SOL tests, which were implemented in math and reading in 2012 and 2013 respectively. The SOL pass rates dropped precipitously in those years, but began to rebound immediately in math. The reading proficiency rates declined the second year, and then improved with the advent of retesting students in grades 3-8 who narrowly failed their SOL tests in 2015. High school students had the opportunity to retake tests years earlier. 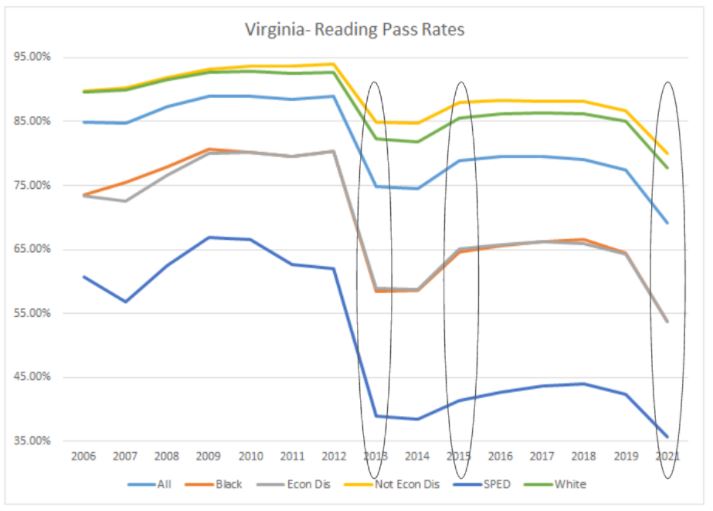 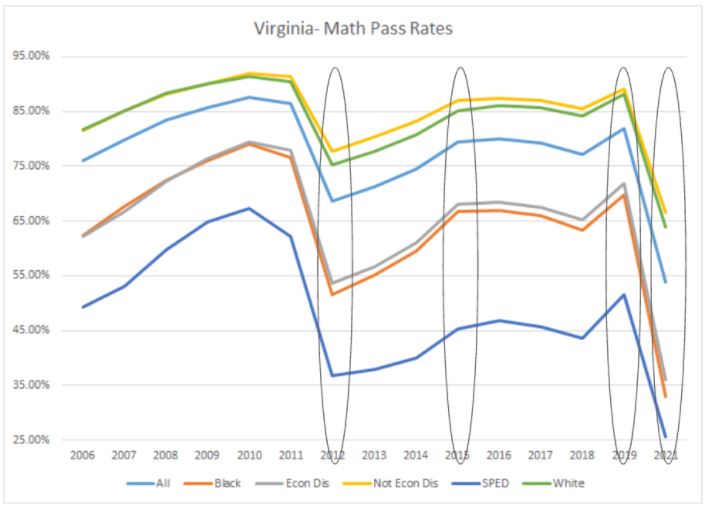 Figure 2 also demonstrates another significant increase in math proficiencies in 2019. That year, Virginia implemented updated math Standards of Learning which did not significantly differ in rigor. However, the Virginia Board of Education approved lower cut scores — the percentage of questions a student had to answer correctly be classified as pass proficient — for the new math tests administered that year. Table 1 displays the differences in cut scores as well as the differences in SOL pass rates for each math test. The old tests with the higher cut scores were administered in 2018, and the new tests with the lower cut scores were administered in 2019. 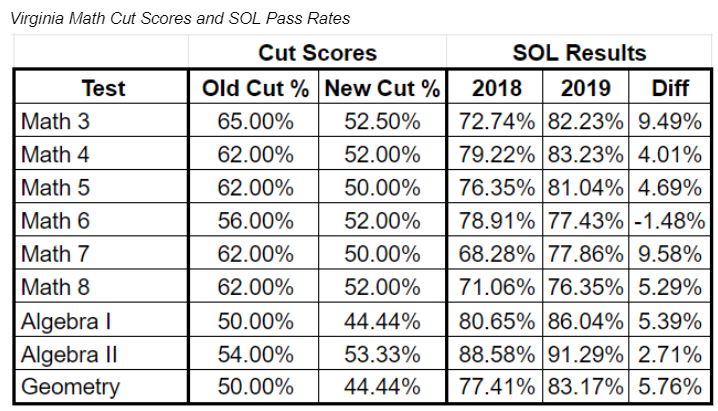 The effect of lowering expectations for student proficiency is obvious: more students were classified as proficient. In the absence of any other data to provide context, this might seem like a good thing. Of course we all want more students to be proficient! 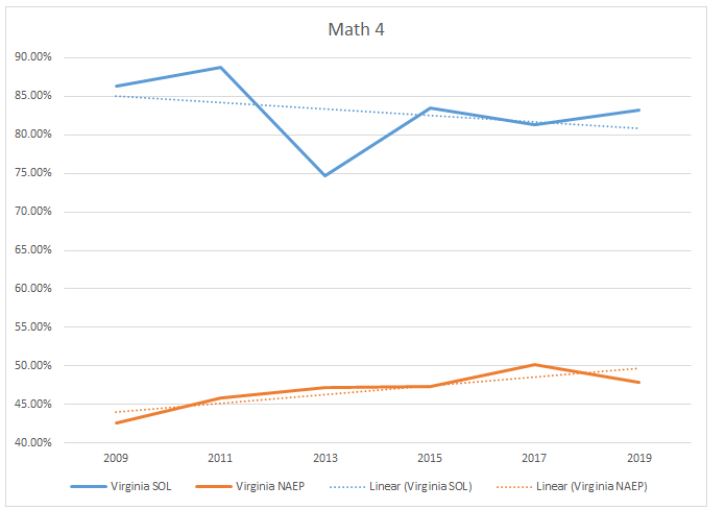 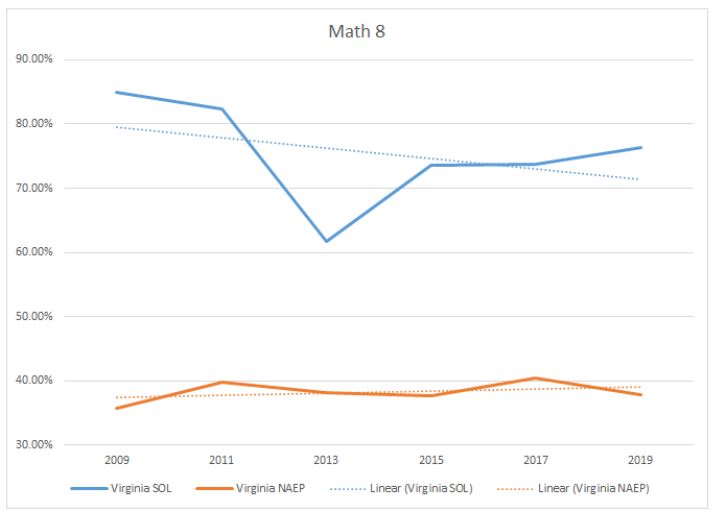 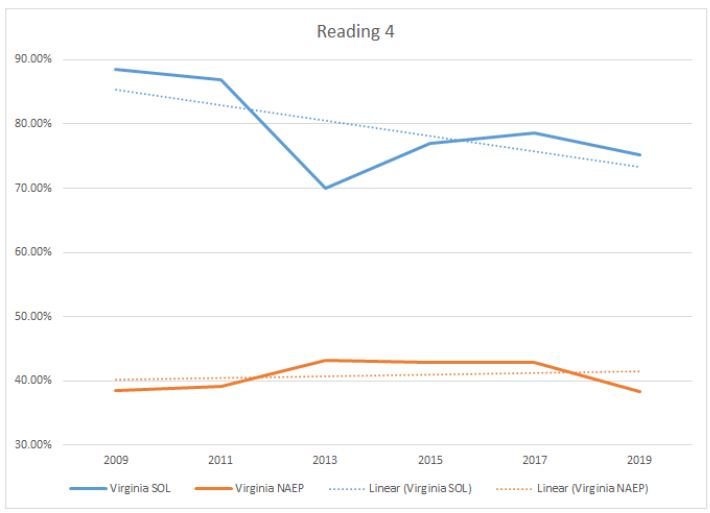 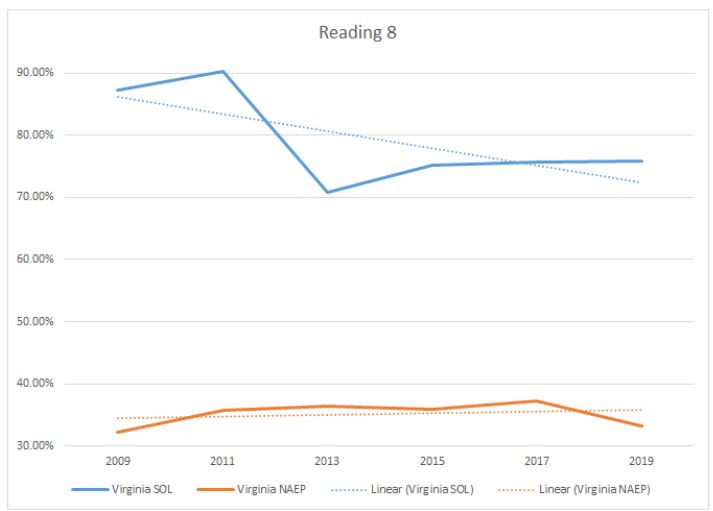 Figures 7 and 8 display the subgroup proficiency gaps on Virginia’s SOL tests. The Black-White Gap is calculated by subtracting the pass rate of white students from the pass rate of black students, and the other gaps are calculated accordingly. The more negative numbers signify greater gaps in proficiencies. 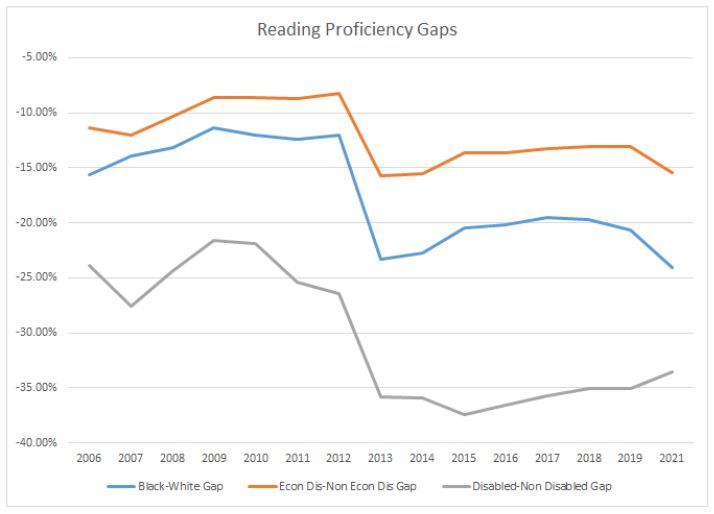 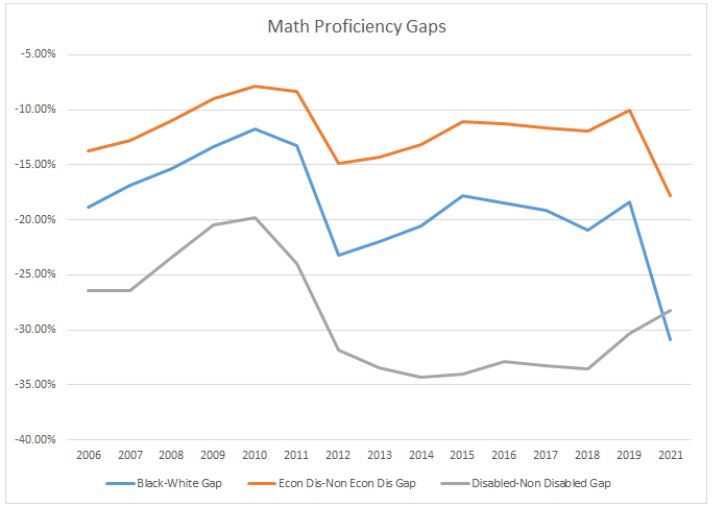 While the argument can be made that lowering expectations for SOL proficiency (i.e. lowering cut scores) seems to produce lower proficiency gaps among subgroups, do our students who find themselves in those lower performing subgroups benefit from the lowered standards just because the gaps decrease? Is it easier to rig the system by lowering our standards so that more kids in those subgroups can demonstrate “proficiency” on paper than to actually help them achieve at higher levels? Has lowering standards ever really improved anything?

I strongly believe that a good K-12 education can provide the building blocks for success in life. I similarly believe that strong reading and mathematical skills are a lynchpin in a good K-12 education and provide a means by which to learn almost anything else. Our reading and math SOL tests are not perfect, and cannot be made to be so, but they do measure valuable skills. I have yet to encounter anyone who could produce a valid argument against their kids mastering those skills.

Just because these proficiency gaps have persisted in Virginia since the implementation of SOL tests doesn’t mean they have to continue to do so. There are schools and school divisions in this state that have greatly diminished those gaps. Instead of working to obfuscate those proficiency gaps through the arbitrary manipulation of the proficiency standards, maybe our students would be better off if schools set higher expectations and implemented a process to replicate the strategies of those who narrowed their gaps. I strongly believe the latter would yield much better results.