Parole Board Sets Free Another Murderer 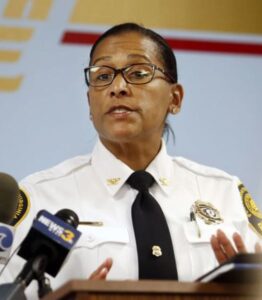 On June 22nd, just ten months later, the Parole Board miraculously concluded these reasons no longer existed, and decided Mr. Williams should be released from prison.

Williams went to the Sarver family’s home. When Williams got there, Mr. and Mrs. Sarver, their 14-year-old son James, their 13-year-old daughter Linda, and their two younger daughters, Dianne and Nancy Marie, had gone to bed. Hearing a noise, Mr. Sarver went to the front door and opened it. Sarver talked briefly with Williams, after which Williams shot Sarver in the head, killing him.

As Mr. Sarver fell dead at his front door, Williams entered the house, went into two of the bedrooms, shot and wounded Sarver’s wife, shot “Little Jim” in the stomach and then shot 9-year-old Nancy Marie in the chest. Williams then shot again at, but missed, Mrs. Sarver. His gun now empty, he tossed it and grabbed Dianne around the neck and “shook her like a chicken” trying to choke her.

Linda, who had followed Williams when he carried Dianne out of their bedroom, saw her mother lying in the hall “like Williams had been beating her.” To protect her mother Linda struck Williams with a mop or broom handle, whereupon he grabbed Linda’s hands and dragged her out of the house. While he was dragging Linda across the front lawn, the lights from a passing automobile lit up the yard. A wounded Mrs. Sarver, who was following Williams and Linda, shouted that the police were coming, and like a coward — Williams ran.

Does this sound like a man who should ever have been released from prison?

On October 14, 2020 I spoke with Bryan Haskins, the Commonwealth’s Attorney for Pittsylvania County, and he reported that his office had received ZERO communication from the Parole Board regarding this matter; which seemed remarkable since the decision to release Williams had been made nearly four months earlier. On October 17th, three days after I shared the information regarding the Parole Board’s decision involving Mr. Williams on the Senate floor,
Bryan Haskins’ office received a facsimile from the Department of Corrections, pursuant to that department’s notification requirement found in §53.1-160, informing his office of the upcoming release of Mr. Williams on October 29th.

This was the only notice the Commonwealth’s Attorney office ever received regarding this matter, which prevented them from having any input at all on the Parole Board’s decision. More importantly, I am deeply concerned that none of the surviving family members were provided notice or afforded an opportunity to have their voices heard.

Once again, I am appealing to you to intervene, place a moratorium on all Parole Board decisions and thoroughly investigate the Parole Board’s actions to ensure they are consistent with their policies and procedures. The Office of the Inspector General has already revealed some genuine red flags that are steadily eroding the trust that Virginians have in the parole system. As governor, you are entrusted with the safety and security of the Commonwealth. I beseech your immediate attention to this dangerous situation.

This entry was posted in Crime , corrections and law enforcement and tagged Guest contributors. Bookmark the permalink.

10 responses to “Parole Board Sets Free Another Murderer”