No, You Can’t Use Public Streets as Billboards 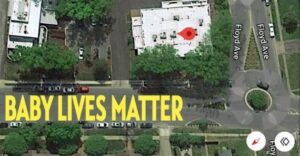 After a closed meeting earlier this month, the planning commission reversed its previous approval of the “Black Lives Matter” approval, and Venture Richmond withdrew its application.

Dickenson told Virginia Public Media that he was trying to make a point: “If you allow one, you have to allow all.” 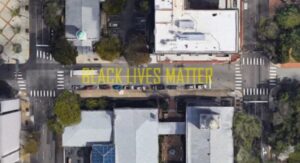 Street murals are a thing now. First introduced in Washington D.C., the practice has spread to numerous other cities across the country. Then conservative groups countered with requests for “Blue Lives Matter” murals.

“I think it’s best if government just stays out of making roadways and other public areas political art displays, because then you pick and choose and government shouldn’t be in the business of doing that,” he said.

Bacon’s bottom line: Dickenson makes an important point. Public streets are for the public. They should not be suborned by private interests. If someone wants to make the point that black lives matter — or baby lives, or blue lives — let them buy a billboard!

The incident also calls into question the judgment of the Venture Richmond leadership. The organization is focused on downtown development, marketing, tourism, and beautification. It puts on events and manages the Richmond riverfront. Venture Richmond is not a political advocacy organization. It has no business involving itself in political or public-policy controversies beyond narrow issues impacting its downtown initiatives.

In the wake of the city’s inability or unwillingness to enforce public order in the face of continued “protests,” many businesses are rethinking their commitment to downtown. At the very least after this episode, I’d be rethinking my commitment to Venture Richmond.

14 responses to “No, You Can’t Use Public Streets as Billboards”