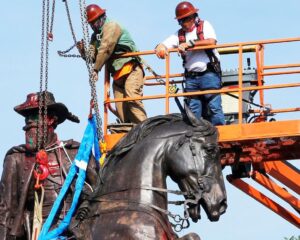 A Richmond Circuit Court judge has appointed an August County prosecutor to investigate whether Richmond Mayor Levar Stoney broke any laws when he awarded a gave a $1.8 million contract to remove Civil War statues.

Richmond Councilwoman Kim Gray, who is running for mayor against Stoney, had requested an investigation, and Commonwealth Attorney Colette McEachin had referred the matter to Circuit Court Judge Joi Taylor.

“All I can tell you at this early stage is that we will investigate the matter in an unbiased way, and take whatever action is appropriate given what we find,” said Martin, a former Richmond prosecutor who moved to Augusta in 2014 , reports the Richmond Times-Dispatch.

The Virginia Star quotes Stoney spokesman Jim Nolan as providing additional details defending Stoney’s action in which, Bacon’s Rebellion was the first to report, he gave a emergency no-bid contract to NAH LLC, whose owner had previously donated $4,000 to Stoney and his political action committee.

“Contractors locally, regionally and up and down the East Coast were contacted. The city received a written proposal from only one firm that was willing to do the work and assume the risk it would entail.”

Nolan added, “In fact, NAH was not initially contacted by city or administration officials but was referred to the city by another vendor that had turned down the work. Politicians who refused to act sooner could learn a thing or two from the courage shown by this black-owned firm and the crew that did the work in the face of white supremacist threats.”

This entry was posted in Government Oversight, Scandals and tagged James A. Bacon. Bookmark the permalink.