In Memory of a Great (West) Virginian 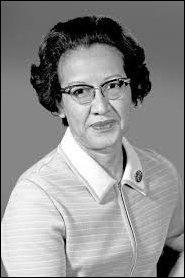 Katherine Coleman Goble Johnson, a pioneering and brilliant African-American mathematician whose on-the-money calculations kept early astronauts alive, died Monday at the age 101. She spent most of her life in Hampton and worked for NASA there until she retired in 1986.

Her life and that of two other female African-American mathematicians from NASA, were portrayed in the 2016 film “Hidden Figures. Last year, she was awarded the Congressional Gold Medal.

For years she moved in and out of education, teaching at a school In Marion. Va. and continuing her studies. She moved permanently when her husband found work in Hampton.

By chance, the National Advisory Committee for Aeronautics, now NASA, was opening a research center in Hampton and African-Americans were allowed to work there in professional capacities.

She was assigned to a pool of women who performed math calculations but due to rules instituted by President Woodrow Wilson, a Virginian who was president during World War I, people of color working in the federal government confronted myriad and humiliating restrictions such as having to work together and use separate toilets and drinking fountains.

Ms. Johnson prevailed despite the slights. She demanded to be included in important conferences. She and her team were credited with calculating such precise trajectories that Alan Shepard, America’s first man in space, landed close to pickup-ships. She also worked on John Glenn’s flight and helped map the landscape of the moon and provided an accurate trajectory for Apollo 11 and other moon flight. She watched the landing while attending a meeting in the Pocono Mountains.

According to her biographers, Ms. Brushed off racism by sticking to her work. She has been portrayed in a number of films and television series and is a promoter of STEM education for technology-minded students. The winner of many awards, Ms. Johnson was the subject of a  Barbie Doll likeness of her complete with NASA badges.

This entry was posted in Race and race relations, Science & Technology and tagged Peter Galuszka. Bookmark the permalink.

5 responses to “In Memory of a Great (West) Virginian”