In 2019, 34% of Virginia’s Black 4th graders Could Not Read – Mississippi Offers Hope 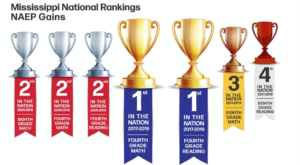 Since 2013, Mississippi has made unprecedented, best-in-the-nation improvement in the academic achievements of its children starting as measured in nationwide testing. The improvements were especially pronounced in 4th graders who benefited directly from its 2013 literacy law.

I have done a deep dive into those results and traced them back to public policy.  There are actionable lessons for Virginia school districts seeking improvements in the literacy of their students. Mississippi has far better school literacy laws, and a markedly better Board of Education and education strategic plan than Virginia.

In 2013 Mississippi fourth graders were reading over one full grade level behind the national average on the National Assessment of Education Progress (NAEP) assessment. (NAEP is the only assessment that measures across the nation what U.S. students know and can do in various subjects. It is administered every two years.)

I have stripped that law only of its references to Mississippi state code and offer both the law and a summary of what they are doing to implement it as a potential state law for Virginia and/or a school board policy document for Richmond Public Schools and other districts struggling with student literacy.

The law, which was strengthened in 2017, and the policies and tools that go with it attempted to ensure that every student reads at or above grade level by the end of 3rd grade. The act is part of a statewide effort called Strong Readers=Strong Leaders to improve literacy among all school children.

The prescriptions in the law are based on prevention. Reading instruction is a major focus of Kindergarten through third grade, as third grade is the year that students transition from learning to read to reading to learn. Struggling readers are identified early. Students identified as having a reading difficulty are provided immediate intensive reading intervention that meets their specific reading needs.

Third-grade students must meet reading standards by the end of the year in order to be promoted to the fourth grade. Students are given multiple opportunities to demonstrate sufficient reading skills for promotion. Family involvement and understanding are considered critical to students’ success.

It has succeeded beyond all expectations  In the 2019 NAEP tests, Mississippi students demonstrated they had made up the entire year their predecessors had been behind the rest of the nation.

In 2019 Mississippi for the first time reached the national average in the nationwide NAEP math and reading tests. It has done this with a household median income (2019) of $45,081. The same statistic for Virginia was $74,222.

The most impressive thing about the Mississippi results is the steep slope of improvement. Meanwhile, the NAEP results in Virginia appear to be trending in the wrong direction.

After assessing the Mississippi law, which as indicated earlier has no Virginia counterpart, I looked at the strategic plans of both states.

Virginia. In Virginia, the documentation of that plan is the Virginia Board of Education Comprehensive Plan: 2018-2013. It focuses on achieving equity by revising the state accountability system downward.

“The Board of Education has proposed changes in the Standards of Accreditation which have the effect of broadening the measures and increasing the areas of focus from exclusively outcome-based to a blend of input- and outcome-based measurements.”

Seriously, that is what it says.

The Virginia Board of Education is actively downplaying results. In their list of causal factors for lack of equity, they somehow don’t mention that 34% of Virginia’s Black 4th graders can’t read. The rest of it will give you a headache. There are no measurable goals in the entire document. The actions they assign themselves have verbs like promote, advocate, oversee, ensure, encourage, support, review and guide. They left themselves immune from accountability.

Mississippi. The Mississippi plan strikes a completely different tone. The opening sentence tells you in stark terms where they plan to go:

“The Mississippi State Board of Education Strategic Plan for 2018-2022 sets the roadmap for changing the trajectory of public education in Mississippi.”

It is an action-oriented plan with specific goals, but also increasingly specific outcomes and very specific strategies to which they hold themselves accountable every year with annual progress reports. It reflects a completely different mindset and action-oriented strategies with measurable results. They insist on being held accountable.

Mississippi K-8 schoolchildren are considerably Blacker and poorer than those in Virginia.

Mississippi K-8 students are nearly evenly split between two races/ethnicities, 47% Black and 44% white. Of the rest 4% are Hispanic, 3% mixed race and 1% Asian. Seventy-eight percent of those Mississippi school children are eligible for the National School Lunch Program.

In Virginia schools, 49% of the K-8 students were white, 21% Black, 16% Hispanic, 7% Asian and 6% two or more races. Forty-two percent of Virginia school children were eligible for the National School Lunch Program.

Virginia often points with pride to the above average performance of its schoolchildren in NAEP reading and mathematics tests compared to the rest of the nation.

A dive into the numbers suggests that requires some qualification. Seven percent of Virginia’s students are Asian American, 1% of Mississippi’s are. The Asian- American children’s scores compared to other ethnic groups in this test are profoundly higher in both math and reading.

To remove the differences in Asian American and Hispanic demographics and their effects on performance, I examined the Black and white student results in reading and math in 4th and 8th grades for 2019 and 2015 in Mississippi and Virginia and the trends in each.

It appears that virtually all of the difference between Mississippi and Virginia children statewide on the most recent 2019 NAEP is accounted for by the extraordinary scores and relatively larger population of Virginia’s Asian-American kids.

In 4th grade reading, the average Virginia score was 224: Asian 244, White 231, Hispanic 211, Black 207. The percentage of Black students at or above NAEP Basic was 51. So 34% of Virginia’s Black kids in 2019 could not read in the 4th grade. The gap between Virginia’s white and Black kids on that test had not changed significantly since 1998.

Of all the things we hear from the State Board of Education about equity, strangely this is not one of them. That failure by the state’s education policy cabal, led by the the Board of Education, the Superintendent of Public Instruction and University of Virginia School of Education, to publicly acknowledge and especially to act on this problem is shameful.

Lots of talk about racial justice, but somehow a third of Black 4th graders being unable to read hasn’t made the cut.