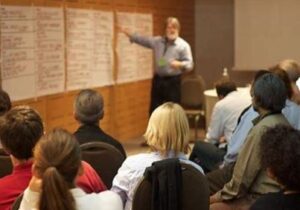 The State Council of Higher Education for Virginia (SCHEV) announced today that it has joined forces with dozens of higher education and student organizations in a “shared commitment” to make “democracy learning” a top priority for higher education.

In a SCHEV press release, this commitment is expressed in the most neutral and anodyne of terms. The Shared Commitment signatories, says the SCHEV statement, calls for “civic inquiry, practice in civil discourse and collaborative work on real-world public problems.”

“By thoughtfully incorporating civic learning into their academic and extracurricular programs, Virginia’s colleges and universities are equipping students with knowledge and skills that will benefit not only the students themselves, but their families and communities now and well into the future,” says SCHEV Director Peter Blake.

It sounds benign. Every thinking person would agree that all Virginians would benefit from learning how to be better-informed and more-engaged citizens. But is that what SCHEV and Virginia are signing up for? Or is the Shared Commitment just another tool for making “social justice” a core mission of Virginia’s colleges and universities? Will the result be a citizenry that is more capable of thinking independently and rigorously about public issues, or one that is more steeped in the “woke” pieties about race, class, and gender?

According to the press release, SCHEV got a head start in this way of thinking. In 2017 the Council added civic engagement as a core competency that all public colleges and universities are required to provide their undergraduates. In that vein, Virginia is one of only three states so far to have signed the Shared Commitment.

Here’s a tip-off that the inoffensive, students-need-more-civics rhetoric is cloaking something more partisan and ideological. Quoted in the press release is Jonathan Alger, president of James Madison University where incoming students were subjected to shameless woke indoctrination.

Given our history, the Commonwealth of Virginia and its institutions of higher education have a unique opportunity to play a leadership role nationally in civic engagement work. SCHEV has worked with our institutions to ensure that civic engagement is a meaningful part of the learning experience both in and outside the classroom, and to prepare students to be active citizens who understand their responsibilities as well as their rights in a democratic society. These efforts will help students develop skill sets in areas such as communications, teamwork, critical thinking, information literacy, problem-solving and ethical reasoning that will help them to have productive lives and careers.

Notice that the tell-tale phrases like “social justice,” “equity,” and “systemic racism” are never once mentioned in these public pronouncements. But do a little digging, and you’ll find that that’s exactly what this initiative is all about.

The Shared Commitment pledge, the press release tells us, was organized by Civic Learning and Democracy Engagement (CLDE).

To the Left, “equity” has a precise meaning — it means equal group outcomes, as reflected in the phrase “reversing inherited disparities.” Note also the third bullet point that emphasizes the need for “racial healing” and various “public problems” of keen interest to progressives.

The best way to understand this initiative is by what is not mentioned. There is no thought here to how society increases incomes and wealth, only how to redistribute it. There is an implicit assumption that “reversing disparities” is the obligation of government and/or society as a whole, not the people experiencing the disparities. There is no thought here to individual self-improvement as a pathway to equality, no use of the phrase “equality of opportunity,” in which society provides ladders to help people escape poverty but require the people to do the climbing. There is no consideration whatsoever to the cultivation of character or individual virtue.

It goes without saying that nowhere do any of these “partners” make a point of endorsing the value of diverse intellectual perspectives on how to solve society’s problems.

The Shared Commitment initiative is best understood as a program of America’s clerisy (or intellectual class) to advance its control over the indoctrination of the nation’s college students — and to lobby for more public funds to support the effort.

Many of the details of implementing this ambitious program are left to CLDE’s partners. One of those is College Promise, which has the laudatory goal of making college more affordable, but advocates achieving that goal through increasing student financial aid rather than asking higher-ed institutions to rein in their costs. College Promise makes the argument that the first two years of higher education should be “free.”

Another partner, the State Higher Education Executive Officers Association (SHEEO), is a trade association that, among other things, lobbies for more government money for higher-ed — but with no accountability, please. SHEEO’s take on the initiative notes that “equity-committed civic learning” is intrinsic to the Shared Commitment, and then adds this:

CLDE seeks to expand the national debate from its insufficient focus on skills and short-term training to a larger concern with all college students’ civic, historical, global, and intercultural knowledge, and students’ active work on pressing public programs.

Translation: Colleges spend too much effort teaching real-world skills that actually allow people to participate in the economy — you know, achieving “equity” through individual effort — and not enough effort on social justice movements led by the clerisy.

If your goal is to destroy the greatest system of higher education on the planet, this is just how to do it.