Mama Bears Vs. the Feds

FBI vs. Moms
Outside the Fairfax County school board meeting at Luther Jackson middle school. We are not afraid to defend children! @DefendingEd #defendinged
Watch the meeting. livestream 7 pm https://t.co/ayMLqv9aMW pic.twitter.com/FVqLV54aG3

Hours later, as the crowd of 100 people spoke their truth to power, the verdict was in: Moms win.

Harry, an expert in counterterrorism, cybersecurity and intelligence, wore a shirt that said it all: “PARENTS ARE NOT DOMESTIC TERRORISTS.”

Bullhorn in hand, former school board member Elizabeth Schultz walked the phalanx of about 100 parents, grandparents and community members and led them in a chant: “We the parents! We the parents!”

Dear AG Merrick Garland,
“We the parents!” Oct. 7, 2021, brave parents chanted before the @fcpsnews board meeting, refusing to be intimidated by your edict, turning the FBI on us. Inside, they spoke boldly. End your war on parents.
— a mom aka “Domestic Terrorist” @defendinged pic.twitter.com/NWfYGbdFh8

Just three days earlier, on Monday, October 4, U.S. Attorney General Merrick Garland had just declared a war on not only parents but grandparents who are attending school board meetings across the country to advocate for America’s children, dispatching a letter summoning the FBI against parents. But we are defiant.

The next day, October 5, at Parents Defending Education, we exposed Garland’s conflict of interest with his son-in-law’s company, Panorama Education, profiting off the backs of America’s children, data mining their innocent minds about sexuality, brain health and other invasive areas that invade the privacy of children. A local mother had sent us the tip. The month before, we had disclosed that Fairfax County Public Schools had signed a $1.8 million deal with Panorama Education. The mother also discovered that the contract quietly increased to $2.4 million. One mother.

Another mother learned that Fairfax County Public Schools sent Panorama Education data on children before parents even could opt out of the survey.

It’s now a national issue, with calls for hearings and investigations.

And parents pointed out the conflict of interest in their signs.

These are snapshots from the “Parents Pep Rally” held before the school board meeting that should send one clear message to Merrick Garland and the National School Board Association: nobody is going to get in between mama bears, papa bears — and grandparent bears — and the cubs in their care. 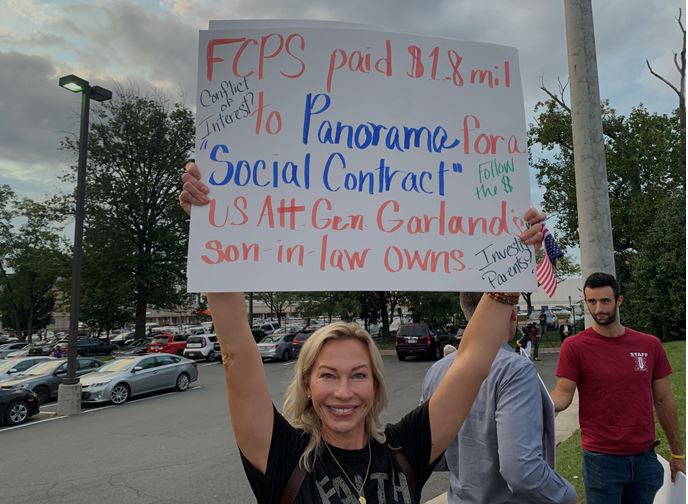 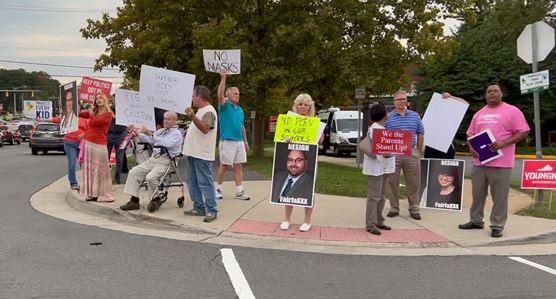 Please post your images of your defiance and use the hashtag #WeTheParents or send them to me via direct message or email at asra@defendinged.org, and I will post them here and then to our #WeTheParents album.

These are portraits of modern-day courage.

In the meeting, a grandfather sat behind a “CAUTION” tape, his walker propped up in front of him, undeterred.

Asra Q. Nomani, Fairfax County journalist, is vice president for strategy & Investigations of Parents Defending Education. This column has been republished with permission from Asra Investigates on Substack.