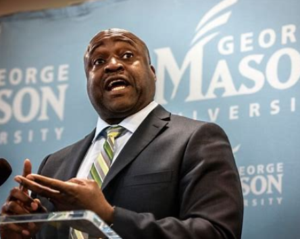 As part of a new “anti-racism” push, George Mason University plans to discriminate based on race in favor of faculty of color. On July 23, Dr. Gregory Washington, the president of GMU, announced that “We will develop specific mechanisms in the promotion and tenure process that recognize the invisible and uncredited emotional labor that people of color expend to learn, teach, discover, and work on campus.”

Dr. Washington announced these proposals in the context of the “national conversation” about race following “the murder of George Floyd.” His goal is “establishing George Mason University as a national exemplar of anti-racism,” with a “metric-driven,” mandatory “vision” of “anti-racism” to be pursued by each “college and school,” incorporated into the “university’s planning and budgeting process.”

That includes a “Task Force on Anti-Racism,” “systems and standards of anti-racism,” “required diversity, inclusion, and well-being coursework,” and the mandatory inclusion of an “anti-racism statement on all syllabi.” An initial $5 million is pledged for campus initiatives promoting anti-racism and diversity.

But legally speaking, the changes he proposes to the promotion and tenure process are themselves racially discriminatory.

It is not just “people of color” who “expend” “uncredited” labor, yet the mechanisms he proposes recognize such contributions only from minorities, not whites. With certain exceptions, the civil-rights laws forbid discrimination against whites. This racial discrimination is unconstitutional. (White faculty sometimes tutor and help disadvantaged and minority students, sit on diversity committees, or serve as advisors to minority student groups).

A government entity like George Mason University can engage in racial discrimination against whites only if it has a compelling reason for doing so, and the discrimination against whites is necessary and narrowly tailored. Outside the context of college admissions, race is supposed to be used only as a “last resort,” after race-neutral alternatives have been tried. (See Bartlett v. Strickland (2009)).

Also, black people’s history of discrimination does not justify preferences in favor of “people of color” in general. Past discrimination against one racial minority (such as black people) does not justify racial preferences for another minority group (such as Asians or Eskimos). The Supreme Court faulted the City of Richmond for including Eskimos and Aleuts in an affirmative-action program when there was no history of discrimination against such groups. (See Richmond v. J.A. Croson Co. (1989)).

Courts have struck down racial set-asides when they included minority groups such as Asians that lacked black people’s history of being discriminated against by the government using the racial preference. (See L. Feriozzi Concrete Co. v. Casino Reinvestment Dev. Auth. (2001)).

President Washington has mentioned the fact that GMU’s faculty are whiter than its student body. But that is legally irrelevant and not a reason to use race in faculty hiring. The faculty have special qualifications that students do not, and faculty were mostly hired at a time when the qualified applicant pool was whiter than it is today, due to America’s changing demographics. Comparing the racial breakdown of faculty to students is like comparing apples to oranges, legally speaking. The Supreme Court said that not even unintentional discrimination (“disparate impact”) is shown by comparing the racial breakdown of different components of an institution that have very different qualifications. It did that in rejecting a discrimination lawsuit against an employer that had an overwhelmingly white skilled workforce, and an overwhelmingly minority unskilled workforce. (See Wards Cove Packing Co. v. Atonio (1989))

Moreover, most courts say that the government can use race-based affirmative action or other special treatment only to remedy intentional discrimination, not racially “disparate impact.” (See, e.g., Builders Association v. County of Cook (2001); People Who Care v. Rockford Board of Education (1997); Michigan Road Builders v. Milliken (1987)).

The likelihood of discrimination in hiring is increased by the anti-racism plan’s “metric-driven,” mandatory “vision” of “anti-racism” to be pursued by each “college and school.” “Metric-driven” could easily amount to a racial quota for people of color. Even “goals” or other metrics can constitute illegal racial quotas in the eyes of the courts. For example, an appeals court ruled that auditing institutions that do not meet certain racial metrics constitutes an illegal racial quota, even when the audits don’t necessarily lead to a finding of racism. (See Lutheran Church–Missouri Synod v. FCC  (1998)).

The Supreme Court does not accept this broad approach to using race as a “remedy.” It generally confines the use of race to eliminating the present effects of recent, widespread discrimination. (See, e.g., Richmond v. J.A. Croson Co. (1989)).

In short, the bible of “anti-racism” is at war with the constitutional guarantee of equal protection, as defined by the courts.

Depending on how it is applied, GMU may also run into legal problems with its mandatory inclusion of an “anti-racism statement on all syllabi.” Faculty can certainly be required to pledge not to discriminate on their syllabus, and to include on their syllabus a notice that they comply with the civil-rights laws. But that may or may not be what GMU has in mind with its “anti-racism” statement.

To most proponents, “anti-racism” does not mean simply being non-racist, as Dr. Kendi, and other sources (such as CBS News, Psychology Today, and Vox) state. “The opposite of ‘racist’ isn’t ‘not racist,’” Dr. Kendi writes. “It is ‘antiracist.’”

This version of anti-racism also involves factual beliefs at odds with what many faculty have found in their research. For example, Dr. Kendi, in views celebrated by the New York Times, says that “When I see racial disparities, I see racism.”

Racial disparities exist everywhere in society and the world, often for reasons unrelated to racism, as black economists like Walter Williams, Glenn Loury, and Thomas Sowell have noted.

Forcing academics to endorse the view that racial disparities are due only to racism — not other factors — would require GMU faculty — such as economics professor Walter Williams — to repudiate their own publications, and say something they believe to be false.

That raises serious First Amendment issues. Compelled speech can violate the First Amendment, as the Supreme Court noted in striking down loyalty oaths for college faculty. (See Keyishian v. Board of Regents (1967)).

Colleges have greater ability to limit in-class speech than out-of-class speech. But even in class, courts sometimes strike down restrictions on their in-class speech. For example, a federal appeals court ruled in favor of a college professor who used the N-word to discuss racism. (See Hardy v. Jefferson Community College (2001)).

Freedom of speech also includes freedom from compelled speech. For example, an appeals court ruled in favor of a professor who was ordered to change a student’s grade. The court said it was fine for the college to change the grade, but it could not force the professor to do so against his conscience, because that was unnecessary compelled speech. (See Parate v. Isibor (1989)).

Hans Bader is an attorney living in Northern Virginia. This column was republished with permission from Liberty Unyielding.