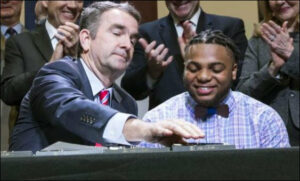 In the Age of Donald Trump and the Resistance, it’s hard to find anything that most Americans agree upon. But one is that society — working through government and nonprofits — can do a better job of helping kids removed from the custody of unfit parents. In Virginia, unfortunately, the state’s foster care system is the very stereotype of dysfunctional government. Accordingly, great stock is being placed in a foster-care reforms and a public-private partnership highlighted by Governor Ralph Northam yesterday.

The cynic in me wonders how well these initiatives are thought through. Do they address symptoms or underlying problems? Will they benefit the intended beneficiaries or just create a new self-perpetuating bureaucracy? I lean toward the view that the programs will help. I see no downside, no potential for harm. And unlike many social-engineering schemes, they require only modest sums of taxpayer money.

In the wake of a devastating indictment of the foster care system by the Joint Legislative Audit and Review Commission (JLARC), the General Assembly approved $3.7 million in added funding for child welfare agencies. A new director-level position in state government will oversee the health and safety of children in the state’s care. The state also has new powers to intervene when local child welfare agencies are botching the job.

The public-private partnership with Virginia’s Kids Belong will seek to address another endemic problem — an insufficient supply of foster care parents. About 500 youth age out of Virginia’s foster care system without being placed in a permanent family, one of the worst rates in the country. Reports the Virginia Mercury:

The idea, [Virginia Kids Belong President Janet] Kelly explained, is to connect government, faith, business and nonprofit groups to help support “children, families and workers in Virginia’s child welfare system.” The hope is to accomplish that through both grassroots efforts like community organizing and a “grass-tops” push like a government-led awareness campaign and legislative changes.

The JLARC report noted that children have been entering foster care at younger ages, and that younger children constitute a higher percentage of the foster-care population than in the past. This trend, JLARC concludes, is tied to an increase in parental drug abuse. If the number of children suffering abuse and neglect is increasing, it stands to reason that local social services organizations need more employees to handle the bigger case load. So, the extra funding  appears to address a real issue.

The harder problem to finding more suitable foster care parents. I can readily imagine the challenge. Raising children requires an extraordinary commitment. Men and women who create loving homes for someone else’s children — often children who suffer emotional problems from neglect and abuse — are absolutely heroic. I have the greatest admiration for them.

But such selfless people are in short supply in our society. The fact is, fewer people want children — and, among those who do, they want fewer children because children require a bigger financial and emotional investment than at any time in our history. Another problem is that the natural caretakers in our society, typically middle-aged women, are burning the candle at both ends. They are looking after elderly parents as well as their own children. Yet another issue, I suspect, is the increasing prevalence of anxiety, depression, autism, ADHD, and other mental health issues. If your own kid has behavioral issues, how likely are you to bring into the house another kid who might subject the family to even more drama?

Kelly says that campaigns similar to Virginia Kids Belong in Oklahoma and Tennessee have increased the number of foster families by more than 40%. If she’s right, the program can make a huge difference for thousands of Virginia kids. I believe in making small experiments that can be easily unfunded and undone if they don’t meet expectations. If they succeed, everybody wins. If they don’t, we learn from the failure and move on.

This entry was posted in Children and families, Social services and tagged James A. Bacon. Bookmark the permalink.