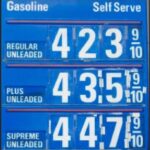 Virginia Democrats are calling upon Governor Glenn Youngkin to combat rising gasoline prices by declaring a state of emergency and activating the anti-price-gouging law.

“Governor Youngkin has the power to act and help protect Virginians at the pump, but so far, has failed to do so. Instead, he continues to point fingers and waste precious time,” Eileen Filler-Corn, the House of Delegates minority leader said earlier today. “Virginians do not need talking points and failed campaign promises — we need leadership and action.”

This idea is wrong on so many levels. While I disagree with Democratic lawmakers on most issues, I count on them to maintain at least a tenuous connection with economic reality. I can draw only one of two conclusions. Either Democratic leadership is woefully illiterate about economics or it assumes that the American people are illiterate — and they can get away with peddling snake oil. Either way, it’s bad news.

Republicans have not impressed me with the power of their analysis either — they, too, have over-simplified the causes of rising oil prices in order to score partisan shots — but they haven’t been as abjectly wrong. Or hypocritical.

Let’s walk through the economics of gasoline prices.

The reason the price of gasoline in Virginia has surged in the past week is that the price of oil has surged across the supply chain in response to the sanctions against Russian petroleum.

This chart shows the volatility of oil prices of West Texas Intermediate crude oil over the past ten years. 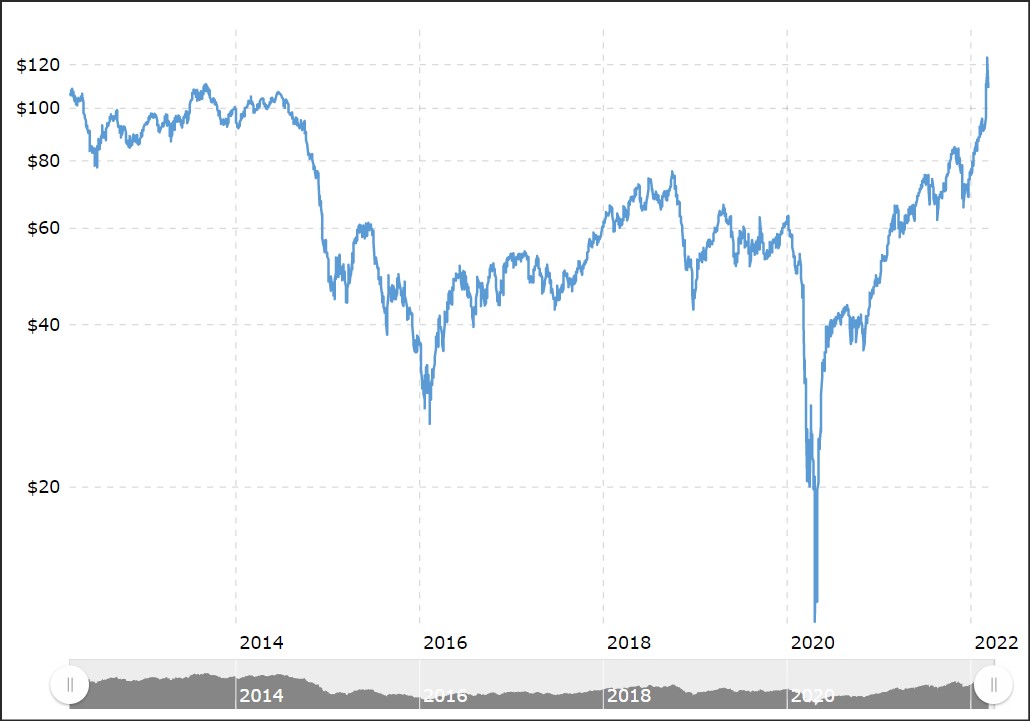 For many years, pundits predicted that the world had reached “peak oil” and that a price of $120 per barrel likely represented a new floor. But then came the fracking boom. Surprise! U.S. production exploded, the U.S. became the swing supplier in global oil markets, and the price dropped to a relatively stable band of $40 to $60 per barrel. If the price fell lower, marginal producers would shut down wells, supplies would shrink and the price would self-correct. That pattern lasted several years but it was not sustainable, mainly because the fracking boom was fueled by excess investment. Frackers drove the price too low, and many lost money. The market had to move to a new equilibrium at a higher price.

Then along came the COVID epidemic. Governments around the world shut down their economies, and the demand for oil slumped. In 2020 the price of oil collapsed. And so did the price of gasoline at the pump. As much as Republicans would like to blame the entire increase since 2020 on Biden, a rebound in the price of oil and retail gasoline was inevitable when the economy (and demand) recovered.

Here’s where the Republicans are right: Biden has pursued an anti-fossil fuel policy, shutting down the Keystone pipeline, creating regulatory hurdles for gas pipelines, curtailing drilling on federal lands, and doing everything the environmental zealots in his administration can think of to stifle the industry. Meanwhile, Biden’s allies worked to persuade hedge funds and pension funds to dis-invest from oil companies in the hope of starving the supply side. The fact is that environmentalists want the price of oil to increase because that makes renewable energy sources more economically competitive, and combating climate change trumps all other considerations. So, when Democrats weep about higher gasoline prices, they are being monumental hypocrites. All they really want is to avoid the blowback from their policies.

Dems do raise one point that has a pinch of plausibility. They say the price of oil is set by global supply and demand, not by U.S. production, and that their curtailment of new U.S. oil and gas development has not had an appreciable effect on supply. This is partly true and partly untrue. The argument ignores the fact that the U.S. has become the world’s swing supplier. For many years, the global price of oil has been set by U.S. producers. On the other hand, many oil-and-gas projects have long development lead times, and, even if they had gotten Biden’s regulatory OK, it would take months or years for them to ramp up production.

Now, let’s talk about emergency orders and price gouging. The United States is not experiencing a supply “emergency” like the localized disruption caused by the shutdown of the Colonial Gas Pipeline a year ago. That was an emergency — the pipeline was being held for ransom. The supply of gasoline to gas stations was shut off, and there was nothing to replace it at any price. I have contended elsewhere that enforcement of the price-gouging statute served no good purpose, but I can’t argue that there wasn’t an emergency. However, the situation today is not remotely comparable. Prices at the pump are being driven by global shifts in supply and demand, not localized disruptions in supply.

Dems want to exonerate Biden for any blame for high gas prices nationally, citing global supply and demand factors, but here in Virginia they want to treat high gas prices as a localized emergency that Youngkin can influence. Sorry, they can’t have it both ways.

There’s another problem. The Virginia Post-Disaster Anti-Price Gouging Act was written to deal with the aftermath of… disasters. Events in the Ukraine and Russia are not a “disaster” in Virginia, as defined in Virginia law.

The Act prohibits gasoline retailers from making “unconscionable” price hikes. However, the law specifically exempts retailers who boost prices in response to increased supplier costs: “Proof that the supplier incurred such additional costs during the time of disaster shall be prima facie evidence that the price increase by that supplier was not unconscionable.”

When prices are shooting higher across the petroleum-to-gasoline supply chain, that’s not price gouging. We’re seeing rational adjustments to supply and demand. The best thing Youngkin can do is… nothing. Prices send signals that enable economic actors to behave rationally. Blocking those signals helps no one.

This entry was posted in Energy, Regulation, Uncategorized and tagged James A. Bacon. Bookmark the permalink.