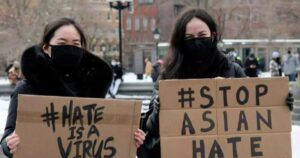 Attorney General Mark Herring has long made an issue of the rise in hate crimes and white supremacy, which he has conflated as largely one and the same. As he runs a tough campaign for the Democratic Party nomination, he continues to put hate crimes front and center. Besides re-launching a NoHateVa.com section on the attorney general’s website, Herring is leading a virtual discussion with AGs from other states on the hate crime topic du jour, the rise of anti-Asian hate, this afternoon. You can tune in here at 1:00 p.m.

“This rise in violence and hate against Asian Americans must stop,” proclaims Herring on the NoHateVa website. “It has been fueled by the hateful anti-Asian rhetoric that has plagued our country over the past year, at times even coming from the highest office in the country” — a barely disguised allusion to former President Trump who supposedly, by insisting upon referring to the COVID-19 virus as the Wuhan Flu, Kung Flu or China virus, stimulated the current wave of anti-Asian rhetoric.

Given the polarization and vitriol of political discourse these days, I am prepared to believe that hate crimes have increased over the past year. And I would not be surprised if the surge is tied in part to a spread in white supremacist ideology on the right-wing fringes. But I suspect that the phenomenon is far more complex than commonly understood. And, until Herring can offer more than anecdotal evidence plucked from headlines around the country, I am not inclined to accept his interpretation of what is happening in Virginia.

Herring frequently invokes hate crimes in other states to justify the necessity of enacting anti-hate crime measures here in Virginia. Perhaps there has been a flood of anti-Asian hate crimes here in the Old Dominion. I don’t know the truth of the matter. I don’t have the data, and we won’t get a better feel for what’s has happened over the past year until the Virginia State Police publishes its 2020 Crime in Virginia report. But Herring doesn’t know the truth of the matter either. He’s got his narrative, and he’s flogging it hard.

Let’s just say I’m skeptical that referring to the coronavirus as the Wuflu has unleashed a wave of hatred.

National media have pounced on the tragic Atlanta spa killings by a white male as evidence of anti-Asian racism. Six of the eight people killed were of Asian ethnicity. No motive has been established, although some reports say the killer had a sex addiction and was lashing out against the massage parlor where many Asian women happened to work rather than targeting Asians specifically. No word of the killer’s views on the KungFlu. But that hasn’t stopped many people from linking the slayings to other incidents from around the country.

My first question is this: Is this supposed wave of killings, assaults, and other race-based incidents against Asians a real increase, or is it a media-created furor ginned up for political reasons by highlighting incidents that otherwise would have gone unnoticed? Violent crime has surged in many major cities over the past year. Is the uptick in assaults against Asians any different than the increase in crime against whites, blacks, and Hispanics? We don’t know until the complete data is reported.

The limited data available today is ambiguous. A fact sheet published by the Center for the Study of Hate and Extremism compiles anti-Asian hate crimes in 16 major cities, increasing in number from 49 in 2019 to 122 last year. The biggest increase occurred in New York City: from three to 28. Last time I checked, New York was not a stronghold of white supremacists… or even political conservatives. Also, last time I checked, crime was up generally in New York. If Trump voters were responsible for the surge in attacks on Asian-Americans, one would expect to see more evidence in Red State country. I have seen no evidence to support such a conjecture.

My second question is this: Who are the assailants? The news stories rarely say. They let the reader or viewer assume that bigoted white Trump voters are behind the hate crimes. But there is ample anecdotal evidence that many of the perpetrators of hate crimes against Asians are African Americans. Hate crimes against Asians are wrong no matter what the racial identity of the attacker. But if the postulated upwelling in incidents in part reflects animus originating from the African-American community, it cuts against the narrative that the problem originates with Trump, Trump voters, bigoted whites and white supremacists. Let me be clear: I don’t know the answer. But either do people flinging around loose, unsubstantiated charges.

If I had to speculate, I would guess that there has been a modest increase in assaults on Asian-Americans, that some of the attacks have come from African-Americans and some from whites.

The media has shown zero interest in widespread anti-Asian prejudice in the African-American community. Here in Virginia, however, some of that animus has surfaced in the controversies over admittance policies to elite Governor’s Schools, most notably science- and math-oriented schools in Loudoun and Fairfax Counties. African-American parents have complained bitterly that the schools admit too many Asians and too few blacks and Hispanics. This rhetoric of resentment is not emanating from fringe white-supremacist groups in social media — it’s coming from parent groups and school officials.

As for anti-Asian sentiments in the white supremacist movement, I am dubious. I don’t frequent neo-Nazi and KKK websites so I cannot claim any intimate familiarity with white-supremacist thinking. I depend upon what I read in the mainstream media (admittedly a biased and unreliable source). My impression is that white-supremacist rants are directed mainly against blacks, Jews, and Hispanics, not Asians. I may well be wrong. But if Herring and his ideological soul mates want to blame white supremacists for the alleged upwelling of anti-Asian violence, they need to document their case.

I would add one more element to the mix: the manifest bias of the so-called mainstream media, which has abandoned even the pretense of objectivity, combined with the de-platforming of many conservative voices. I suspect that more and more people of a conservative persuasion are being driven to social media sources where echo-chamber effects prevail, allowing conspiratorial and extremist views to flourish without contradiction. In other words, Herring and his media fellow travelers may be exaggerating the rise of right-wing extremism in their effort to tar Trump voters and conservatives generally, but they may not be entirely wrong about it. Fact- and reality-based conservatives must combat deluded thinking on the far right, even if it means admitting that the Herrings of the world might be a teeny, weeny bit right about something.

Still, we won’t know the truth of the anti-Asian racism claims until the facts come in. And in this era of inflamed emotions, it is prudent to withhold judgment until they do.

This entry was posted in Crime , corrections and law enforcement, Media, Race and race relations and tagged James A. Bacon. Bookmark the permalink.