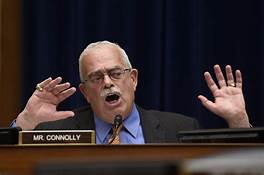 Representative Gerald Connolly, D-Va., and other congressional Democrats have written Governor Ralph Northam, calling for the expulsion of students at the Virginia Military Institute who have been found guilty of “racist or discriminatory conduct.”

Citing a Washington Post article that alleged the existence of “relentless racism” at the military institute, the letter from the House Armed Service Committee decried “lynching threats, professors openly reminiscing about the Ku Klux Klan, a campus culture that venerates the Confederacy and little to no disciplinary action by VMI.”

“We are dismayed that racism is tolerated and has been allowed to persist throughout VMI,” says the letter. The congressmen made three requests:

Northam, who is launching a state investigation into the racism allegations, did not respond directly to the letter, but in comments to the media yesterday said, “We want to make sure that every college and university in Virginia is open, that they’re welcoming, that our students and their families feel comfortable on those premises.”

Warning to the rest of Virginia: Northam, a VMI graduate himself, said that the issue extends beyond VMI. “While VMI is under the spotlight right now, this is something that is statewide, and we’re going to look at all of our colleges and universities and make sure that we really do everything we can to promote diversity, equity and inclusion.”

Bacon’s bottom line: If Connolly’s logic prevails, “racist conduct” will become an offense that warrants expulsion. Connolly advocates the conducting of “climate surveys” to gauge the extent of “racist beliefs.” The unavoidable question is what constitutes “racist beliefs,” and who decides?

Well, the way things work today, the definition of racism is continually mutating, and the media — in particular the Washington Post — seems to be the arbiter these days. This process can be seen in today’s article by the Post’s Ian Shapira, who has dredged the social media for expressions of racism by VMI cadets.

It seems that many cadets who post to Jodel (pronounced Yodel), a social media platform geared to the service academies, are not responding well to accusations that they and VMI are racist. Here is the first post cited by Shapira:

I’m sorry but to the cadets [who] reported to the Washington Post you are the reason we are more divided. You decide to be a professional victim and bitch and complain,” one student posted. “Someone is making a racist joke. GET OVER IT. Comedians can make them. Why can’t I. Everyday in Crozet” — VMI’s dining hall — “black cadet[s] separate yourselves by sitting in the corner of crozet and sometimes acting foolish.

Can you see what’s happening here? The implication is that calling a black person a “professional victim” is not just an unflattering description of their attitude but racist. Asking a black person to “get over” a racist joke is itself racist. Observing that black cadets self-segregate in the dining hall is racist. Shapira confers legitimacy to any complaint lodged by African Americans but imputes racism to anyone who would defend the Institute or criticize the critics.

Shapira cites another such example of a Jodel poster.

To the cadets that drag VMI through the dirt…You misrepresent who we are as a school,” one person posted. “The press takes the words of a few and magnifies it to epic proportions and call[s] it reality. YOU ARE THE PROBLEM. I’m not a racist I’m a realist.

Shapira’s implication is that the poster’s statement is racist. This is right out of Critical Race Theory — if a white person denies he’s a racist, that’s just proof that he’s racist.

Jodel posts, says Shapira, often demean VMI athletes, many of whom are black, as “permits.”

One cadet fumed over the weekend at the sight of three Black football players apparently dressed inappropriately. “I can’t correct s—ty black football rats without being racist [f]or targeting them. . . . Guess they can live on knowing [t]he entire corps hates them and their class hates them,” the cadet wrote. “If they were good enough to get into another school for football, they wouldn’t be here.”

Shapira quotes a black cadet as explaining that the term “permits” has become a proxy for the n-word. “White cadets, he said, resent Black students for their Division I scholarships and their ability to skip out on military exercises.”

In other words, it’s racist to perceive favoritism toward black athletes and express resentment of that perceived favoritism. And it’s racist to object to the prevailing standards that make it impossible to gripe about favoritism accorded black football players without being called a racist.

Let me be 100% clear here. I am not defending the sophomoric and offensive language these cadets are using online. Nor am I contesting the idea that it is the obligation of the VMI administration to foster an environment that is welcoming to cadets of all walks of life. Like every public higher-ed institution, VMI must strive to be inclusive.

But I am saying that Shapira is pushing the boundaries of what constitutes racism. Anyone who pushes back against accusation of racism is himself deemed racist. Anyone who expresses views about race with which Shapira disagrees is a racist.

Here is where we’re heading: If you disagree with the progressive, social-justice paradigm of the United States and its institutions as systemically racist, you’re a racist. If you express racist thoughts, you are guilty of racist conduct. If you are guilty of racist conduct, you can be expelled from VMI. Your thought crimes in opposition to the social justice movement will get you expelled. Hello, George Orwell.

That’s just crazy, you say. Things will never go that far. Really? Two years ago, people mocked conservatives when they warned that those who wished to remove the Civil War statues come would after statues of slaveholders George Washington and Thomas Jefferson. Turns out, we weren’t pessimistic enough. Now the mob is targeting statues of Abraham Lincoln and Frederick Douglas. Social justice zealots know no bounds. In the quest for power, they seek to delegitimize all of our institutions. VMI, with its roots in the ante-bellum South, is low-hanging fruit. But precedents are being set that should terrify us all.

This entry was posted in Culture wars, Media, Race and race relations and tagged James A. Bacon. Bookmark the permalink.