Stonewall Jackson: Getting It Right 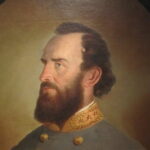 Newspapers aren’t what they once were. That’s especially true for the lean local papers that serve our area.

They’ve laid off staff, farmed out editing and rely heavily on wire copy from the national newspapers.

Yes, there is a knot of earnest young reporters trying desperately to cover the region, but they don’t have the numbers for comprehensive coverage and they’re all working without a net. Shoot, newspaper staff no longer have a building since the old Pilot offices on Brambleton Avenue were sold and The Daily Press headquarters in Newport News was shutdown last month.

There was a time when any story with even the most tenuous Virginia connection was covered aggressively by local staff writers. After all, they knew the commonwealth. Those big-shot, out-of-town scribes who parachuted in for the occasional national story didn’t.

Lately, however, even Navy stories are coming from the Associated Press and coverage of the alleged racial strife at the Virginia Military Institute are brought to readers courtesy of The New York Times.

For example, yesterday’s breaking news story: “Head of Virginia Military Institute Resigns Amid Review Of Systemic Racism on Campus,” ran in both The Daily Press and The Virginian-Pilot on Page 2. This simple eight-paragraph piece illustrates why a lack of local coverage is regrettable.

AFTER the Civil War.

That would have been impossible, as several irate readers of the newspapers who listen to my WNIS radio show were quick to point out first thing Tuesday morning, before I’d even seen the papers.

Virtually every Virginian knows that Stonewall Jackson was mortally wounded at the Battle of Chancellorsville. A quick internet search reminded me that he was hit by friendly fire on the night of May 2, 1863, shot three times. One of the bullets blew off most of his left arm, which had to be amputated the next day.

Jackson died of pneumonia eight days later. This is not a little-known fact.

Jackson graduated from West Point, fought in the Mexican War and returned to Virginia to teach at VMI in 1851. He stayed in Lexington for 10 years, leaving the school in 1861 to join the Confederate Army. He expected to return to VMI after the war ended.

Writing that Jackson became an instructor at VMI after the Civil War was a sloppy mistake. The sort of error that the once-great The New York Times used to guard against with its army of fact-checking copy editors. Seems even that paper is cutting back.

It’s the sort of glaring factual blooper that never would have found its way into our local papers when reporters were still in charge of local stories and crusty, exacting editors roamed the newsrooms.

Those days are gone. We’re all the poorer for it.