Colin Greene and the Emergence of Richmond’s Deep State 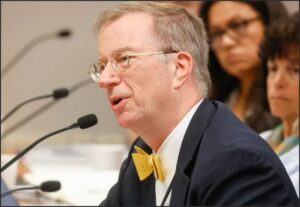 Colin Greene is still state health commissioner, but I’m predicting he’ll have to pull a Ralph Northam in order to last in his position. After he dared  to express skepticism that “structural racism” is a useful explanation for racial health disparities, the left is eager to take him out. Even issuing abject apologies and embracing leftist nostrums about health care may not suffice to save him. Defenestrating Greene would kneecap Governor Glenn Youngkin, who has so far managed to survive the assaults on his administration unscathed.

We can see how the game is being played in a story published yesterday by the voice of Virginia’s cultural elites: Virginia Public Media, the foundation-supported arm of taxpayer-subsidized National Public Radio.

Greene, VPM reports, has asked “at least two employees” to provide medical documentation to support requests to continue working remotely over the coming year. While VPM concedes that it is “not unusual” for employers to review such records, the employees affected said they expected to turn over their paperwork to the HR department, not to Greene. They “expressed concerns” over who would have access to the documents and how the information would be stored.

There is zero evidence that Greene has done anything wrong, but two disgruntled employees fear that he might do something wrong. Somehow, this concern warranted a journalistic deep dive.

We’ve seen this scenario played out before, usually in the nation’s capital. Public employees embedded in the bureaucracy oppose the policies and/or ideas expressed by a politically appointed official. The employees leak their concerns to a friendly media. Typically, though not always, the media provides the employees the protection of confidentiality. Once channels of communication between disgruntled employees and the media are established, the leaks, charges and allegations keep coming. Eventually, the official is seen as a liability and let go.

That appears to be what’s happening here.

Virginia media did cover some of Ralph Northam’s manifestly inept performance during the COVID epidemic, but his health commissioner, Norman Oliver, was personally untouchable. The media never saw fit to question Oliver’s competence. During Virginia’s greatest public health challenge of the past century, the state health commissioner receded into the background.

Now that we have a Republican governor, the media plays by new rules. Team Northam staffed the Virginia Department of Health (VDH) with employees dedicated to the proposition that racism is a threat to the public health, that racial disparities in health outcomes are the result of structural racism — not poverty, not differences in behavior, but racism. Those employees stayed on with the Youngkin administration. Youngkin appointed Greene, a public health official with a different philosophy and, apparently, a none-too-subtle way of expressing it. Employees committed to viewing every issue through the lens of race were offended. They took their story to The Washington Post, which eagerly took it up. After reporting the initial story of disgruntled employees, the Post and other media followed up with the reaction of Black Democratic legislators — they were outraged, of course — and then of Northam appointees on the State Board of Health.

Now that dissidents within the VDH feel empowered, they’re bringing up other issues they have with Greene, and the media is now demonstrating its willingness to report minutiae that might cast him in a bad light. Oliver got a pass for the Northam administration’s repeated policy missteps regarding a pandemic that resulted in the deaths of some 20,000 Virginians, but VPM is willing to parse the details of Greene’s role, affecting as few as two employees, in executing Youngkin’s telework policy.

During most of my career as a journalist, Virginia reporters and editors kept their personal political opinions to themselves and they strove to uphold the ideal of objectivity. A handful still do. But the media covering politics and public policy in Richmond have adopted the Washington model. The dominant media — The Washington Post, the Richmond Times-Dispatch, The Virginian-Pilot, Virginia Public Media — have abandoned any pretense of objectivity. Convinced that their viewpoint is the only legitimate one, they have aligned themselves with the Democratic Party, the cultural elites, and the well-funded progressive advocacy groups. The new, ominous development is that the Washington “leak” culture has penetrated the ranks of Virginia state government.

While we barely noticed, Richmond has developed its own “deep state” analogous to the monster that runs Washington.

That coalition, I believe, will target Greene for transgressing its dogma. Once the herd mentality gets going, attacks will continue until he is crushed and made an object lesson to anyone else who dares transgress progressive dogma.

This entry was posted in Health Care, Media and tagged James A. Bacon. Bookmark the permalink.