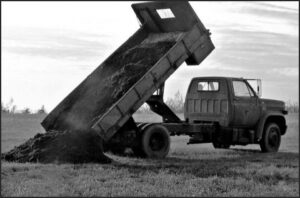 For a while, you couldn’t get dirt in Harrisonburg.

The developer who was helping bankroll city council candidates in 2000 told us about the dirt shortage. The city was buying up all the topsoil in town and using every city dump truck to put it somewhere near the then-proposed golf course.

Opponents of the golf course filed a Freedom of Information Act request asking how much had been spent on the project. The dirt was not included in the costs. I remember referring to the quarter-million dollars worth of dirt although I think it may have been only $240,000. But that didn’t include the cost of the trucks to load it and move it and pile it and stack it – whatever you do with dirt.

Three golf course opponents, including me, won the May city council election. We were scrounging for ways to stop the project before we took office and the lame duck council was justifying the bond commitment they were about to vote for. One of their arguments was how much had already been spent. When they listed the amounts they included the cost of the dirt.

Of course they did.

Despite everything that was wrong with the golf course debate, that’s one of the things that sticks in my mind. It wasn’t as if the City Council came out of executive session and voted to deceive the citizens of Harrisonburg. But the city government played both sides of the argument depending on what they needed the story to be at any given time. The dirt wasn’t for the golf course, and then it was.

Your government intentionally misled you. Stop the presses.

I was reminded of that today when I read a post on the Harrisonburg Redevelopment and Housing Authority’s Facebook page saying the proposed Bluestone Town Center would not hurt surrounding property values.

Nobody said it would.

But it’s part of the misdirection and misinformation about the project, mostly from one source.

That source, I should point out, is not Mike Wong. Mike has been the executive director of HRHA for 20 years, and has changed the agency from supporting city business decisions to actually providing housing for those who need it.

Maybe the person making that post just assumed the subject of property values had come up. It often does in zoning and development discussions. Or maybe that person was misleadingly trying to say that opponents of the project were only concerned about their property values.

There are several open questions about the Bluestone Town Center, many of them tracing to inaccurate statements by HRHA board chair Dany Fleming. These include whether residents of the project will come primarily from within the city and how much school populations will rise.

We have no way of knowing if the Facebook post about property values was encouraged or initiated by Fleming. We do know that Wong is in a difficult position.

Wong is an honest man who believes in this project. I happen to disagree with the project, but that doesn’t change my opinion of Wong. He’s a good guy. At the same time, when you’re appointed by a seven-person board, it’s difficult to publicly contradict or argue with those board members.

It’s fair to ask when the questions that have actually been asked will be addressed by the HRHA on its Facebook page or elsewhere. And it’s fair to ask what impact the chair’s campaign for council will have on those answers.

This column has been republished with permission from Still not Sleeping.

This entry was posted in Transparency and tagged Joe Fitzgerald. Bookmark the permalink.