Budgeting in the Time of COVID 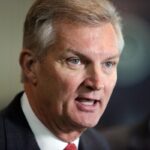 When last we read news reports about the ongoing budget negotiations between the General Assembly and Governor Ralph Northam, lawmakers said they were making “progress” but had not yet come to a resolution. One outstanding issue is how much money to put into General Fund reserve funds to buffer against revenue shortfalls stemming from the COVID-19 epidemic. Another is how much of the federal CARES Act revenue to spend now on coronavirus relief and how much to hold back for future needs.

I caught up with Secretary of Finance Aubrey Layne over the weekend, and he shared the perspectives that are shaping his advice to Northam, whom he describes as “middle of the road” fiscally and not inclined to accommodate all the spending demands emanating from the House of Delegates. Says Layne: “His instinct is to be cautious.”

Caution is called for, he adds, when there are so many economic and fiscal unknowns arising from the epidemic and the presidential elections.

The good news, says Layne, is that Virginia escaped the fiscal battering experienced by other states. He attributes our good fortune to two factors. One, which is widely acknowledged, is the large contribution of the federal government to Virginia’s economy. Federal employment was barely affected by the virus. Less widely appreciated is the fact that the commonwealth’s major private-sector employers also provide a stable employment base.

The largest 1,300 employers in the state — government, tech companies, defense contractors, shipyards — account for 52% of payroll withholding taxes, and their employment has increased slightly over the year. Economic pain and job losses were concentrated in firms generating $3.5 million per year or less in revenue. Layne doesn’t minimize the hardship of those small firms, but notes that the fiscal impact on the state was modest. “The worst hit industries don’t pay a lot. A lot of people were out of work, but they weren’t large payers of withholding taxes.”

Virginia’s revenue shortfall in FY 2020, ending June 30, was modest compared to that that of some other states. New Jersey, for instance, had to borrow $10 billion.

The flip side of the budgetary coin is that, having experienced only a modest downturn, Virginia will experience a muffled upturn. Further, warns Layne, the national economy is slowing. “It’s not as bad as people thought, but we’re not in the all-clear,” he says. “We’re probably 24 to 36 months before we’re back to normal. … We’re still in a pandemic. I don’t think full business confidence will come back until there is a trusted vaccine.”

Layne’s recommendations are based on the assumption that Virginia’s two-year General Fund revenue will fall $2.7 billion behind budget, but says he’ll have better information with the next official revenue forecast in January.

Early in the Northam administration, Layne spent much of his time talking to Wall Street and fending off a threatened downgrade to the state’s AAA bond rating. The administration restored investor confidence in Virginia’s bonds by bolstering financial reserves and the rainy day fund, which had been drawn down during the McAuliffe administration. He has urged rebuilding those reserves to protect the state from another 2008-style recession. The administration had planned to add another $900 million to reserves in fiscal years 2021 and 2022 when COVID-19 hit.

To limit the risk of a revenue downturn the next two years, the Northam administration is resorting to a rarely used technique called “unallotment.” Says Layne: “It’s a way of suspending spending, to buy time to see if our revenues come back.” The spending has been appropriated by the General Assembly, so the money is in the budget. But the funds won’t be spent without further action from the General Assembly and Governor Northam.

Anticipating a possible shortfall of $2.7 billion, the administration has “unalloted” the same amount. To preserve the continuity of existing programs, the unallotments will be focused on new spending programs, Layne says.  “The priority is protecting the base budget.”

Northam called a special session of the General Assembly to deal with police reform, appropriate funds to ensure the integrity of the November elections, and decide what to do with $300 million in carry-over funds from the previous budget that the governor had deliberately left unallocated. Lawmakers are proposing a bigger budget re-write than the Northam team had been banking on.

Virginia has until early next year to decide how to allocate its share of the coronavirus relief fund from the Cares Act. Layne doesn’t want to spend it all now. What if a vaccine comes out, he asks. It would be prudent to hold some monies in reserve in order to buy the vaccine and ensure that Virginians have access to it.

Layne is concerned about the lawmaking process in the time of COVID and a virtual legislature. “I’ve watched committees where speakers have 30 seconds before they get cut off. This is not the environment to rewrite the budget.” Expressing additional frustration with some legislators, Layne said, “Regarding risk and fiduciary responsibility, I might as well talk to the wall.”

This entry was posted in Budgets and tagged COVID-19, James A. Bacon. Bookmark the permalink.

15 responses to “Budgeting in the Time of COVID”