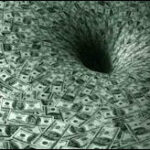 The U.S. national debt has passed a symbolically important milestone of $30 trillion. That’s up from the $13-$14 trillion when I wrote my book, “Boomergeddon,” in 2010 warning that the U.S. government was heading to functional insolvency by the late 2020’s or early 2030’s. I argued that higher deficits and debt were inevitable as Republicans and Democrats in Congress followed the path of least political resistance — more spending and lower taxes. The U.S. is careening toward certain fiscal crisis by 2033, when the trust fund for the Social Security system runs dry and payments to retirees are slashed to 76% of promised benefits.

One thing I did not take sufficiently into account in Boomergeddon was the resurgence in inflation caused by monetization of the debt. I thought the political class had learned its lesson from the 1970’s era of stagflation (stagnant growth + inflation), and would hold inflation in check. Higher inflation allowed government to repay its debt with cheaper dollars for a time, but investors demanded higher interest rates to offset that erosion plus they added a premium for uncertainty. The inflation rate in 1980 hit 13.5% and the federal funds rate peaked at 20%. Forty years later, it appears that those lessons have been forgotten. The Consumer Price Index rose 7% last year. And while it could subside, it will remain far higher than the 2% targeted by the Federal Reserve Bank.

The U.S. is now in a fiscal/monetary box.

Right now investors in Treasury instruments are being pillaged. Yields on one-year treasuries are 0.78%. Yields on 10-years are 1.81%, and on 30-years 2.12%. Investors will not long be willing to lose an inflation-adjusted 5% to 6% yearly on their supposedly safe-harbor investments. Let us imagine what will happen if interest payments on the federal debt increased by a mere two percentage points across the board.

The math is more complicated than saying that 2% of $30 trillion is $600 billion. That $600 billion in added interest payments won’t kick in right way. Only newly-issued debt would pay the new, high interest rates. Old debt won’t incur higher rates until it matures and has to be reissued at current market prices. About one-fifth of the federal debt matures in one year or less. Another two-fifths matures within one to five years, and the rest over five to 30 years. So, there’s a buffer. Still, the climb of higher payments on the debt is relentless and it is gargantuan.

Here’s the 2021 Congressional Budget Office projection of federal budget deficits measured as a percentage of the economy: 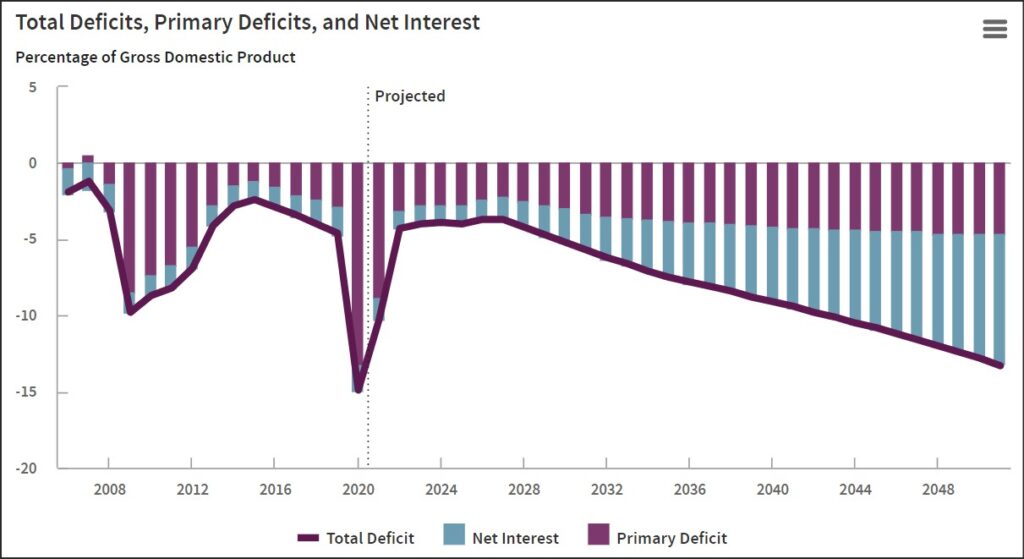 Alarmingly, this graph is optimistic: the CBO assumes inflation of 2.1% to 2.3% (depending upon the method used to calculate it) from 2021 to 2031. The CBO also assumes interest rates of only 1.5% for all federal debt held by the public during that period. With inflation running at 7%, that assumption is highly fragile. And it assumes a steady-state economy with no recessions between now and then.

How all this works out is difficult to predict. On the one hand, a 7% inflation rate means we’ll be repaying that $30 trillion debt with cheaper dollars. On the other hand, interest payments on the debt will swell with higher inflation and interest rates demanded by investors. Whether that’s a net gain or loss for Uncle Sam will depend on investor psychology. If fear of inflation gets worse, investors could demand a risk premium, meaning that interest rates could shoot higher than the inflation rate by itself would suggest.

Even in the absence of an investor revolt, the proverbial doo-doo will hit the swirling blade by 2033, when the Social Security Trust Fund runs out and payments drop to 76% of promised benefits, the level supported by revenues generated by payroll taxes. Unfortunately, Congress will have limited ability to make up the difference with more deficit spending. According to the CBO’s optimistic forecast, the primary deficit (spending exceeding revenue) will be 4% of the GDP that year, while interest payments on the debt will be 3%. The total deficit will be 7% of GDP. Remember, that’s the optimistic scenario.

With the population older and more dependent upon federal transfer payments than ever, once Social Security slashes its payout, the U.S. will experience massive social, economic and political dislocations not seen since the Great Depression.

Policy at the federal level is largely irrelevant now. The U.S.S. Titanic is running on autopilot on a collision course with the iceberg. So, what happens in 2033 when we collide? With federal finances in chaos, power will devolve to the states. Will Virginia be prepared? Will state and local governments be able to take up the slack? Or will they be mired in local fiscal crises of their own making?

This entry was posted in Federal, Finance (government), Uncategorized and tagged Boomergeddon, James A. Bacon. Bookmark the permalink.