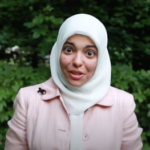 Of course you don’t.

It was delivered by some semi-important person from your community who read a boilerplate speech off 3×5 file cards. An unwritten rule of graduation speeches declared that speakers must expound on three things: “milestones,” “success” and the “future.” So, as he or she prattled on, you either dozed or daydreamed about the parties you were heading to as soon as you could ditch your cap and gown.

At their June 7 graduation, students were treated to anti-Israel firebrand Abrar Omeish, a member of the far-left Fairfax County School Board, who made news last month when there was a demand for her to resign over a nasty anti-Israel tweet:

Eid Mubarak! Congrats on 30 days of worship! Hurts my heart to celebrate while Israel kills Palestinians & desecrates the Holy Land right now. Apartheid & colonization were wrong yesterday and will be today, here and there. May justice + truth prevail.

Omeish generated national outrage over her Tweet but she didn’t back down. Perhaps she’s hoping to use her position on school board as a stepping stone to Congress where she can join The Squad.

Undaunted by criticism, Omeish ranted her way through a graduation diatribe on June 7 that she gave in multiple languages claiming — among other things — that Virginia was built on land stolen from the Manahoac people.

For extensive excerpts of this nutty speech, go to Luke Rosiak’s piece on The Daily Wire.

Lovely sentiments to be spreading to an audience with a very high number of children who are immigrants to the U.S. from a variety of countries.

Omeish frequently lapsed into Arabic and other languages. I heard the word “jihad” during one of her Arabic detours. The Daily Mail was able to translate:

But when she repeated the speech in Arabic, she told students to remember their ‘jihad’ – meaning holy war waged on behalf of Islam, according to Merriam Webster.

Great. Just what we want graduating from Virginia’s high schools. A bunch of brainwashed jihadis.

Her Libya-born father Esam Omeish, a surgeon, was forced to resign from the Virginia Commission on Immigration in 2007 when video emerged from the year before, showing him condemning Israel and advocating ‘the jihad way.’

In the recording of the Justice High school speech that I watched, the cameras were fixed on the speaker. There was no way to know how many — if any — parents marched up to their offspring, yanked them from their seats and dragged them away from this appalling claptrap.

At the very least, Omeish’s speech was inappropriate. Then again, her antagonistic attitude toward America and Western values is emblematic of what the left is doing to school children.

There’s only one way to get this poison out of the schools: Vote it out.

And bring back boring commencement speeches.