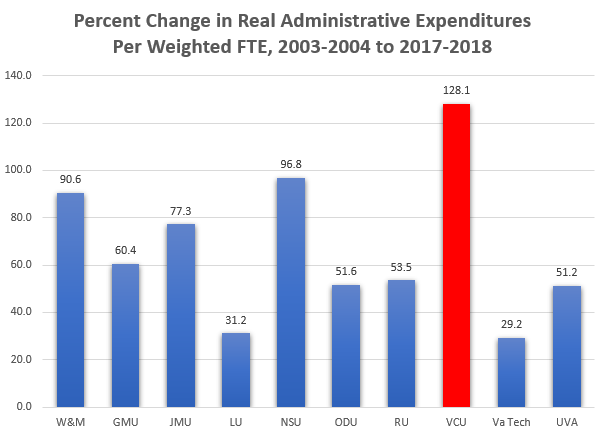 Recently, I told the story of how Virginia Commonwealth University, which prides itself for embracing minorities and first-generation college students, is enacting a left-wing social justice regime. While fostering a culture of minority victimhood and grievance, VCU charges its students $25,419 in tuition, fees, room, and board. Among the “students of color” who graduate, seven out of ten borrow money to pay their way through college. On average they entered the job market $31,500 in debt.

Where does all this money go? Does it actually cost $25,400 a year to provide a residential four-year education? Or does the tuition support a bloated administrative structure that serves the pay, perks and priorities of college administrators and faculty? Now, thanks to James V. Koch, economist and president emeritus of Old Dominion University, there is a way to answer those questions.

Administrative costs at VCU amounted to $5,800 per weighted, full-time-equivalent (FTE) student in the 2017-18 academic year, according to data Koch compiled for his forthcoming book, “Runaway College Costs.” Among the ten Virginia public higher-ed institutions surveyed, VCU has seen the greatest percentage increase — 128% — in inflation-adjusted administrative costs over 14 years. 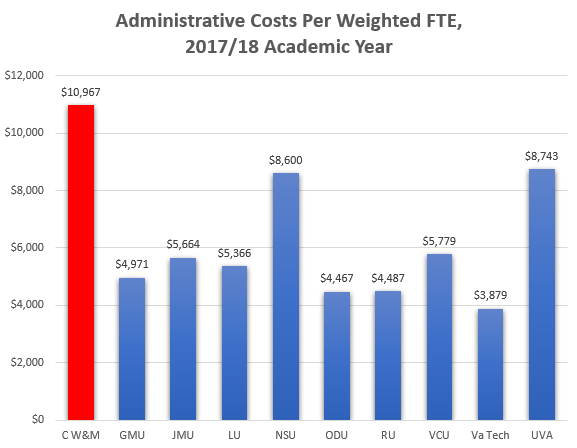 By comparison, Virginia Tech’s administrative costs are roughly $3,900 per weighted FTE student. If we use Virginia Tech as a benchmark, VCU students are paying a minimum of 1.900 more per year — $7,600 over the course of a four-year degree program — for bureaucratic bloat. (Low faculty productivity is a different source of high tuition costs, which I hope to address in a separate post.)

On the other hand, it must be said that VCU is not the worst offender. That honor goes to the College of William & Mary, which, by Koch’s measure — spends roughly $11,000 per student on administrative overhead. Little wonder that W&M has the highest tuition, by far, of any Virginia public university.

As I have argued repeatedly, the real “structural racism” that exists in American society is usually found in places and institutions run by liberals and progressives — not just criminal justice systems in places in inner-city hell holes like Baltimore and Chicago, but in K-12 education, health care, and higher education pretty much everywhere. Progressives enact and execute policies that exacerbate the misery they seek to ameliorate.

From a social justice perspective, higher education is best regarded as a mechanism for extracting  wealth from students and transferring it to the faculty and staff elites who run the institutions. Every student pays excessive tuition, but the cost falls most heavily upon the poor and minorities who can least afford it. The senior administrators and tenured faculty who benefit most from this system are disproportionately white.

That is the way I frame the issue, not Koch. In our correspondence, he has neither endorsed nor disputed my narrative of higher-ed institutions as engines of wealth redistribution.

A brief discussion of methodology

Before we go any further, let me explain how Koch got his numbers. Higher-ed institutions report extensive financial and enrollment data to the Integrated Postsecondary Education Data System. IPEDS does not break out “administrative costs” as a separate variable. Koch calculates the number by compiling data reported for institutional support + academic support + student services expenditures.

“Note that this notion of administration probably does not include many of the expenses associated with faculty research, intercollegiate athletics, medical schools, auxiliaries such as residence halls, etc.” Koch says. “It is a more narrow, tailored version of a university but one that most individuals probably visualize in their minds.”

Koch divides these administrative expenditures by the number of Full Time Equivalent (FTE) students to get expenditures per student, giving twice as much weight to graduate student as undergraduates. He makes that adjustment to reflect the greater costs (space, time, smaller class sizes, etc) associated with graduate education. When calculating the increase in administrative expenditures, he adjusts the numbers for inflation.

Because one of his research interests is the impact of intercollegiate athletics on admissions applications, retention, graduation, and financial gifts, he excluded institutions that don’t have Division I basketball or football programs. That choice eliminated Virginia State University and the University of Virginia-Wise from  his data set. He also excluded the Virginia Military Institute on the grounds “it is simply too different.”

Back to our regularly scheduled programming…

Based on Koch’s data, three Virginia institutions stand out for high administrative overhead — W&M, the University of Virginia, and Norfolk State University. As “public ivies” with strong national reputations capable of charging what the market will bear, UVa and W&M can get away with high overhead. By contrast, one must question whether NSU, which has little pricing power, can afford its cost structure.

Other than those three, VCU carries the highest administrative burden. Particularly worrisome is VCU’s trajectory. All universities have experienced significant increases in administrative costs over the 14 years surveyed, although Longwood University and Virginia Tech are noteworthy for having restrained their increases. VCU stands out for a growth rate administrative expenditures that is positively metastatic.

Affordability and access is the greatest issue facing higher education today. Virginia colleges and universities have papered over the impact on minorities by increasing financial aid — but not enough to fully mitigate the impact of their tuition increases. The white intelligentsia running most of Virginia’s higher-ed institutions have mastered the art of deflection — blaming cutbacks in state aid and decrying racism, even as they have presided over massive spending increases that feather their own nests.

Perhaps African-American students at VCU should worry less about micro-aggressions committed by their fellow students and focus on the real, lasting sources of inequity.