A Tale of Three Virginias

For those who have taken the opportunity to get to know the Old Dominion, one would be well served to drive the Colonial Parkway.

Built by the Rockefeller family in the 1930s, the road is designed in such a way that you could travel the length from Jamestown through Williamsburg and to Yorktown without even so much as noticing the colonial capital.

This is by design, of course. Yet it is also a way of understanding how unique Virginia is among her sister colonies turned states. Whereas New England built townships upon the rocky yet rich black soil, Virginians built farms and plantations upon cheap land, pushing further west when the soil gave out or new opportunities arose.

Townships and cities were the oddities.

For almost 400 years, this concept of Virginia was Virginia. We were an agrarian society of farms and farmlets, ranchers and miners, fishermen and merchants. True, we built a great manufacturing city in Richmond and a great port at Hampton Roads — our own Athens and Piraeus — but much like our Colonial Parkway, these major ports could go unnoticed.

Fast forward to the present day?

Virginians — native Virginians — still have this concept of Virginia that entails our geography. Tidewater, Piedmont, Valley and Blue Ridge were the three parts of Virginia from our old civics textbooks. Cities were along the Fall Line; history dotted the whole; Virginia was the Old Dominion and the Mother of Presidents and we should all aspire to be leaders as they were.

The reality of Virginia today — and even over the last 20 years — has changed dramatically. Want to see the real map of Virginia? 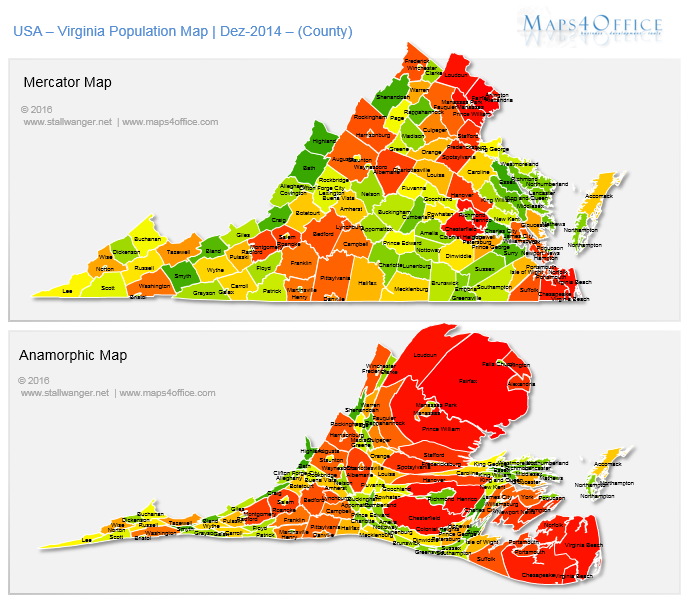 Yet it is much more granular than that. Remember our first graphic?

Feel free to rattle your cane from your front porch with me at this point in time.
One can instantly see the problem for those of us with a more Jeffersonian mindset. The old agrarian idea of Virginia isn’t just being overwhelmed, it is being subsumed by the Hamiltonians in our urban centers. The suburbs aren’t fencing, either. These are people who move towards these gravitational centers for employment purposes and adopt the values of the urban centers.
Want proof? 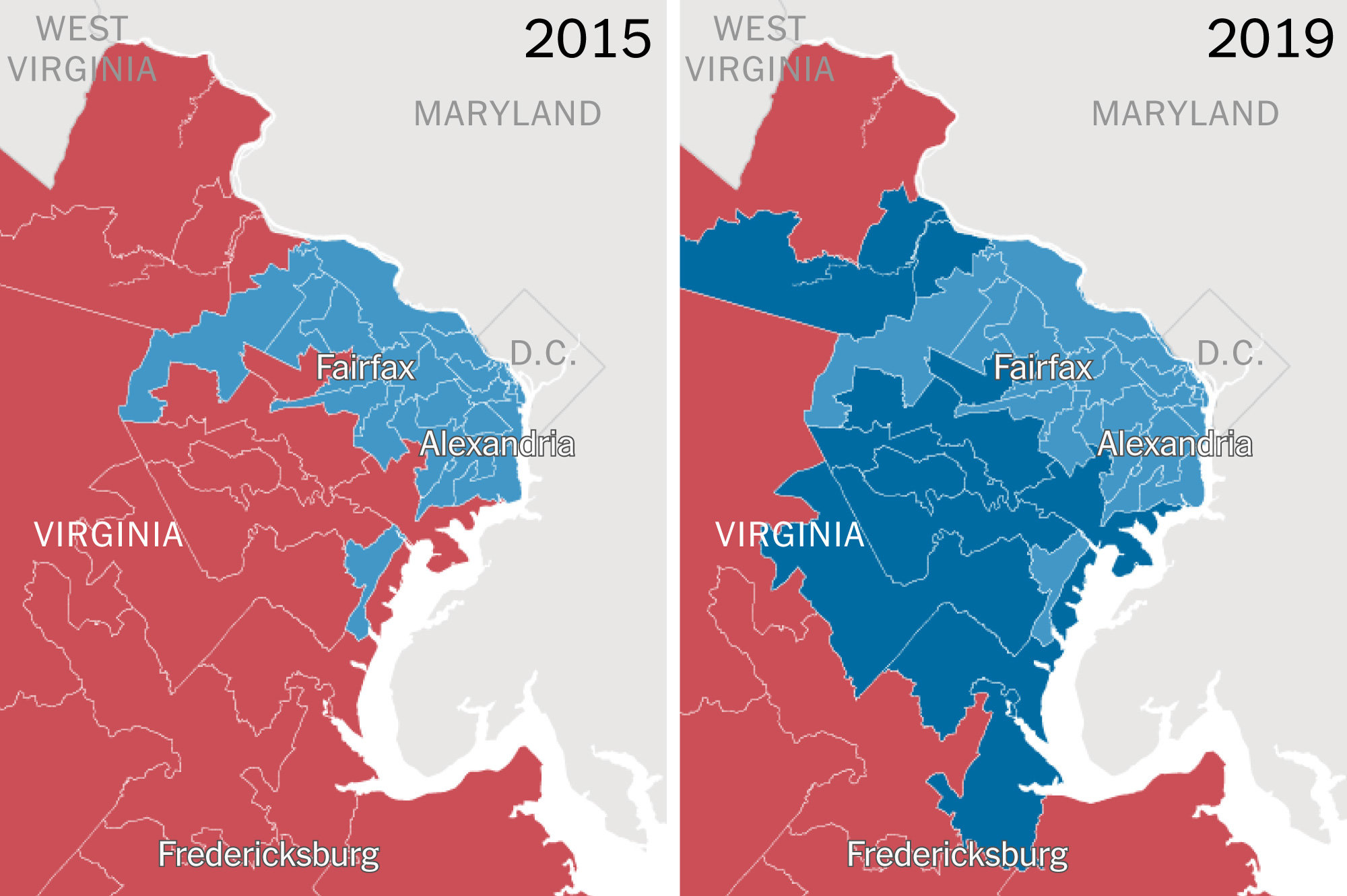 Now some of this admittedly is that Donald Trump changed the map in suburban states such as Virginia and Arizona (and to some degree, North Carolina and Georgia). Those populist values, sharpened in the face of the old Obama-era “coalition of the ascendant” — is there anything more condescending than telling one half of America that their values are obsolete? — simply didn’t play well in the suburbs.

Why? That’s easy enough. Suburban values simply gravitate towards urbane ones. It’s what Jefferson cautioned about when he railed against the corruption of cities. Urban centers standardize citizens to the needs of the polity; suburbs do so in a sub-standard way.

Don’t worry — it gets worse.

Let’s make the problem more stark. The UVA Weldon Cooper Center has some magnificent maps detailing the wider problem of how this isn’t a problem of mere growth, but mass migration from that rural 1/3 to the urban 1/3.

It’s not just that more people are moving to Virginia. Rural localities are hemorrhaging citizens who work, eat, sleep, live, pay taxes, raise children, and hope for the future for other opportunities closer to Northern Virginia.

To make matters slightly worse… What happens when you go to college or university in today’s environment? Send your kids to Caesar; expect good little Romans. Conservative opinions are rarely tolerated while progressive (sic) opinions are praised, lauded, and almost necessary to find employment in the federal or state bureaucracy.

Things get more complicated when one considers how urban living requires different demands than rural living. Utilities are different, schools are different, expectations are higher, quality of life and the difference between a have and a have-not is more stark, languages are different, ethnicities abound, one is forced into contact with ideas and opinions far different than what you’re used to back home…

…and then you move back home. Or into a suburb. City mouse talks to country mouse and the result is nearly predictable.

So, where does this leave Virginia Republicans who are struggling mightily to recapture the General Assembly and win their first statewide race since 2009?

Not only that… We are fighting a bit of a civil war at present between our rural core (to whom Trump was a godsend) and our suburban layer (to whom Trump cost three U.S. House seats and two state majorities in Richmond).

The problem at present is that the Democrats can talk to the suburbs in their own language, precisely because urban needs and suburban needs are still clustered around the centers of economy and power. Rural Virginians are simply backed by a different economy that doesn’t require that same economy or social framework.

Republicans have an opportunity to speak not in terms of strict economy and “the business of Virginia being business” per se, but rather in terms of values.

Let’s all be honest for just a moment. For as much as the media and the business community love to pick on social conservatives, how many Virginians do you really think are on board with any of the following policies:

All of these are actual positions being defended by Virginia Democrats today.

Moral conservatism — not fiscal — is what is going to unite the Republican coalition again. No, this doesn’t mean that we are charging into people’s bedrooms and telling them how to live. But it does mean that coercion in the service of ideology is not merely intolerable, but tyrannical. That live and let live isn’t just a throwaway line, but something we deeply and fundamentally believe you can do here in Virginia better than anywhere else in the world.

Granted, some folks aren’t going to bristle over this prioritization of the moral over the fiscal. I would submit that this is a question of perspective.

Consider for a moment that lawmaking is ultimately an inherently moral process. We ask lawmakers to pass moral laws, reject immoral ones, and routinely ask them to discern between the two. Character and conscience matter in that discernment, and so long as faith informs character, we cannot and will not ask lawmakers to check either their conscience or character at the courthouse or statehouse door.

What the Republican coalition in Virginia needs is a tone shift, away from raw economics and towards the moral optimism of value in society. What do we value in Virginia? Why do we value it?

Is being a Virginian something you get from your granddaddy? Or is it a virtue — an idea — that we pass on to future generations? Is it Jamestown to Williamsburg to Yorktown? Or is it I-95 to I-64 to a container vessel headed to China?

Again, back to this map.

Conservative values are going to lose the fight in those dark green areas. The entire infrastructure and apparatus of the urban centers are not just against us, but for the moment diametrically opposed to everything we believe.

For lack of alternatives, the suburbs are choosing economy over values, precisely because the media has caged anything conservative as racism, bigotry, hate and so forth. See the play clearly now?

The Democrats don’t have any of this and they know it.

If the grand contest here is between three Virginias, the battleground is in the suburbs. Which narrative will endure? The failed narrative of economic leftism and wealth creation centered around urban vices? Or the more hopeful and enduring narrative of moral conservatism as the reason we build economies in the first place?

This entry was posted in Culture wars, Demographics, Politics and tagged Shaun Kenney. Bookmark the permalink.