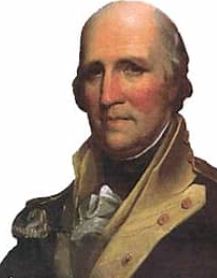 I reproduce here a letter from state Sen. Chap Petersen, D-Fairfax, who attended the University of Virginia and lived across West Main Street from the statue of George Rogers Clark. He addressed the letter to UVa President Jim Ryan and the Board of Visitors. — JAB

I want to write, firstly, to acknowledge and express my appreciation at the University’s decision to conduct its Commencement activities in-person and without any undue restrictions. As a parent of a graduating student, it made a difference.

Secondly, I want to register my disappointment at the decision to remove the George Rogers Clark statue from its traditional location on West Main Street and presumably place it somewhere so it will never be seen again. What a mistake.

Although little known today, George Rogers Clark was an enormous figure in the early history of the United States. During the Revolutionary War, the British crown controlled the territory west of the Appalachian Mountains and waged war against their former colonists through the services of local tribes, primarily Shawnee. During that time, the British General Henry Hamilton (a.k.a. “the Hair Buyer”) paid a bounty for the scalps of American settlers, including women and children, who lived alone on the frontier and were largely defenseless.

In response, Clark organized a small force of Virginians to cross the mountains and invade “the Northwest” via the Ohio River, which eventually carried him to the Mississippi River. Assisted by native guides, Clark’s band laid siege and then captured Hamilton at Vincennes, after traveling hundreds of miles through back country in the middle of winter. It remains one of the most audacious campaigns in American history.

Clark’s 1778 campaign and his ability to hold the remote region against British counter-attacks led directly to that area becoming part of the United States at the Treaty of Paris. Eventually, Congress would create five states (Ohio, Indiana, Illinois, Michigan and Wisconsin) out of the Northwest Territory, all of which became free states. It is fair to say that without Clark’s efforts there would have been no migration to the West, no Louisiana Compromise, and, certainly, no Big Ten football conference.

It is a fair critique to say that Clark was invading tribal lands by attacking Ohio, although those same tribes recognized the suzerainty of the British crown and were seeking the destruction of the United States. More importantly, the intentional diminution of Clark’s efforts because of his skin color shows an astonishing lack of perspective, as well as the “bias” that this Board claims to oppose. It also ignores history.

The conquering of the American continent was a violent and brutal undertaking. Aggression and atrocity were omnipresent, particularly against the American Indians. But it was also a historical reality that created a nation which is (and remains) a unique experiment in the history of man. Assuming that the United States could have been created without warfare and violence is an act of intellectual malpractice.

There is no need to “apologize” for the actions of George Rogers Clark or “contextualize” them. With a handful of men, he conquered the Northwest and made it part of the United States, thus assuring our national would become more than just an East Coast enclave. That is an achievement that none of us can comprehend, much less duplicate.

In closing, I note that the $400,000 being used to “remove” the statue could be far more beneficially allocated to award scholarships to native Americans, some of whom still live in dire circumstances. That would actually help someone, as opposed to an academic “dialogue” with a predictable anti-American bias. To that end, I am copying my client Eunice Davidson, Spirit Lake Sioux member and current President of the Native American Guardians Association, if you all choose to pursue that direction.

This entry was posted in Culture wars, Education (higher ed) and tagged University of Virginia. Bookmark the permalink.