An Ignominious Footnote to Bacon-Related History 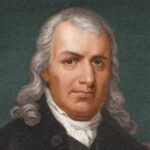 One of America’s founding fathers is finally getting his due: Old Bacon Face. That was the moniker bestowed upon Samuel Chase — an Annapolis, Md. lawyer, signer of the Declaration of Independence, and member of the U.S. Supreme Court — whose mug had a reddish-brown complexion. The House of Representatives voted to impeach Chase in 1805 for his outrageously partisan behavior on the bench, but the Senate could not muster two-thirds majorities to convict him.

This entry was posted in Bacon and pigs. Bookmark the permalink.