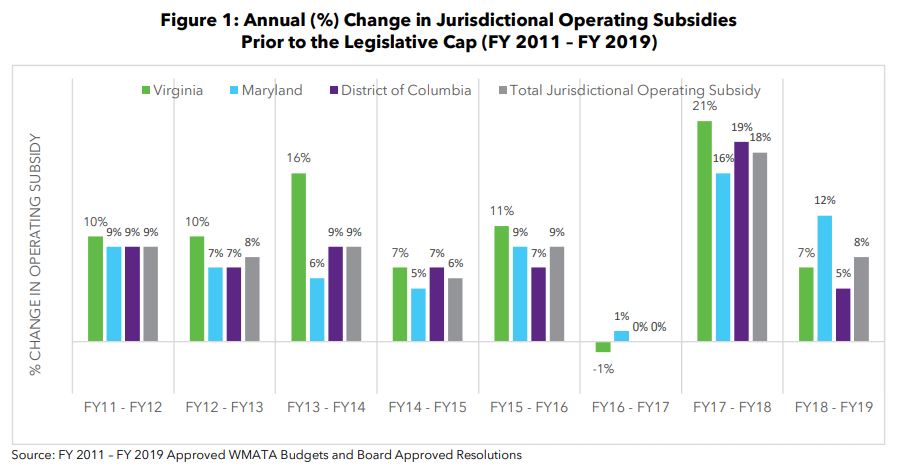 A 3% cap on annual state contributions to the Washington Metropolitan Area Transit Authority (WMATA) “appears to be a useful tool” for managing runaway subsidies for the Washington-area transit agency, finds a report recently published by the Northern Virginia Transportation Commission (NVTC).

The main benefit cited by the report, required by state law, has been to restrain increases in wages and salary levels, which constitute 70% of WMATA’s budget. States the report: “Data presented to the Working Group found the annual wage increases for union employees range from 0% to 4% per year in the multi-year CBAs over FY 2009 – FY 2024, demonstrating that the cap appears to be a helpful tool in WMATA’s negotiations with labor.”

Otherwise the “Report on Virginia’s 3% Cap” is a curious document.
While it provides the graph (replicated above) showing year-over-year increases in operating subsidies since fiscal 2010-11, it does not reveal the absolute dollar amount of increases, either before or since the cap. Are we talking about $20 million a year in state subsidies? $200 million a year? Half a billion dollars? More? Less?  Some sense of proportion would be helpful.

The report doesn’t even reveal how much the subsidies have increased since the caps were put into place? Did the bail-out funding increase by the full 3% each year? What was the dollar amount?

How could a report not include such information? The fact that such basic data is missing makes me wonder if there is a hidden agenda. What are the authors trying to downplay, and why?