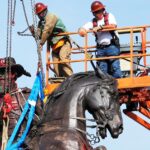 A special prosecutor charged with investigating a $1.8 million contract to take down Confederate statues in the City of Richmond, is asking Attorney General mark Herring to authorize the Virginia State Police to help him.

“I hereby request that you authorize the Bureau of Criminal Investigation within the Virginia State Police to conduct an investigation into this matter,” wrote Timothy Martin, commonwealth’s attorney for August County, to handle the matter.

According to the Associated Press, Martin told Jeffrey Breit, an attorney for Richmond Mayor Levar Stoney, he needs additional investigators to conduct interviews.

During a period of civil unrest early this summer, Stoney bypassed state and local emergency-procurement regulations to give a $1.8 million contract to a shell company owned by Devon Henry, founder of Team Henry Enterprises, a minority contracting firm. The deal has been criticized not only for failing to comply with the minimal emergency regulations but on the grounds that the charge was excessive and that Henry had contributed money to Stoney’s electoral campaign in the past. Stoney, Henry and others have argued that the high price tag was justified by security considerations during a state of emergency, even though the contract provided that Richmond City Police would provide security for the out-of-state rigging crew that did the job. Henry’s group removed all the Confederate statues on Monument Avenue with the exception of the Lee Statue, which is under litigation.

Bacon’s bottom line: This will be an interesting test for Herring, who is fighting for the removal of the Lee Statue on Richmond’s Monument Avenue. Will he approve providing state police resources to aid the investigation into Stoney, who is on the same side of the Confederate statue controversy as he is? Or will he squelch any assistance — perhaps on the grounds that the investigation is politically motivated?

This entry was posted in Public corruption, Scandals, Uncategorized and tagged James A. Bacon. Bookmark the permalink.