With Chase Vs. Cox, The Field Looks Complete 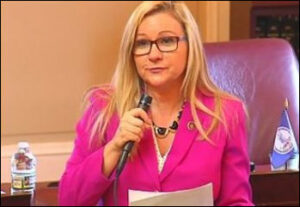 Give credit  where it is due: Chesterfield Senator Amanda Chase, R-Chesterfield, had the wisdom and courage to reverse a bad decision. Virginia’s Republicans may be back in the game for 2021.

Both Senator Chase and Delegate Kirk Cox had expressed a preference for their party to choose a nominee for governor by holding a June primary, likely to draw several hundred thousand voters to make the choice. A week ago, party insiders in a smoke-filled Zoom chat made the bonehead decision to hold a convention, where fewer than 1 percent of those likely primary voters might participate.

The other 99.5 percent of the Virginians who probably would have liked to pick a GOP nominee – but not spend their money and time on a convention — were just told: You don’t matter, we don’t care what you think, those of us who live and breathe the insider game want to pick. But we sure hope you show up in November and help us then. Brilliant.

Chase’s immediate reaction was to announce she would simply gather petitions and get on the November ballot as an independent, although you could expect her to claim the title “independent Republican.” She saw and grabbed the high ground, claiming (correctly) that the GOP was once again behaving as insular, out of touch and disinterested in broadening its appeal.

The decision sparked a war within the GOP, with primary advocates even attacking State Central Committee members. Somehow, however, Chase realized that was not a path to victory for her, and in fact guaranteed the Governor’s Mansion to the Democrats. Who wants to be another Russ Potts? So now she is back in the hunt for convention delegates.

Frankly, she has a solid chance to be the nominee in a convention process. She has claimed and will not lightly surrender the Trump mantle. She will have problems in November if she is atop the ticket, but she will run far better as the GOP nominee than as a third name at the end of the ballot.

Cox had a different response to the decision by the State Central Committee. He shrugged his shoulders and said he’d deal with it, then set about to rope in the endorsement of one of the possible convention rivals, former Senator William Carrico, Jr. of Grayson County.

Even better, he coupled the announcement with taking a position on an issue that appeals to a potential political base that can deliver for him both in a convention process and in November: Law enforcement and their families and supporters. Those folks might have been inclined to support Carrico, a former State Police officer.

Cox, the former Speaker and still senior Republican on the House Appropriations Committee, endorsed a $50 million plan to improve pay for state and local law enforcement. An October 2019 proposal for the Virginia State Police has not drawn the support of Governor Ralph Northam, who gets the first and last word on the state budget, so now Cox is their champion.

It also puts individual Democratic legislators in a quandary. They now have to wrestle with the fact that many in their base, right here in the Commonwealth, want local and state police to face reduced funding along with reduced authority and weakened liability protections. The bills have been introduced and in some cases the roll calls recorded, although some of the most radical proposals fell short.

Being on the wrong side of law enforcement almost cost Democrats the U.S. House of Representatives and may yet keep the U.S. Senate in Republican control. It is probably too late for Virginia Democrats to repair the damage, so they can only hope that something else is front-of-mind in October and November. It will remain a potent issue, now Cox’s issue.

The convention process requires less money than a primary would, with its major advertising costs, but it better tests a candidate’s organizational abilities. It also emphasizes the one political commodity that you cannot buy: Time. The key decisions will now be made in more than 100 different locations in March and April, not at the polls in June. Those candidates not yet building a statewide network and staff to gather delegates are now hopelessly behind.

This is why those previously-mentioned party insiders love this convention process – they actually play a key role in recruiting friends and neighbors to become delegates and then coming to meetings. Any Northern Virginia business executive, or even a senior and well-respected senior legislator, still on the sidelines cannot compete without a statewide network at the grassroots.

Twenty-eight years ago, a Northern Virginia business executive named Earle Williams made an outsider run for a convention nomination. By the end of 1992 he’d been at it more than six months. The staff were well into developing a major set of policy positions and were deep into building local organizations to compete with George Allen and Clint Miller for convention delegates. Despite Earle’s wealth and the year-long effort, Allen won the 1993 nomination, delivered by the activists.

Those who are now still considering a late entry to a GOP convention process have simply run out of time.

41 responses to “With Chase Vs. Cox, The Field Looks Complete”