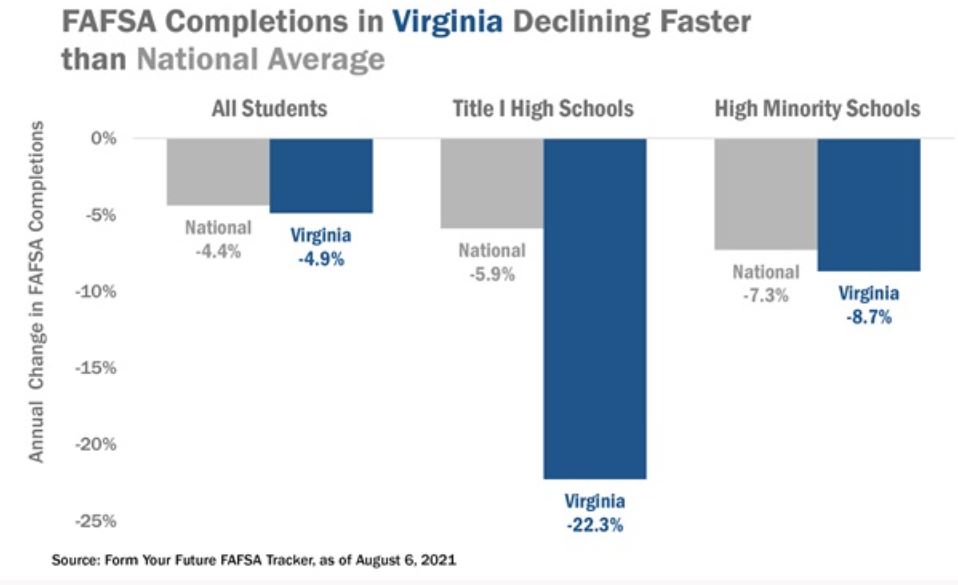 Tom Allison, a staff analyst with the State Council of Higher Education for Virginia (SCHEV) has uncovered quite the conundrum. How does the Commonwealth reverse the plummeting rate at which low-income students are completing the Free Application for Federal Student Assistance (FAFSA) form?  The free-fall in applications, which are necessary to qualify for federal financial aid to attend college, could presage a decline in actual college attendance.

Nationally, FAFSA completions are down 4.4% from this time last year. Virginia under-performed the nation, with completions down 4.9%, writes Allison in a new SCHEV publication, Insights, which draws upon SCHEV’s in-depth data collection to inform policy making.

What really concerns Allison is the fact that at Title 1 schools (schools with high concentrations of low-income students) in Virginia FAFSA completion is down 22.3% — three times the national average for Title 1 schools.

“Virginia’s low-income students already enroll in college at lower rates, and these data indicate they are likely to fall further behind,” he writes.

The finding of declining FAFSA applications follows on the heels of news that Standards of Learning (SOL) pass rates fell sharply in the 2020-21 school year. Although all socioeconomic and racial groups performed poorly, the fall-off was sharpest among African-Americans.

The combination of falling SOL pass rates and declining interest in attending college is shaping up to be an educational catastrophe for Virginia’s African Americans.

College enrollment in Virginia eroded during the COVID-19 epidemic. It was mostly flat in the four-year colleges but tumbled 5% in the community colleges. If the collapse in FAFSA applications are any indication, the community colleges are in for another tough year — even though Governor Ralph Northam’s “Get Skilled, Get a Job, Give Back” initiative will make $36 million available this year to cover tuition, fees, books and wrap-around support for community college students.

The Northam administration’s response has been to mobilize the bureaucracy to address the FAFSA issue. A staff position has been created to improve coordination and communication between SCHEV and the Virginia Department of Education, including developing “shared definitions and accountability metrics.” SCHEV and VDOE also formed a partnership with the Virginia College Access Network to improve FAFSA completion rates. As on-site events were canceled due to COVID-19, the partners launched a “virtual one-on-one pilot platform that connected families and students with 50 trained college counselors.” The pilot program served 250 families.

The underlying assumption of Team Northam’s response is that the cause of the plummeting FAFSA completions was the COVID-related shutdowns of schools serving lower-income students. Perhaps that is a valid assumption. I would be surprised if there was not some truth to it. But I think it’s always worthwhile to subject such assumptions to critical scrutiny. So, let me play devil’s advocate.

The decline in FAFSA completions coincides with the disastrous fall in SOL pass rates. Is that a coincidence? Or do both phenomena stem from a common cause? What might that common cause be?

Let me think….. Oh, yes, Diversity, Equity & Inclusion (DE&I) initiatives made unprecedented inroads in Virginia schools last year. You can give these initiatives any label you want — Critical Race Theory, whatever — but what’s important are not the labels but the underlying assumption that the education system is racist, designed by whites for whites. Whites are oppressors, blacks are oppressed. “White” attitudes toward education, and “whiteness” in general, are part of the problem. Blacks need teachers who “look like them” in order to learn, and they need “culturally sensitive” pedagogy.

According to this body of thought, African Americans are hapless victims of remorseless racism. They have no agency. The onus is on White people to change and for the educational system to change. What is the psychological impact of Critical Race Theory (or whatever you want to call it) on students? A logical response for Black kids — low-income Black kids especially — would be to think, “What’s the point? The system is racist. The deck is stacked against me. What’s the point in studying hard? What’s the point in going to college?” Such views are likely to be reinforced by current notions that academic achievement is associated with “whiteness.”

I don’t know for a fact that African-American kids are thinking this way. But I think it’s a reasonable hypothesis that warrants exploration. If my conjecture is right, the VDOE/SCHEV solution of fine-tuning the bureaucratic response in order to complete more FAFSA applications will yield negligible results. If I’m right, the problem runs much deeper, and the rage for DE&I is likely making things worse.

This entry was posted in Education (K-12), Race and race relations, Uncategorized and tagged COVID-19, James A. Bacon. Bookmark the permalink.