A very bad week. One can only assume that Virginia’s Democratic Party is very happy to see this week draw to a close. The Democratic Governor, Lieutenant Governor and Attorney General are facing deep scrutiny over revelations that came to light this week. While the specifics of each scandal remain hazy the sudden evaporation of moral outrage from fellow Democrats is crystal clear.

Northam: the expendable man. Govenor Ralph Northam was the first to fall under a thick cloud of disrepute as pictures from his personal page in his med school yearbook surfaced with people dressed in blackface and Klan outfits.  Democrats moved quickly to condemn Northam and call for his resignation.  Senators Tim Kaine and Mark Warner were joined by the Virginia Black Caucus, former Governor McAuliffe, national Democrats and (most interestingly) Attorney General Mark Herring in calling for Northam’s resignation. Appearing in blackface is intolerable they all wailed in unison. Blue Virginia touted the calls for Northam’s resignation as proof of the ” … VAST moral difference between Virginia Democrats and Republicans …”

At the time the column was written they had a point. That would change.  The Dems were actually offering “the sleeves from their vest” with their calls for Northam’s resignation. Northam is a 59-year-old, straight white man who can’t run for a second term in 2021. He has no political future. His replacement would be Justin Fairfax, a 39-year-old, African-American rising star of the Democratic Party’s liberal wing. See ‘ya Ralphie!

Farifax Channels Bill Clinton. The second shoe to drop was an incendiary allegation of forcible rape against Democratic Lieutenant Governor Justin Fairfax. While some Dems called for Fairfax to step down most did not. Apparently, the Democratic Party’s mantra of “Believe Women” actually translates into “Believe Women, unless it’s politically inexpedient.” In fairness, Northam admitted to appearing in blackface (after a world class bumblefest) while Fairfax vigorously denies the allegations against him. LG Fairfax is swimming in a different pond than Northam and (as we’ll see …) Herring. Fairfax is accused of a very serious felony which is still within the statute of limitations in Massachusetts. Our LG would be well advised to remember that he is named Fairfax not Kennedy. One assumes that even the Libtopia of Massachusetts will investigate this charge of rape regardless of Fairfax’s status as a rising Democratic Party star.

Herring illustrates the two faced reality of the Democratic Party. The third fiasco to befall Virginia Democrats this week was Attorney General Mark Herring’s admission that he, too, had appeared in blackface while in college. One would assume that Herring would immediately follow up his confession with his resignation. After all, he had demanded Northam’s resignation for admitting to appearing in blackface. Of course ,Herring did not resign. If one thing has become clear it’s that Mark Herring is a serial dissembler who can’t be expected to do what he says he’ll do. 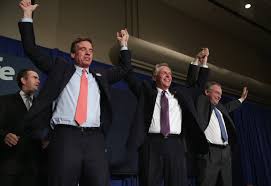 “Mark, move to your right. They can still see the guy we’re going to throw under the bus.”

What a difference a week makes.