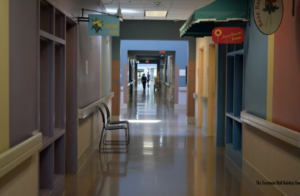 Supply cannot begin to keep up with demand.

In this case, the consequences involve personal welfare and public safety. And they can be terrible in both cases.

Governor Youngkin will propose to the 2023 General Assembly additional funding and policy prescriptions for the state’s mental health system.

I say “offer,” because much of what policy prescribes has proven difficult to fill in practice.

Virginia’s mental health system is in deep trouble because of shortages of personnel and facilities to absorb the very steep rates of increases in persons needing assistance.

The personnel problems are twofold and affect both government and private services.

Medicaid programs offer services that private facilities and practitioners, facing the same labor shortages, have proven in some combination unable or unwilling to provide at Medicaid reimbursement rates. State-contracted Medicaid Managed Care Organizations (MMCOs) have not solved those problems.

So part of the answer is money, but we really don’t know how much. And in this case, money alone may not provide sufficient services to satisfy demand.

What follows is a summary of the issues.

Detention orders.  Code of Virginia § 37.2-809. Involuntary temporary detention; issuance and execution of order is constantly being modified.  Since 2004, it has been changed by 11 different General Assemblies.

The 2008 General Assembly re-wrote the statute almost entirely, substituting “shall” for “may’ issue and providing broad new sources of evidence that can be considered in the issuance of a temporary detention order (TDO).

The changes worked.  TDOs have more than quadrupled since 2014.  Building places to detain and providing medical specialists to treat such subjects has proven more difficult than changing that law.

Psychiatric hospitals. Residential facilities are in the worst shape.

In addition to physicians, nurses and other specialists, they are short of the minimum-wage workers who make up the bulk of the work forces. Those are the same workers needed by every small business and most large ones, and inpatient mental health work is hard and dangerous. Supply does not meet demand.

During the height of the pandemic, Commissioner of the Department of Behavioral Health and Development Alison Land told the General Assembly that

“low pay, burnout and growing workloads are pushing employees out of the field. In many cases, the shortages leave available staff scrambling to respond to a high-need patient population. Assaults and injuries within facilities are common, Land said — a difficult cycle that leads to more turnover.”

She went on to say that inpatient facilities across the state were operating at roughly 65 to 70 percent of staffing, with occupancy at or exceeding limits.

In mid-2021, more than half of Virginia’s state mental hospitals were closed temporarily to new admissions because of overcrowding.

Private providers have the same problems, exposed by increases in Medicaid-funded services that in some areas of the state have found few takers among services providers.

The state asked general hospitals to accept more patients in mental health crisis. The response from the Virginia Hospital and Healthcare Association was that general hospitals would do everything they could, but they had the same space and staffing issues as psychiatric hospitals.

Hospital Quality. The best source for reliable quality information about the nine Virginia psychiatric hospitals listed in Medicare Compare is to click on the hospital name.

Using Dominion Hospital in Falls Church as an example, page down and click on “Psychiatric Services.”  You will see that Dominion get’s terrific grades for every quality measure; the nearby Northern Virginia Mental Health Institute, not nearly as good.

Petersburg’s Poplar Springs Hospital has a lot of work to do across the board. Western State has serious patient safety deficiencies.

For general hospitals with a psychiatric unit, you can do the same.  Use Augusta Health as an example.

So the Medicare Compare list is worth a look.

Staff shortages – the Eastern State example.  Eastern State Hospital in Williamsburg, the state’s largest, is seeking workers for 44 job descriptions, for most of which they seek multiple workers.

Included among the jobs is one for a pharmacy courier, for whom the minimum qualifications are a high school diploma, a drivers license and a background check.  It is a full-time salaried position offering a $7,500 sign-on bonus to those new to state employment with a one-year written agreement.

Community-based government services. The state has attempted since 2017 to move mental health care into the communities with increased funding to the 40 community services boards (CSBs).

In 2019, Governor Northam announced that goal had been achieved.  The program provided triage. After initial assessment, the goal was to get those who needed it care by appointment within 10 days.

Crisis services at the CSB’s aspire to include a team of clinicians available to provide 24-hour crisis response to individuals experiencing a mental health or substance use crisis. They provide crisis intervention assessment, counseling, and referral. They are responsible for pre-admission screening for hospitalization and court liaison services for individuals subject to involuntary commitment procedures.

Crisis intervention teams include law enforcement, behavioral health and persons with experience with close family with mental illness. CIT training is a 40-hour curriculum taught by specialists from those communities.

CSBs typically also provide a Crisis Intervention Team Assessment Center (CITAC) that provides a secure location for those experiencing a behavioral health crisis. Critically, CITAC relieves the burden from law enforcement for maintaining custody of persons exhibiting mental illness of sufficient severity that they are under TDOs.

A Crisis Center provides a safe and less restrictive environment for those in crisis.

In practice, CSBs struggle with the same resource shortages as the rest of the system. In some, full services described above are policy, but remain aspirational in practice.

Medicaid. In July of 2021, Virginia Medicaid, by far the biggest insurer providing mental health services in the Commonwealth, began offering to fund:

In December of 2021, immediately before the Youngkin administration took office, six more Medicaid-funded services were offered.

Contractually, the MMCOs must provide those nine services to their patient populations, but sufficient supply is just not there in many parts of the state.  And, yes, they do what they can with telemedicine.

In short, the Commonwealth cannot provide the state services that are mandated by law, and offers to pay through Medicaid for more services than are available in the private sector.

Even the funding currently provided is boosted temporarily by federal COVID money.

The first thing that any government properly would do in this situation is triage its programs because of the overarching staffing shortages which money alone may not fix. Which are the most vital?  Where are the biggest needs?

Virginia is ranked 14th overall in 2023 in Mental Health America’s ranking of states for lower prevalence of mental illness and higher rates of access to care for adults.

It is, on the other hand, ranked 48th among states for the same measures for youth.

The whole data table is here.

The Department of Medical Assistance Services has floated the idea of having MMCO’s screen demand, but that is getting pushback as not sufficiently timely.

The political problem is that any reduction in services driven by qualified labor supply shortages, not just the price of those services, will be called “cuts” by the political opposition. Throwing-Granny-out-in-the-snow kinds of ads.

Even though many services officially “offered” are not available in practice now in many areas of the state.

Because, in the current market, skilled labor goes where it wants to go, not necessarily where it is needed, some services available in wealthier districts may not be in poorer ones regardless of funding.

But to govern is to choose.

Governor Youngkin will have his administration’s estimates of what can be done with the money available, and how much money that is. And how much cannot be done.

It is that problem set that the Governor has set out, along with the General Assembly, to help Virginians address.

Updated Nov. 29 at 8:37 adding a section on detention orders.