Virginia’s coastal region is getting creamed by relative sea level rise, not the absolute variety. As clear and important as that is, however, Virginia officialdom has decided to ignore it and instead base its economic decisions on scary model projections that put much of tidal Virginia underwater within decades.

This June article from Virginia Mercury details how Governor Ralph Northam’s administration imposed the assumption that relative sea level at Sewell’s Point will rise 2.2 feet by 2050, which would require an acceleration of the measured rise by factors of about five. The projected rise would approach seven feet by 2100. That would cover much of developed Virginia Beach.

As noted yesterday, when evaluating the Climate Armageddon Narrative, one of the key steps is to ask what facts are not being mentioned because they might undermine favored conclusions. On the issue of relative sea level, a recent state report with quite an alarmist tone overall at least honestly admits what is really going on.

Most news stories on projected future relative sea levels on Virginia’s coast ignore the inconvenient fact that much of our coastal region is sinking. Virginia Mercury ignored it in this story and made only passing mention in that June report. Why? Perhaps because the sinking land cannot be blamed on carbon dioxide emissions from power plants or Toyotas.

The relative sea level rise at Sewells Point (see opening illustration) is 4.73 millimeters per year, give or take about a quarter of a millimeter, and it has shown that rate of rise for 90 years of records. NOAA puts absolute sea level rise at about 1.7 mm per year, give or take, (about the width of a nickel), meaning about two-thirds of the change at Sewells Point is not the rising ocean. It is the sinking land.

A 2007 study on the readings at Gloucester Point (immediately below) concluded two thirds of the 3.81 mm per year relative sea level rise was due to the sinking land. The table at the end of this post illustrates other examples in and around Virginia.

If your street in Norfolk is the one flooding, the distinction between absolute and relative won’t matter. If you are investing billions of dollars based on overblown fears about worldwide sea level rise, you might want to start with the actual data. The historical trend line for Sewells Point does add about 16 inches of relative sea level by 2100, and that will indeed be a problem for the low-lying areas.

If the absolute sea level rise in the North Atlantic stays about 2 millimeters per year, it would take 150 years to see a one-foot rise (305 mm). To reach even the 2.2-foot increase (670 mm) the state officially expects by 2050, the rates of rise at Sewells Point would have to be four to five times the observed rate. On what do they base that dire projection? Models.

All of the projections of more rapid change are based on models that purport to account for the expansion of warming waters and outflow from melting ice and glaciers, with the added assumption of accelerating trends rather than steady change.

The dependence on climate models is the problem with today’s climate science. The more skeptical of climate scientists and journalists have been pointing out that the models are “running hot” – exaggerating future risks — for years. Finally, in a July 2021 interview with the journal SCIENCE, Gavin Schmidt, director of NASA’s Goddard Institute for Space Studies in New York and Acting Senior Climate Advisor for NASA, has been forced by reality to admit:

Already scientific papers are appearing using CMIP’s (the models when combined) unconstrained worst-case scenarios for 2100, adding fire to what are already well-justified fears. But that practice needs to change, Schmidt says. ‘You end up with numbers for even the near-term that are insanely scary—and wrong.”

Again, this is not an argument that Virginia can relax. Our coast is showing high relative sea level rise in places. Our storm water and other urban infrastructure is already being swamped from time to time by the existing storms and that steady (if slow) relative rise of our oceans. None of this, however, is due to accelerating climate trends and it does not support the Climate Armageddon Narrative.

Kip Hansen is an experienced analyst and writer on issues of climate and human-caused climate change. Found as I was seeking a volunteer consultant to help with my response, he added several points to my argument and prepared several illustrations. He deserved more than a “hat tip.” 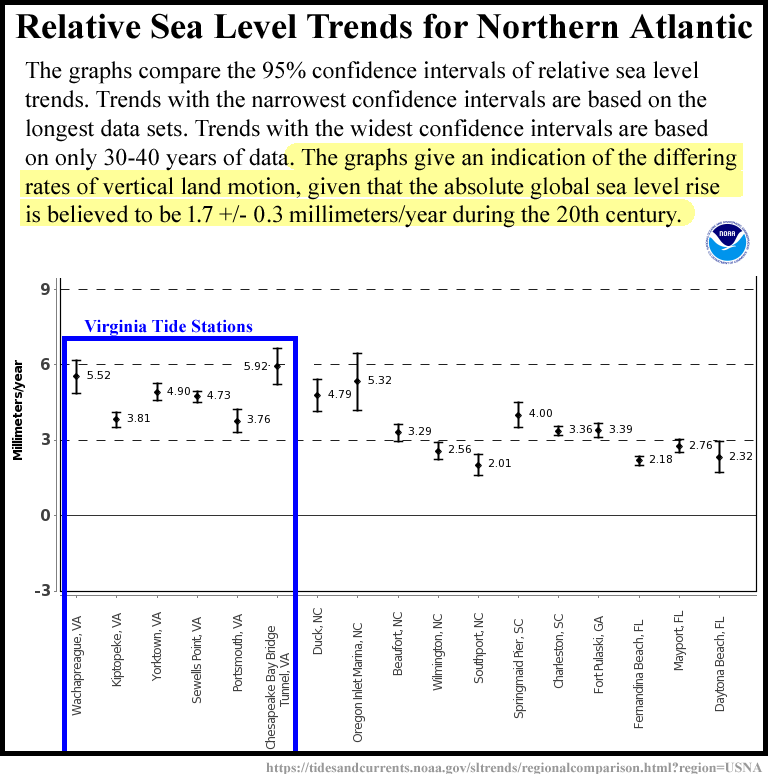