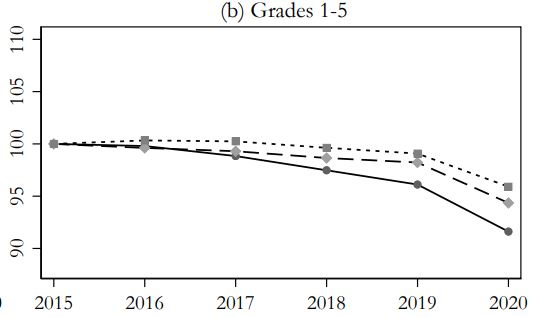 National enrollment in public schools across the country fell by 2% nationally — by 1.1 million students — in the 2020-21 school year as school districts and parents grappled with how to respond to the COVID-19 epidemic, finds a new study published by the National Bureau of Economic Research (NBER).

The decline was concentrated in the early grades. Kindergarten enrollment plummeted by 9%, concluded the study, “The Revealed Preferences for School Reopening: Evidence from Public-School Disenrollment,” by Thomas Dee and three co-authors, all with Stanford University.

“These results suggest that significant numbers of parents, particularly parents of younger children, did not want their children to participate in remote instruction,” write Dee et al.

In making the calculations, the authors adjusted for the fact that enrollment in some grades had be declining before the epidemic due to shrinking cohorts of school-age children.

Disenrollment due to remote-only instruction was greater in rural, Hispanic, and Black communities, the authors noted, although they provided no data on the degree to which those groups were impacted.

The COVID school shutdowns created a historically unprecedented disruption to learning, the authors said. It will be difficult to gauge the full impact, as many standardized tests were canceled, and when exams were held, participation varied. Still, the bulk of the evidence suggests that children lost the equivalent of several months of learning, with the most acute losses in math. Likewise, the social isolation caused by remote-only learning aggravated stress, mental health issues, and lower levels of engagement as reflected in chronic absenteeism.

The authors, who are economists, say that disenrollment trends lend insight into the “revealed preferences” of parents — how they voted with their feet, so to speak, as they weighed the tradeoffs of public schooling, private schooling, home schooling, and delaying schooling.

Bacon’s bottom line: Virginia schools are resuming in-school classes this year, but controversies still rage over vaccination and masking policies. The Virginia Department of Education (VDOE) and many local school districts have introduced a new bone of contention — teacher and staff training, which could trickle down to classrooms, of controversial race theories that many parents perceive as left-wing indoctrination.

Virginia public school enrollment numbers should be published by Sept. 30.