Strategies for Growing the Rural Population 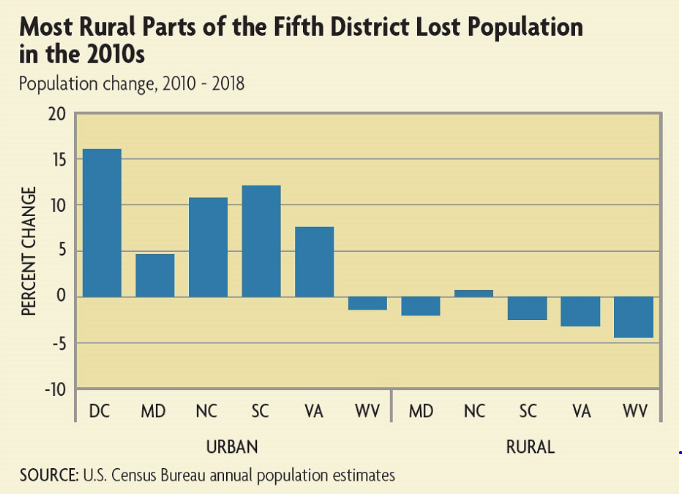 In a recent article, the Federal Reserve Bank of Richmond highlighted strategies for bolstering the population of rural counties in the Fifth Federal Reserve District. Some ideas will prove familiar to readers of Bacon’s Rebellion, such as identifying amenities that will attract retirees and second-home buyers. But the article makes some suggestions we haven’t heard before.

Population growth, or at least population stability, is critical for the economic health of Virginia’s rural counties. A shrinking workforce makes it more difficult to attract outside employers, a shriveling population makes it harder to support health services and retail amenities, and a declining tax base undermines the ability to pay for government functions. Population stagnation and/or decline is a problem across the five states of the 5th district, and Virginia is no exception. (Virginia’s rural counties actually saw a small net in-migration, but that was more than offset by “natural” decrease of deaths exceeding births.)

To my mind, the most fascinating strategy is focusing on people’s personal ties to family, friends and communities. One study used 300 interviews in 21 towns at rural high school reunions to learn why some attended decided to return to the rural community where they grew up.

Most returnees cited family reasons for returning home. Most were too young to need to care for aging parents, but many returnees decided to move back after becoming parents. Another commonly cited family factor among returnees was the desire to help their parents run a family business. That being said, many people who returned had to accept lower wages and dual-earner couples had trouble finding job matches.

Communities seeking to reverse the rural brain drain should focus on bringing home young people who already have sentimental ties to the area. High school reunions may be the most efficient vehicle for tracking down and identifying prospects. (Some entrepreneur stands to create a nice business by identifying a cost-effective way to tap that resource.)

Another strategy is to attract retirees — an approach that I have touted on this blog. The article emphasizes that two criteria are important. It helps to have scenic amenities and, a fact to which I have given insufficient attention, health care services. Retirees are older, which means they have more chronic health issues. They need convenient access to docs and hospitals. If rural communities want to attract retirees, they need to upgrade their healthcare services.

What if a rural county isn’t particularly scenic? The Fed article cites a study that finds that increases in public school quality increase the number of new residents moving in. Similarly, a better linkage between high school students with vocational training would help compensate for the loss of college-bound rural youth.

There are signs that the population loss in rural America has abated. “The rural population decline that started in 2010 eventually turned around and ended with an increase of 33,000 people between 2016 and 2017, driven by a slight increase in migration from urban to rural communities,” the article notes. But that revival has been uneven; some localities still stand to lose population.

It will be interesting to see if the COVID-19 epidemic engenders a back-to-the-country movement. Many Americans may be looking for an alternative to elevators, mass transit, and densely packed apartments. While some people may flee the big city, that doesn’t mean they are ready to move to a small town lacking urban amenities. Smaller metros may be the biggest beneficiaries. Still, the strategies reviewed in the Fed article make it clear that leaders of rural communities need not sit back and wait passively. There are many things they can and should do to spark a rural revival.

This entry was posted in Economic development and tagged James A. Bacon, Rural development. Bookmark the permalink.