That Fox News poll release last night created some noise. No sooner had that hit the airwaves than the phone started blowing up from around the country and Commonwealth. Glenn Youngkin was +8 (53-45).

What do you think? Is this real?

Naturally, Republicans were thrilled and Democrats dismissive. It is Fox News. The reactions would have been reversed were it a poll from MSNBC.

Today, the Washington Post/GMU Schar School Poll released their poll (McAuliffe +1 49-48) and it will likely receive the same partisan response. Republicans will dismiss it and Democrats will hail it.

Republicans will say it’s the Post AND Dwight Schar, for whom the school is named, supports Terry McAuliffe. Given the Fox Poll showing Glenn Youngkin +8, anything closer to a tie will be a response ray of relief for Democrats and another “See I Told You So” (SITYS) moment for the Republicans.

Rinse and repeat. Binary politics at its best.

But it’s gotten so bad this year for Republicans in Virginia that Democrats are complaining to me about how partisan the coverage is.

To which I reply :

How do Republicans deal with it?

First, Republicans pretty much roll their eyes – “Here we go again.” Second, they dismiss most things in the mainstream media other than yesterday’s sports scores, market reports, and weather events. Third, they use alternative methods of communicating with their voters. Fourth – this is the sad part – they dismiss almost everything that could be associated with being constructive criticism. You know – help.

I can’t begin to tell you the number of times during my tenure in the General Assembly I heard “Why do y’all talk about nothing but abortion and guns???”
To which I would reply, “We don’t. That’s just what’s reported.”

It be what it be.

AAAAAND we’re back to the Fox News poll.

Two weeks ago, the Fox poll showed Terry McAuliffe leading Glenn Youngkin 51-46. That seemed a little off given the other polls showing a tightening race and just two weeks before that Fox had McAuliffe at +4.

Do I think the electorate has been trending towards Youngkin and the Republicans?

But a 13-point swing in two weeks?

Hopefully that will be the very last of the publicly released polling.

We will keep this one private as well and not broadcast it on You Tube.

So, where are things? Still tight, but obviously the trend is towards Youngkin and the GOP.

Additionally, according to the recent finance reports Youngkin has much more Cash on Hand to finish out the race than McAuliffe does. That was the biggest takeaway for me in the last reports.

Youngkin had $6MM more COH as of last week. That is HIGHLY unusual for Virginia Republicans in late October. It’s also a good sign for them. 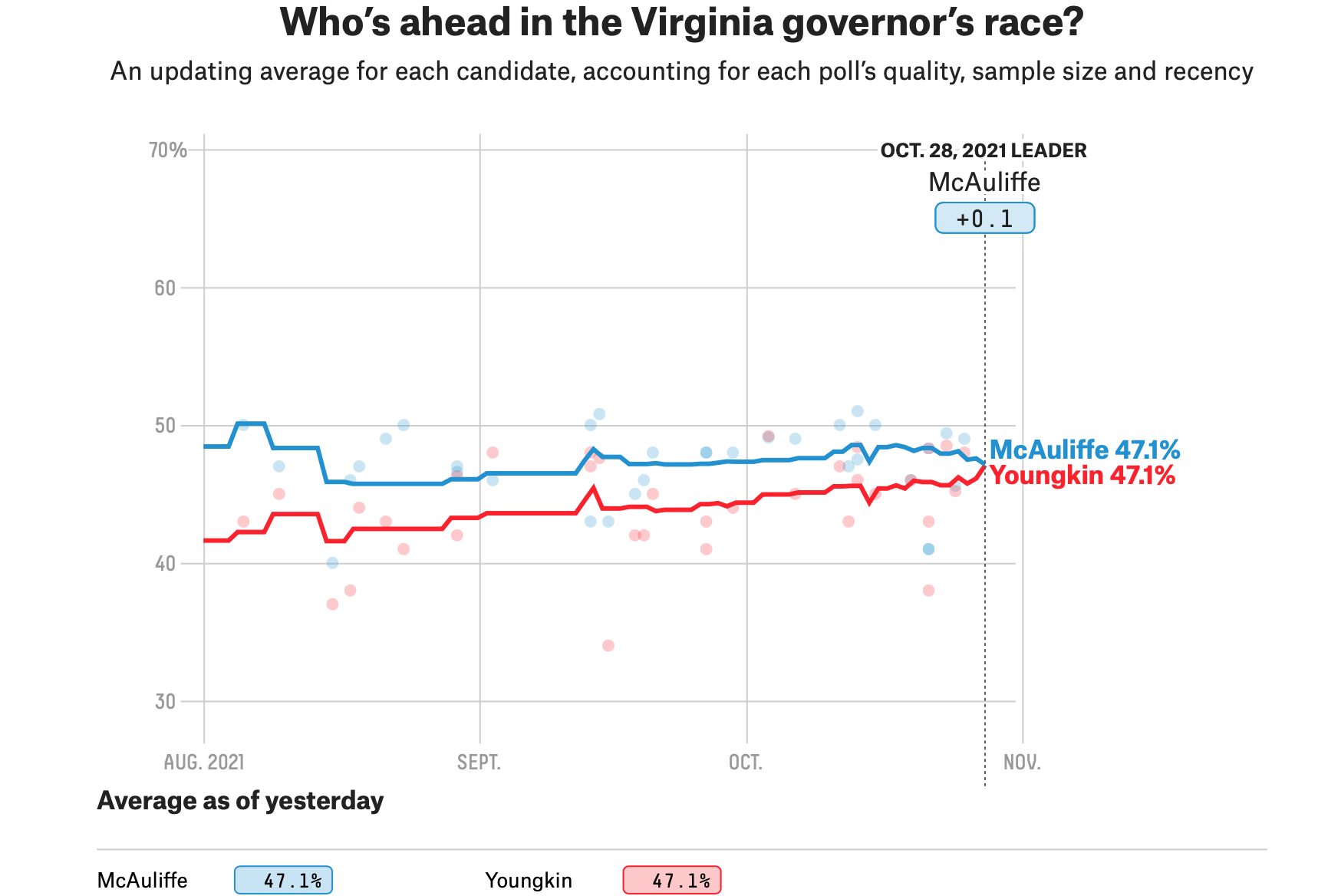 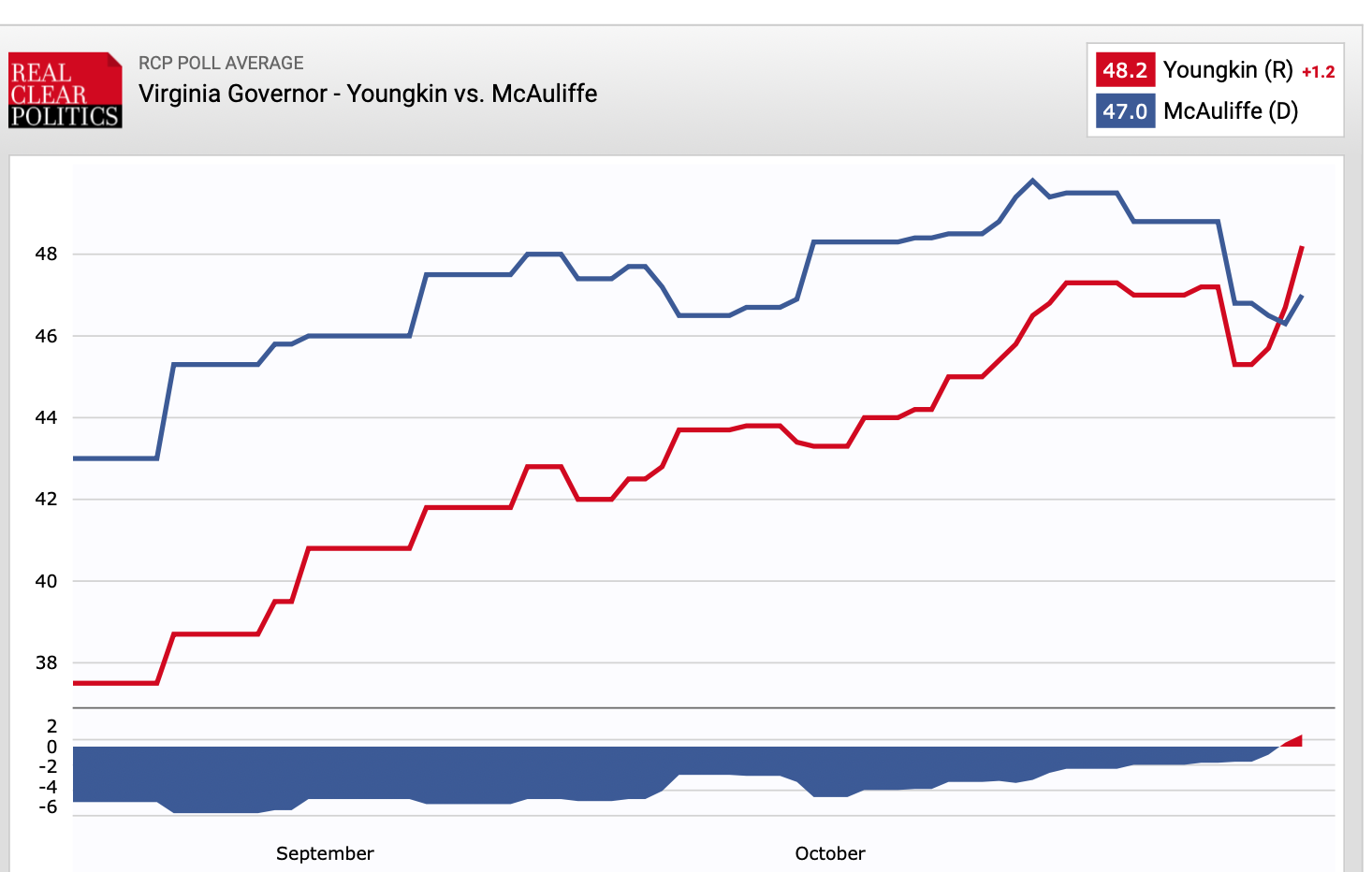 Even the folks who AVERAGE the polling disagree.

However, make no mistake when it comes to the stakes in this election. They are MASSIVE.

The political eyes of the nation (and perhaps the world) are on Virginia for the next week.
Buckle up.

Chris Saxman is executive director of Virginia FREE. This column has been republished with permission from his Substack column, The Intersection.

This entry was posted in Elections and tagged Chris Saxman. Bookmark the permalink.