School Board Races: The Next Best Hope for Our Children 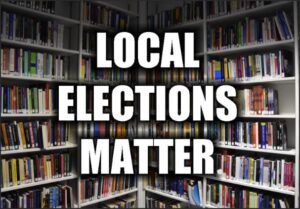 by Craig DiSesa and Nancy Smith

“I’m just gonna have to step in. You need to stop saying, as a Board member, we are giving pornography to minors. … It does not happen!”

That was the reaction of Virginia Beach City Public Schools Superintendent Aaron Spence to School Board member Vicky Manning’s assertion that there are pornographic books in the Virginia Beach City school libraries. She was referring to books such as Gender Queer and Lawn Boy, which have illustrations that depict sexual acts between two individuals.

Superintendent Spence was quibbling over the definitions of pornography and sexually explicit material. The difference between the two phrases is such a fine line that it doesn’t matter what you call it. If you have seen any of these books, you will see they contain illustrations that are inappropriate for developing minds and will create tremendous confusion among adolescents and pre-adolescents.

Even more disturbing is that introducing this type of material to children is often a technique used by people who want to groom children. Essentially, schools are giving predators a gateway to sexually and physically abusing our children.
The images in these books are so bad that when Senator Bill DeSteph, R-Virginia Beach, was trying to obtain photocopies for purposes of introducing parental-notification legislation, the attendant at the photocopy store not only refused to reproduce the images but also said he was obligated to report the Senator to the police. When the Senator finally was able to make copies and present them in the Senate Education and Health Committee, several members of the Committee refused to open the envelope containing the illustrations.

Although these sexually explicit books are a huge problem in our schools, an even bigger problem is the school boards that approve these materials. School boards across the Commonwealth have been somewhat tolerant of parents’ comments, but ultimately ignore them. These same school boards have been sweeping under the rug incidents of sexual assault, shootings, drugs, and fights. In some cases, they prevent parents from speaking at meetings, and sometimes they leave the dais when the pressure becomes unbearable.

An all-too-common problem with these school boards is that they have abdicated their responsibility to their division superintendents. This has given superintendents a tremendous amount of control and a false sense of power. Superintendent Spence spoke to School Board member Manning as if she were a subordinate. We have news for the superintendent: he works for the School Board, not the other way around.

Many school divisions in Virginia are large, complex organizations with budgets of $1 billion or more. Consequently, school boards rubber stamp budgets and adopt policies, many of which were passed down with state and federal strings attached, without really understanding the curriculum initiatives and dangerous precedents that have been put in place. Sadly, the days of the 4 R’s are long gone. There are now agendas in place that put our children and their families’ values at odds with what is being taught in the schools, and it’s happening all over Virginia.

Last year, in response to parents starting to share their concerns at school board meetings, the National School Board Association sent a letter to President Biden suggesting that parents who dare challenge the school boards should be considered “domestic terrorists.” And, of course, we all know Terry McAuliffe’s famous gaffe in his second debate with Glenn Youngkin, when he said parents shouldn’t “be telling schools what they should teach.” In many cases, school boards are not the friends of parents.

As the people who decide how our public schools operate and teach our children, representatives on our school boards have an incredibly important responsibility.  The job requires commitment, research, time away from family, a thick skin, and most of all compassion for the children and their parents.

Unfortunately, over the past few decades, school boards have been infiltrated by members who don’t reflect their communities’ values. In Virginia, school boards across the Commonwealth are controlled by progressive ideologues, even in traditional communities. The reason is that people haven’t been paying attention to school board races, and the progressive left took advantage of that apathy.

Fortunately, that is changing.

The only way Virginia citizens can change this injustice to our children is to engage in school board elections. We need people who reflect the values of their community to step up and fight for the families who live and work there. This can be done in several ways. People can explore the idea of running for school board, or they can get involved in a school board race by knocking on doors for their candidate, contributing money to their campaign, and introducing candidates to friends and neighbors.

In Virginia, we are at a crossroads. The November 2021 election of Governor Glenn Youngkin, Lieutenant Governor Winsome Earle-Sears and Attorney General Jason Miyares demonstrated that parents can change the course of history for the better. That election gave us hope, but we still have our work cut out for us. Parents and concerned citizens must continue to battle for the safety, the innocence, and the future of our children!

Craig DiSesa is president at The Middle Resolution PAC and Nancy Smith is political director.

This entry was posted in Education (K-12), Elections and tagged Guest contributors. Bookmark the permalink.