Recidivism: The Rest of the Story, Part 1 — How Large Is It?

Recently, Governor Northam issued a press release applauding the Department of Corrections’ (DOC) most recent recidivism rate of 23.9% and noting it was one of the lowest in the country. All that is true and is highly commendable, but, as Paul Harvey used to say, “Now, for the rest of the story.” 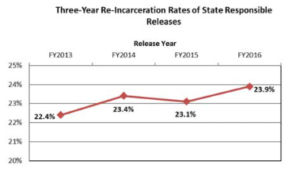 While a recidivism rate of 23.9% is excellent, it is actually an increase over the most previous rate of 23.1%. Although DOC likes to say that the most recent rate is “only” 0.8 of a percentage point more than the previous year, over the last four years, as shown by the accompanying graph, the recidivism rate rose from 22.4% to 23.9%, an increase of 1.5 percentage points.

To be fair to DOC, there were some unusual circumstances that could explain much of the recent increase in recidivism. But, those explanations are not simple and do not fit neatly on a press release.

Before examining those explanations, it would be helpful to explain how recidivism is defined.

Recidivism is measured over a three-year interval from the date of an offender’s release. The most recent rate of 23.9% applies to those offenders released in 2016 and any criminal activity committed by them through 2019. DOC then waits a year to ensure that the court records are complete. The most recent recidivism data is for the 2016 cohort, for which DOC began analyzing the three-year data at the end of 2020.

Recidivism can be expressed in one of three ways:

Unless specified otherwise, when DOC and Virginia officials refer to recidivism, they are referring to the re-incarceration rate. Because re-incarceration over a three-period is the measure most commonly used by states (42 states), it is the one used when comparing states. It also happens to be the lowest rate among the three.

To its credit, in its official reports, DOC shows all three recidivism rates.  However, when generally discussing recidivism, politicians, DOC officials, and state staff stick to re-incarceration.

Next part:  Some explanations for the increase