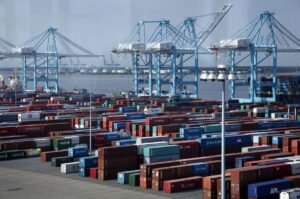 An enduring question on this blog is what accounts for the lagging economic performance of the Hampton Roads metropolitan statistical area. Growth in Gross Domestic Product since 2001 has been roughly half that of Virginia’s, while growth in real personal income since 2010 has lagged by 30%. We have explored various explanations on this blog from the necessity of adapting to increased flooding to a cap on natural gas supplies, from restrictions on water usage to excess reliance on the military as an economic foundation.

Ironically, an important reason for the region’s slow growth may be the success of one of its key industries, its ports. Since the introduction of cargo containers, ports have required more land. As ports expand, argues a new paper published by the National Bureau of Economic Research, they literally “drive up land rents and crowd out other economic activity.”

Containerization of global supply chains has benefited world trade and economic growth by driving down the cost of ocean transport, boosting aggregate world welfare by 3.95%, say Cesar Sucruet, with the Centre National de la Recherche Scientifique, in Paris, and his three co-authors in “All Aboard: The Effects of Port Development.” But containerization has tradeoffs in port cities.

The introduction of shipping containers created a revolution in the transportation industry. Containers increased ship turn-around times in ports and sped the evolution toward larger vessels. Ports that adapted to these trends gained market share. But there were costs.

Containerized terminals need more space as it is the easy accessibility of the containers that allows for efficient on- and off-loading. The containers are lined up next to where the ships dock, and space is also needed to rapidly off-load cargo. There are additional dedicated ‘upland areas’ near the facility that allow for the containers to be temporarily stored … and new space needed to be made for large ‘railyards’ where containers could await transshipment onto rail carriages.

Data from New Orleans suggests that the land-intensity of port activity increased by about 75% with the introduction of containers. Ports well suited to containerization experienced shipping booms, but those booms did not necessarily translate into population inflows. The authors viewed that finding as a surprise. Standard economic models would predict an inflow of population as improved market access makes a location more desirable for firms and consumers. Those expected benefits, they theorize, are offset by the need to reserve land to store the containers and the resulting impact on real estate prices. Effects are not uniform globally, though. Ports in poor countries see greater gains from containerization than ports in wealthier countries.

Conversely, the more expensive the land in a city, the greater the opportunity costs of port expansion. The authors argue that port expansion in the world’s most expensive cities — such as Hong Kong and Singapore in Asia, and New York and San Francisco in the United States — might be counter productive. Land is better allocated to other activities. Thus, in a city like London, once at the center of world trade, the  Canary Wharf financial district was redeveloped from old port land.

The study provides no data on where Hampton Roads falls on the spectrum between poor cities and rich cities. But Virginia’s port cities of Norfolk, Portsmouth and Hampton Roads clearly are not are busting at the seams with other economic opportunities. We do know that Virginia Port Authority has been acquiring waterfront land over the past few decades to expand its cargo operations. We know that port expansion has created other effects such as increased trucking traffic and transportation bottlenecks on Interstate 64, the primary connector to the Interstate highway grid. And we know that the ports also make major claims on state and federal largess, such as channel dredging and state-backed bond financing for port expansions.

Every year the Strome College of Business at Old Dominion University publishes a State of the Commonwealth report in which its researchers focus on several  topics of economic interest. Might I humbly suggest that that they consider the thesis of Decruet et al. and examine the impact of containerization on Virginia’s ports. A deep dive would document the land acquisition by port authorities, the impact on land prices, the effect on road and highway congestion, the claim on regional resources for port-related infrastructure, and the effect on maritime employment. Such a study would have to take into account such complexities as the overlap between port, naval and shipbuilding activity, not to mention the hoped-for benefits in building and maintaining offshore wind farms. One way or the other, anyone interested in the economic future of Hampton Roads needs to understand the tradeoffs.

This entry was posted in Business and Economy, Economic development and tagged James A. Bacon. Bookmark the permalink.