Analysis of State Use of Federal COVID Funds

(Note:  All of the data presented in this post is based on the author’s analysis of raw expenditure data from the state’s accounting system (CARDINAL) for FY 2020 and FY 2021 through 2/22/2021.)

As of February 22, state agencies had spent or disbursed $11.9 billion in federal COVID funds.

Two major categories of expenditures accounted for about 86 percent of that total.  The Virginia Employment Commission had paid out $8.8 billion in unemployment claims.  Secondly, in accordance with federal law, the state had transferred $1.4 billion to local governments.  The remaining $1.7 billion was spent directly by state agencies or disbursed by them as grants to local or regional government agencies or to private entities.

Contrary to what one would expect from the listings in the budget bill and the presentation by the Secretary of Finance to the money committees (see my earlier post here), almost all state agencies got some federal funding to offset their costs incurred due to the pandemic.  Of course, many received relatively small amounts.  For example, the Department of Taxation has received about $22,500 for custodial services.

The table below lists the fifteen agencies with the largest expenditures, excluding unemployment benefits and pass-through grants to localities.  The budget subagency within the Department of Education established for the appropriation and distribution of state aid to local school districts has, by far, spent the largest amount.  Of the $435 million disbursed, about $267 million was for schools generally and about $163 million was for child nutrition programs (school breakfast and lunch programs).  For several of the other agencies on the list, one activity accounted for the vast preponderance of the amount spent:  DMAS–$159 million for nursing home services (hazard pay for personal care aides and assistants and funding for day support providers and residential support providers); DSBSD—developing and administering a grant program for small businesses (see description here); and SCHEV—grants to private institutions of higher education. 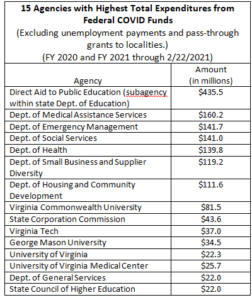 Attached (here) is another table that shows details on how the $11.9 billion was used.  Some explanation of the table’s organization is needed.  The state’s chart of accounts includes a level of detail for budget development and recording of expenditures that goes beyond the program and service area numbers that are shown in the Appropriation Act.  These codes are assigned for expenditure categories that are common across agencies, such as classified salaries, electricity, gasoline, office furniture, etc.  The attached table lists the statewide totals for these categories, called subobjects.  (I took the liberty of consolidating a few subobjects, primarily for the sake of clarity.)

The broad grouping of subobjects for which there were the most expenditures was “Transfer Payments”.  This category includes money provided to individuals or grants to governmental or nongovernmental entities.  It does not include money an agency used to pay its own employees or to pay for functions it performed directly.

The total in the Transfer Payments category was $11.2 billion.  Included in that total are the already-mentioned $8.8 billion in unemployment claims, $1.4 billion in pass-through payments to local governments, $435 million for K-12, and $114 million in grants to small businesses.  Expenditures for the following program areas also exceeded $100 million:

As illuminating as the subobject detail is, it does have limitations.  It tells us how much was spent in a category that is common to all agencies, but not specifically what it was spent for by a given agency.  For example, the data shows a total of $90.9 million spent on lab supplies and $89.0 million spent for medical and dental supplies.  But, it is not possible to know from those numbers how much was spent on PPE.  Similarly, $5.1 million was spent on wages (temporary or part-time employees), but we cannot discern from that data what those employees were actually doing or working on.

The state’s accounting system does provide additional fields that agencies could use to provide more detail about expenditures, such as specific activities or projects.  These fields are optional for agencies to use, and many do so.  That detail could provide a crosswalk between the subobject data and the specific activities and purposes outlined by the Secretary of Finance.  However, that additional level of detail is not readily available.  Nevertheless, future posts are planned that will provide more detail on the expenditures of some specific agencies.

Some Perspective and the Future

$11.9 billion is a lot of money from any perspective.  However, it is not the total of federal COVID funding that has flowed into the Commonwealth.  There were the stimulus checks sent to individuals, the PPP loans/grants to businesses, and the $200 million sent directly to Fairfax County, in addition to any other grants that individual organizations were able to obtain.  Somebody somewhere may be keeping a running grand total, but, if so, I do not know how to find it.

As for the future, more money is coming.  The U.S. Senate just passed its version of the next stimulus package, said to total $1.9 trillion.  The Biden administration has signaled its approval and the House will very likely go along in short order.  There have been preliminary estimates that Virginia will get $3.8 billion from this package.

Who will make the decisions on how to spend that additional money is somewhat up in the air right now.  For the previous pots of money, despite “guidance” provided in the Appropriation Act, Governor Northam has had the discretion to allocate the funds in the manner he felt best suited the needs of the state.  The General Assembly apparently got miffed at his ignoring their recommendations.  Language included in the budget amendments recently adopted by the legislature directs that all new federal COVID-related money provided to the Commonwealth be placed in a special fund.  Furthermore, “no expenditure of funds from the…Fund shall be made unless specifically appropriated in a general appropriation act….”  There is already some talk of another special session dedicated to determining how to spend this money, along with electing new judges.  It will be interesting to see if the Governor vetoes this language.

This entry was posted in Budgets, Finance (government) and tagged COVID-19, Dick Hall-Sizemore. Bookmark the permalink.