Philanthropist James Dooley Soon to Be Canceled by VCU 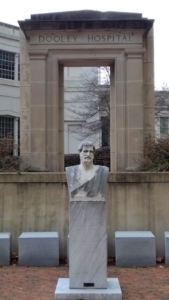 The Dooley Hospital for Infectious Diseases at Virginia Commonwealth University no longer stands. But the portico/entrance of the original building has been retained as a free-standing memorial on VCU’s medical campus. The name of the Dooley Hospital is etched in limestone.

The Virginia Commonwealth University’s Committee on Commemoration and Memorials has targeted the Dooley Hospital name for the memory-hole treatment. A wealthy Richmond businessman by the name of James H. Dooley donated the funds during the Influenza epidemic of 1919 for the construction of the hospital. The son of an Irish immigrant, Dooley contributed to the rebirth of Richmond after the Civil War through his investments in real estate and railroads. He was a leading philanthropist, he supported the arts, and he advocated universal public education — which made him pretty progressive for his era. He and his wife also left bequests to establish the Richmond Public Library, St. Joseph’s Villa, and the Crippled Children’s Hospital. Their mansion and grounds, Maymount, is open to the public today as a popular family destination.

Dooley’s unpardonable sin? He enlisted in the Confederate Army as a private. He was wounded, taken prisoner, released in a prisoner exchange, and discharged due to his disability.

Unlike the Richmond statues to Lee, Jackson and Stuart, the memorial to Dooley glorified not his service to the Confederacy but his benefaction to the community. The naming of the hospital was not connected in any way to the Lost Cause narrative, the imposition of the Jim Crow regime, or massive resistance to desegregation, the usual explanations for taking down the Monument Avenue statues or other emblems of the Confederacy.

The VCU committee recommends “de-commemoration and removal of the name and all associated mentions and references to the Dooley Hospital.” On what grounds? “Dooley served in the confederate army.”

Likewise, the committee recommends erasing any mention of Simon Baruch, Lewis Ginter, and Fitzhugh Lee, all of whom served in the Confederate Army. (The statue of Fitzhugh Lee statue, who happened to serve as Virginia’s 40th governor, has been removed already.)

The obliteration of memorials to an entire generation of Richmond philanthropists is a purging of the past reminiscent of the Jacobins, Bolsheviks and Taliban. If VCU follows through on the committee’s recommendations to erase the names of the men who did so much to build the institution, it will be to the university’s ever-lasting shame.

Update: I have amended this post to correct a mis-statement that Fitzhugh Lee did not serve in the Confederate Army.