On the Naming of Buildings

The University of Richmond has taken a nuanced, or ambivalent, position, depending on your perspective, in the kerfuffle over building names honoring slaveholders, Civil War generals, or supporters of segregation.

Before discussing its position, it may help to provide a brief profile of the school for readers who may not be familiar with it. UR is a small (3,147 undergraduates), private university situated on a beautiful, secluded campus in Richmond’s tony West End. In 1969, it was transformed from a financially-troubled,  local college into a well-endowed institution with a national presence when E. Claiborne Robins, chairman of the A.H. Robins pharmaceutical company, gave it $50 million. At the time, that was the largest amount a living benefactor had ever given an American university.

A large segment of its student body is from the Northeast; only 18 percent of the students are from Virginia. It is pricey: the annual cost of tuition, room, and board is $72,500. (Disclosure: My daughter is a graduate of the school. She had a generous scholarship; I could not have afforded it even back then when tuition was much more reasonable.)

Two buildings have been targeted by student government groups: Ryland Hall and Freeman Hall. The first was named after Robert Ryland, who was the first president (1841-1866) of what became the University of Richmond. His name on the building has drawn student ire because he was a slaveholder and, during his tenure as president, the institution hired slaves from local slave owners to help run its daily operations and serve students.

Freeman Hall is named after Douglas Southall Freeman, long-time editor of the Richmond News Leader and a strong supporter of segregation. He was also a noted historian.  His multi-volume biographies of George Washington and Robert E. Lee won Pulitizer Prizes and this three-volume Lee’s Lieutenants: A Study in Command also has won acclaim. Finally, he was rector of the board of trustees of the University of Richmond from 1934 to 1950. 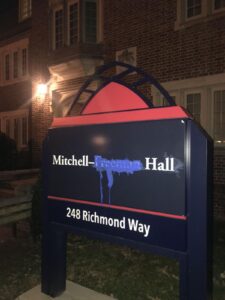 Freeman Hall will become Mitchell-Freeman Hall. John Mitchell, Jr. was the editor of the Richmond Planet in the first part of the 20th century and was one of the leading voices denouncing racism and segregation. He once ran for governor and frequently challenged Freeman in his editorials.

In explaining his choice to join the names of Mitchell and Freeman on the building, Crutcher said that, as a Black academic, he had often walked through the halls of buildings named after people who would have viewed him “as an inferior and an interloper simply because of my skin color. As a university president, I have been tempted to relegate such men to the ash heap of history.”  Instead, however, he opted for a “braided narrative.” He concluded:

“I firmly believe that removing Ryland’s and Freeman’s names would not compel us to do the hard, necessary, and uncomfortable work of grappling with the University’s ties to slavery and segregation, but would instead lead to further cultural and institutional silence and, ultimately, forgetting.”

Descendants of Mitchell have expressed delight at the recognition being accorded him.

As for Ryland Hall, Crutcher announced that the name would be retained, while permanent recognition would be given to the people he enslaved by dedicating a terrace in the renovated building to them.

Crutcher acknowledged that he was “not naïve enough to think that everyone’s going to be happy about our approach here.” It is certainly the case that some folks are unhappy. The student government leaders voiced dismay that the offending names will not be removed. A newly-formed coalition of Black students has accused the university of supporting white supremacy. They have issued a statement airing their discontent and demands, along with a petition, signed, as of Tuesday, by 550 students and staff. (The statement includes demands that go beyond the building name controversy.) In the greater community, the Richmond Free Press, a local influential newspaper that covers issues particularly concerning the Black community, voiced opposition to continuing to honor white supremacists. A columnist for the Richmond Times-Dispatch has declared that the university “cannot reject and uphold white supremacy at once. UR needs to pick a side.”

I have been conflicted on this issue for some time, but the controversy at UR has helped to clarify my thinking. On the one hand, I think perhaps too much is being made over the naming of buildings. After a few years, most users of those buildings pay little attention to their names, except as a means of distinguishing one building from another. At William and Mary, I lived in two dorms, Brown and Stith Halls, and had no idea who they were named after and hardly, if ever, wondered.

I do not doubt President Crutcher’s sincerity, but I think he is naïve to think that having the names of both Mitchell and Freeman on the same building will lead to a “grappling with the University’s ties to slavery.” Rather, it seems as if he is trying to thread a needle and giving too much credit to the desire of students to be introspective. In a year or so, students will move on, “grappling” with other grievances.

On the other hand, institutions are defined somewhat by whom or what they honor. As for Ryland Hall, the university should retain that name. Yes, he was a slaveholder, but, he was also the first president of the institution that evolved into the present day University of Richmond. For that, he deserves recognition.  We can honor people for their achievements, while recognizing and condemning, their sins. After all, if we were to strip the name of any slaveholder off a public building, many of the buildings, as well as the name of the law school, at William and Mary would have to be renamed. James Madison and George Mason universities would be in for new names. The Washington, Jefferson, Madison, Monroe, and Patrick Henry state office buildings would be renamed. And, there is no need to talk about the University of Virginia.

That being said, the Freeman name should be taken off the UR building. Despite his acclaimed biography of George Washington, he has become identified with the Confederacy and the “Lost Cause.” Also, he was a staunch defender of segregation and white supremacy long after the Civil War was over and slavery was abolished.

In summary, I would draw the line at the Civil War. Persons who lived before that time and contributed to this country or an institution should be honored, despite their also being slaveholders, if that were the case. At the same time, their enslaving of human beings should not be overlooked or minimized. But persons who fought against the government of the United States and tried to divide this country should not be honored. Neither should we honor persons who actively supported segregation and publicly proclaimed that people were inferior on the basis of their skin color or heritage.

As to whose name should replace that of Freeman on the UR building, it is too late now, but I do not think it should be John Mitchell. As admirable as he was, he had no connection to the school. Rather, it seems he is being used as an excuse to keep the Freeman name. If the university had asked me, I would have advocated honoring some notable person who had been associated with the institution. Specifically, I would have suggested E. Bruce Heilman, president from 1971 to 1986, who led the development of the university to the institution it is today. To preempt any objection by any UR alumni reading this post, I realize that there is a E. Bruce Heilman Dining Center  But does anyone actually call it “Heilman Dining Hall”?

This entry was posted in Culture wars and tagged Dick Hall-Sizemore. Bookmark the permalink.