No Excuses for Chesterfield Voting Problems 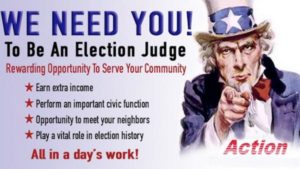 I’ve been an election officer twice now, for the June primary and now for this massive mid-term election, so that makes me a real expert, right?  Hardly.  But I read the Richmond Times-Dispatch story about the problems Tuesday in Chesterfield County with deeper insight than I would have a year ago.

Know first that after the tables are set up and Apple poll book is turned on and the signs taped up, before the doors open, the seven of us at Precinct 115 raised our right hands and recited the oath, then signed it.  There is a quiet moment when the blood of the patriots who secured and preserved this sacred right is remembered, if not specifically mentioned.

To prepare for my two stints inside the poll I’ve attended four training classes, the first of them taking most of a Saturday.  During those classes the level of preparation behind the process becomes evident.  Even more enlightening is the process of counting and recording and preserving every scrap of paper and data in the hours after the doors close.

It is a very hands-on process prone to human error, and surprisingly decentralized, with local registrars and electoral boards the key individuals.  The problems outlined in that story are inexcusable and land squarely at the top.

Everybody knew that the turnout for this election would skyrocket. Please. The assumption should have been plan and equip for a presidential year turnout, because that is what we almost had.  Did everybody just forget the crowds from 2016, 2012, 2008?  The Chesterfield officials complain about a 60 percent turnout causing congestion, and inside our Richmond City precinct almost 68 percent voted in person very smoothly.

Whining about the turnout should be dismissed.  But not all the human error involved is at the local level.  A lot of lip service is given to how important this process is and then other considerations screw it up.

Local and state officials are too quick to change precinct lines or divide an existing precinct between two different congressional or legislative districts.  The reason is usually driven by some kind of gerrymandering process, and the next gerrymander for some legislative districts will be now be designed by a federal court.  The result – and they should know this – is high levels of confusion.

On top of the 1,042 people who walked into our precinct and voted Tuesday, there were easily another 200 who had to be sent to another place because of a change after the 2017 election. “But I voted here last year” or “why wasn’t I notified” were the common complaints.  One piece of mail is not notice.

Thank goodness the electronic poll book identifies their new voting place.  Thank goodness after the initial morning rush we never had long lines again (despite the 68 percent turnout.)  But if there were Chesterfield precincts where the boundaries had also been jumbled, people may have waited a long time before the person checking the list sent them away.

Another major hang-up, I’m sure, were the constitutional amendments.  Few people had even heard about them, let alone made up their minds.  Our greeter was handing out the official brochure and a surprising number of people stopped cold and tried to read that or looked at the chart on the wall.  The General Assembly puts these things on the ballot with near-zero resources to educate votes, badly gumming up the voting process.

Finally, there is human error in the assumption that somebody else will do this job and we don’t have to.  Given the low pay for the day ($130 for 16 hours!)  it’s basically a volunteer activity and should be promoted that way.  Do not assume your locality has enough qualified people. I repeat my earlier invitation – join the elite!

I’ve enjoyed getting to know the crew where I work (not my home precinct) and look forward to next time.  I need to buy some honey from the fellow who serves as our chief officer, a somewhat thankless job (thanks, Ames.)

I hope the 90-something-year-old WW II vet wearing that worn Eighth Air Force ball cap who walked slowly in on his cane comes back next time.  He and his peers refreshed the Tree of Liberty well.  Absentee?  Not for him.  I understand the arguments for easier remote or early voting, and Chesterfield just added to them, but there is something to this ritual that is every bit as powerful as any religious ceremony.

This entry was posted in Elections, Electoral process and tagged Stephen D. Haner. Bookmark the permalink.