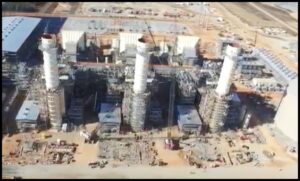 Historic and quaint Charles City County southeast of Richmond is home to a number of restored plantations, Native American tribes and, its centerpiece, the placid, marsh-lined Chickahominy River. Yet, quietly and without much media attention, Charles City is on its way to becoming a fossil fuel powerhouse as two proposed natural gas plants move forward.

The plants will tap a Virginia Natural Gas pipeline linked to the giant Transco pipeline that runs through from the Gulf Coast to the Northeast. The electricity will apparently be supplied to the PJM grid that runs from Illinois to the East Coast.

Company statements claim that the Chickahominy plant will help serve Virginia, which is collecting new data centers that demand great gobs of power.

The two plants, however, raise important questions about permit-letting and natural gas markets.

Critics have claimed that the Chickahominy plant flew in under the public’s radar screen and some residents didn’t know it was being proposed.

According to the Virginia Mercury, the only news outlet in the state that has provided extensive coverage of the story, emails obtained under the Freedom of Information Act show that state Department of Environmental Quality officials were at one point taken aback by how little information the company provided.

At the June 21 permit hearing, one resident, Wanda Roberts, said she didn’t know of the meeting until a few days before, according to the Mercury. DEQ officials said that the plant will be the “cleanest facility of its type in the country, the Mercury reported.

Environmentalists are concerned that the plant will pump large amounts of carbon dioxide into the air. Glen Besa, the former head of the Virginia Chapter of the Sierra Club, wrote on his Facebook page: “Another Air Board meeting, another Dirty Fracked Gas power plant and 6 million more tons of GHGs (green house gases) approved in the middle of a climate crisis.”

The projects raise other questions about what the true situation is with natural gas demand. Dominion and its partners cite high demand as the reason for the controversial, $7.5 billion Atlantic Coast Pipeline billion pipeline that would stretch from West Virginia through Virginia and on to North Carolina.

The idea is to take plentiful fracked shale gas from the Marcellus field in West Virginia and Pennsylvania to the Southeast. Backers of the Charles City County facilities have the same idea. They plan on tapping a Virginia Natural Gas pipeline that connects with the Transco pipeline that runs through Virginia from southwest to northeast and supplies much of the gas the state uses.

The plan begs a question. If gas is supposedly in such short supply to require Dominion’s pipeline, why, then, does Virginia Natural Gas apparently have no problem supplying two giant natural gas generating stations?

According to news accounts, Virginia Natural Gas has complained in the past about the difficulties in supplying the South Hampton Roads area with natural gas. Opponents of the Atlantic Coast Pipeline have said that there’s actually plenty of gas available and more pipelines are not needed.

The fix appears to be in for more expansion, however. The Air Pollution Control Board recently came under fire for approving a gas compressor station for the Atlantic Coast Pipeline near an African-American community in Buckingham County.

Two air board members had questions about the plan but they were replaced by Gov. Ralph Northam before a vote was taken approving the station. The governor’s office said the terms of the two members had expired and the replacements were routine.

One wonders how many other natural gas plants are planned but not widely known.

Peter Galuszka is a free-lance writer based in Chesterfield County.

This entry was posted in Energy. Bookmark the permalink.