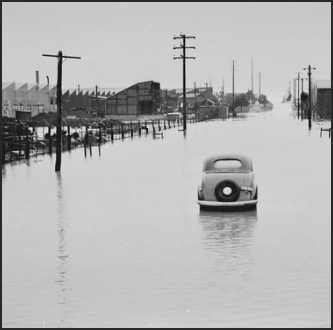 I was surprised when my granddaughter excitedly phoned last night to tell me that due to flooding, school was cancelled today. I was reminded of the time area schools closed prematurely for snow and not a flake fell from the sky.

But then I checked the forecast: High tide today could be 7.3 feet above normal.

That’s serious. It means all of the usual places will flood and some areas that haven’t flooded in decades.

That also means a certain type of individual will be plying the roads.

I’ve written about them before.

Click on 24-hour disaster-time TV — such as we saw over the weekend — and you’ll catch images of brave storm-chasing pilots who flew into the eye of the hurricane to get accurate weather reports, rescue workers helping dazed survivors, linemen restoring power to hurricane ravaged neighborhoods and folks with chainsaws buzzing their way through tree-littered neighborhoods.

But there’s a less celebrated group of storm warriors who rarely are recognized.

The folks who dare to go where no one ought to in a storm. Into the floodwaters. At full throttle. In their cars.

They’ll be out today in Hampton Roads. Trust me.

You’ve seen these captains of the combustion engines. Don’t bother trying to tell them that water will ruin their motors. That makes them want to prove you wrong.

To them, a Chevy Malibu is a clipper ship with tires. Sure, you sometimes see them stranded in the middle of flooded streets with water lapping the side-view mirrors, or on the tops of their cars waving for help. But are they embarrassed? Not really.

“I had no idea it was so deep,” they shrug as a slickered-up news reporter sticks a wet microphone to the window.

They’re a breed apart, for sure. Against the advice of emergency rescue personnel, they venture into the teeth of a storm, come upon a puddle the size of Lake Erie and what do they do?

Do they slam on the brakes? Do an about-face? Get out to investigate?

No, these automotive Ahabs stomp on their accelerators, point the bows of their Buicks toward the channel and shoot up dual fountains of floodwater as they speed for the other side. If they make it, the excitement continues as they drive the next few blocks without the aid of brakes.

Perhaps you saw the memorable clip some time ago of a Jeep navigating a Norfolk street. The water was up to the headlights, sloshing under the hood and yet the driver kept going. In what should have been a no-wake zone, the motorist made his own surf.

So, what do you say we pause and salute these entertaining subcompact submariners, these skippers of the SUV, these commanders of the Corollas?

Without them, there would be precious little comic relief during a waterlogged natural disaster.

In a flood column I once wrote on this rare breed of driver I quoted a young woman who worked in a sandwich shop who’d had a scare on her way to work that day. She was riding with a friend when his car began to stall in a puddle so deep it reached over the bottoms of the doors.

“You couldn’t tell how deep the water was until it was too late ?” I suggested.

“Well, there was a guy kayaking in it,” she admitted sheepishly.

“Maybe that should be a rule of thumb,” I said. “If a boat is in the water, stay out of it with your car.”

“But we made it,” the motoring mermaid exclaimed.

Damn the floodwaters, full speed ahead.

This entry was posted in Disasters and disaster preparedness and tagged Kerry Dougherty. Bookmark the permalink.