How to Think About Monuments 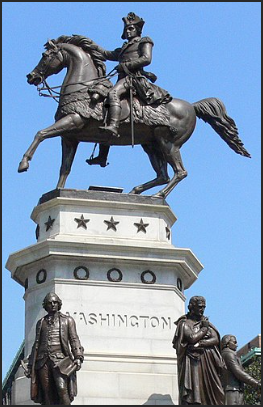 Statue of George Washington at the Virginia Capitol. Will he be canceled next?

The conservative movement in Virginia faces a huge dilemma: how to build a “big tent” political coalition that is welcoming to African Americans and other minorities while resisting the cultural cleansing of everyone associated, however remotely, with the Civil War, slaveholding or segregation — including founding fathers of the republic such as Thomas Jefferson and James Madison.

The iconoclasts are full of fury, and their logic is simple: monuments to Confederate soldiers and generals, they say, were erected as symbols of White supremacy and racism; White supremacy and racism must be expunged; therefore, these figures must be removed from the public sphere. Step by step, this syllogism has been extended to any figure tainted by racism, segregation, or slaveholding. An individual’s contributions and accomplishments count for nothing. Historical context is irrelevant. Artistic and aesthetic considerations of the statuary and pedestals as adornments to public places are of no import.

Conservatives and traditionalists have been powerless to reverse the momentum. They have mounted many lines of defense, but they have counted for naught. While many business and civic leaders lament the iconoclasm in private, they are too timid to speak publicly. No one wants to be tarred as an apologist for White supremacy. Governor Glenn Youngkin, who has been outspoken about “divisive” leftist concepts in schools, has been mute about monuments. The political parties are undergoing the greatest realignment in a half century as Blacks and Hispanics increasingly see the Democratic Party as antithetical to their values and interests. For Youngkin, there is no upside to standing up for the statues of Civil War generals.

The challenge, as I see it, is for conservatives and traditionalists to articulate a set of principles regarding monuments and memorials that does not alienate the demographic groups — Blacks in particular — that the Republican Party is courting. Indeed, the rhetoric of conservatives and traditionalists should fully acknowledge the fact that African Americans in Virginia and America endured centuries of slavery, racism, and segregation, and that their experiences should not be discounted in our re-telling of history. Insofar as they fought for liberty, we should unabashedly embrace them as our heroes, too.

It is not yet clear how we reconcile the seemingly contradictory aims of preserving the memorials while reaching out to African Americans. Yesterday I attended a meeting organized to address the wave of iconoclasm. The meeting was off the record, so I cannot offer specifics. But it’s fair to say that the attendees were united mainly by their despair at the erasure of history and their conviction that the cultural cleansing is part of a larger effort — like the 1619 Project — to de-legitimize the founding fathers and founding principles of the United States. However, there was nothing resembling a consensus on the path moving forward.

Despite many caustic remarks — such as the recent comment that Bacon’s Rebellion has become www.defenseofthewhiteman.com — I have offered the blog as a platform for conservatives and traditionists to explore Virginia’s past. There is literally no other such forum in Virginia. I make no apologies for enabling the expression of thoughtful conservative viewpoints.

Broadly speaking, there have been two themes to the defense of monuments and memorials.

First is the “they-got-it-all-wrong” defense. If you examine the inscriptions on the monuments and heed the words of the men and women who erected the monument, you can see that upholding “White supremacy” usually had nothing to do with it. As Carol Bova explains in her post about the Confederate statue in Mathews County, citizens who had endured the searing four years of sacrifice known as the Civil War were honoring loved ones who had paid the ultimate price. The reason the citizens of Mathews didn’t erect the statue until 1912, which coincided with the apogee of Jim Crow, was that the Civil War generation was dying out and the Mathews community, impoverished by the war and its aftermath, was too poor until then to pay for a fitting memorial. Much of the iconoclasts’ narrative is bad, ideologically-driven history.

A second apologetic theme focuses on why Virginians today honor the men in the monuments. We do not honor them for their association with the Confederacy or slavery — we honor them despite those associations. The iconoclasts can insist all day long what the monuments mean to them — White supremacy — but they cannot tell us what they mean to us. We revere Robert E. Lee for his integrity, his character, his battlefield genius, and his critical role, highlighted in another post today, in reconciling the South to its defeat and reintegration with the Union.

Those defenses are fine as far they go. To my mind, they have validity. But they won’t persuade the unpersuadable. We need a broader framework for preserving the artifacts of history from those who would destroy them.

I subscribe to the “the-more-history-the-better” argument. Another phrase for it might be “let’s-add-to-history-not-subtract-from-it.” A good example was found in Talbot County, Md., where there had been a controversy over a 13-foot copper statue of a young Confederate soldier inscribed with the names of local men who had died in the Civil War. Local leaders defused the issue for a time by erecting a statue to native son Frederick Douglass. Sadly, the additive solution did not last. Under pressure from the unforgiving, the Confederate statue was removed earlier this year.

But Talbot need not set the template. In a pluralistic society, different people have different heroes. Having an “inclusive” society means tolerating figures who might be out of fashion with the cultural elite. We can reinterpret and contextualize the meaning of the memorials, but we impoverish our culture and heritage by purging them.

I would add one more argument in favor of some (not all) of the monuments: the “did-they-move-the-ball-down-the-field” argument. If our only standard for historical figures is hewing to 21st sensibilities, we might as well tear down every statue, for not one person in the 19th or 20th century would be judged acceptable in every matter of race, class, gender or sexual orientation that obsesses the 21st century. The criteria we should apply are these: did the individual improve peoples’ lives? Did he or she transcend human frailties through the integrity of character?

Modern America did not emerge de novo, like Venus from the half shell, in its current incarnation. American democracy can be seen as a fitful 200+ year struggle out of the feudal and monarchical hierarchy universally practiced in the world of 1776 toward the egalitarian society we envision for ourselves today. We should judge historical figures not by some utopian ideal but by the degree to which they advanced or retarded the progress of American institutions toward greater freedom and equal rights.

This approach to history does not lend itself to simplistic good-evil interpretations. That’s a weakness, insofar as complex stories are more difficult to communicate. But it is a strength in that it better reflects reality, which is complex, nuanced and subject to continual reinterpretation.

This entry was posted in Culture wars, Virginia history and tagged James A. Bacon. Bookmark the permalink.