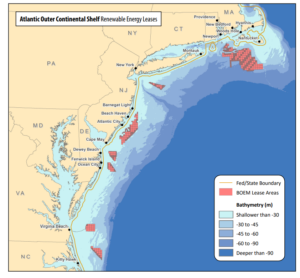 The following news release has been issued by the Thomas Jefferson Institute along with other coalition partners.

A coalition of public interest groups – The Heartland Institute, the Committee For A Constructive Tomorrow (CFACT), and the American Coalition for Ocean Protection (ACOP) – announced in late September that it has hired counsel to explore a lawsuit protecting the right whale from Dominion Energy Virginia’s efforts to place an offshore wind (OSW) project directly in their habitat off the coast of Virginia.

Virginia’s Thomas Jefferson Institute for Public Policy is participating in the American Coalition for Ocean Protection (ACOP). “While the Jefferson Institute’s concerns are more focused on the unreasonable ratepayer cost and ratepayer risk the project imposes on Dominion’s 2.5 million Virginia customer accounts,” noted Institute president Chris Braunlich, “we share the concern that environmental laws be applied uniformly and transparently, and not be ignored for politically-driven proposals.”

“Too much of the Dominion application is shrouded in secrecy,” Braunlich continued, “including the effect on wildlife in the area of the proposed windfarm. All the facts should be put on the table before a project of this magnitude is approved.”

Approval of the project at the state level by the State Corporation Commission, or the Virginia Supreme Court if aspects of the SCC decision are appealed, is not the final green light for construction of the $10 billion project.

The coalition has retained as counsel the law firm of Gatzke, Dillon and Ballance (GDB) of Carlsbad, California to represent them in evaluating the upcoming draft Environmental Impact Statement (EIS), which the Bureau of Ocean Energy Management (BOEM) is producing for Dominion’s Coastal Virginia Offshore Energy Project.

“Unless BOEM requires extensive, effective, unprecedented protection measures for the North Atlantic right whale immediately, this species is almost certainly headed toward extinction,” said David Stevenson, president of ACOP. “With only a little more than 300 individual right whales alive today, this endangered species is in dire need of protection, and the Virginia Wind Project lies directly in their annual migration path. The project will require extensive daily maintenance by multiple service ships, and the potential for whale fatalities due to ship strikes is indisputable.”

Initially, GDB will provide the coalition with advice and counsel to determine if BOEM has undertaken the legally required “hard look” at the OSW Project in order to provide necessary protection for Virginia’s environment and for the state’s electricity consumers, as required by the National Environmental Policy Act (NEPA). In addition, the firm will advise the coalition as to whether or not the EIS draft meets the requirements of the Endangered Species Act (ESA), the Clean Water Act, the Outer Continental Shelf Lands Act, and other relevant federal and state statutes that govern the construction and maintenance of the project.

“We are very pleased to have retained the services of a law firm with such extensive expertise in the requirements of federal laws such as NEPA and ESA,” said CFACT President Craig Rucker. “We are not only very concerned about the future of the right whale, which extensively uses the ocean waters affected by the wind-power project, but also concerned as to how BOEM will address the fact that this project, despite its alleged benefits regarding carbon dioxide and climate change, will actually cause the release of more carbon dioxide into the atmosphere than it will consume.”

BOEM anticipates that the draft EIS for the Virginia Wind Project will be released for public review and comment later this year. Dominion Energy is proposing to build 176 wind towers, which would stand more than 700 feet tall 27 miles off the coast of Virginia Beach. The company has announced that it expects to begin generating electricity from the project by the end of 2026.

“The Virginia Wind Project is a risky, costly, waste of resources and a pitiful way to generate electricity for a state which claims to be business and consumer friendly,” said Heartland Institute President James Taylor. “Before construction commences, the project should be given the same level of scrutiny for environmental protection by the courts and the federal authorities as has been provided for fossil fuel projects in Virginia, such as the Mountain Valley Pipeline.”

GDB has represented plaintiffs who have brought suits against BOEM, the Department of the Interior, the National Marine Fisheries Service, and other federal agencies with respect to the New York Bight offshore wind project off the coast of New York and New Jersey, as well as the Vineyard Wind project off the southern shore of Martha’s Vineyard, Massachusetts. These suits seek declaratory and injunctive relief and are currently pending in the Federal District Court for the District of Columbia and the Federal District Court in Massachusetts, respectively.

“We are equally troubled that Virginia ratepayers could be exposed to huge rate increases resulting from intermittent, unreliable wind generation,” added Rucker. “Should litigation become necessary to remedy deficiencies in BOEM’s final EIS, we are grateful to have experienced counsel for advice as we move forward.”

The coalition intends to comment on the draft EIS within 45 days of its issuance by BOEM, unless BOEM provides for a longer public review and comment period.