I will describe briefly how Louisiana has done its part in this.

The Mississippi River Commission (MRC) was established by an Act of Congress on June 28, 1879.

Congress charged the MRC with the mission to develop plans to improve the condition of the Mississippi River, foster navigation, promote commerce, and prevent destructive floods. 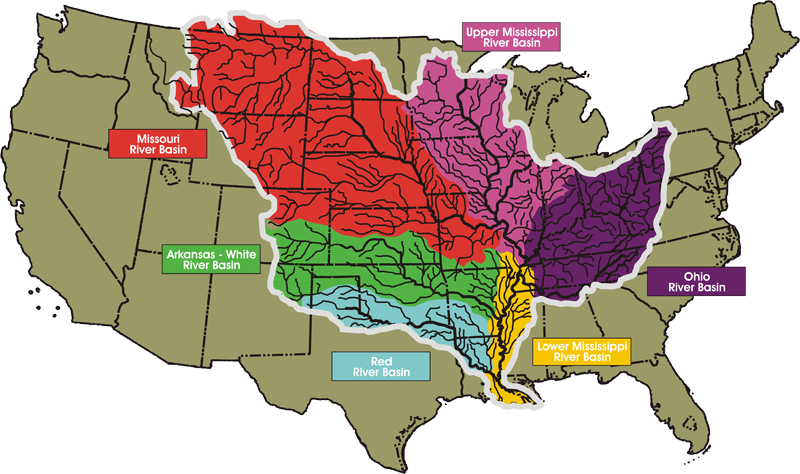 Today the MRC has largely realized its ambitious assignment through the prosecution of the comprehensive river management program known as the Mississippi River and Tributaries (MR&T) project — a project brought about by the greatest flood in recorded history of the lower Mississippi River.

The Great Flood of 1927 drove 700,000 people from their homes, inundated 26,000 square miles, and forced an overhaul of the flood control plan for the lower Mississippi River.

The MR&T project has been a huge success upriver from Louisiana, credited with $1.5 trillion in damage prevention.

But the MR&T project has been literally destructive of Louisiana and its delta region.

New Orleans sits below huge Lake Pontchartrain in the lower right quadrant of the image. 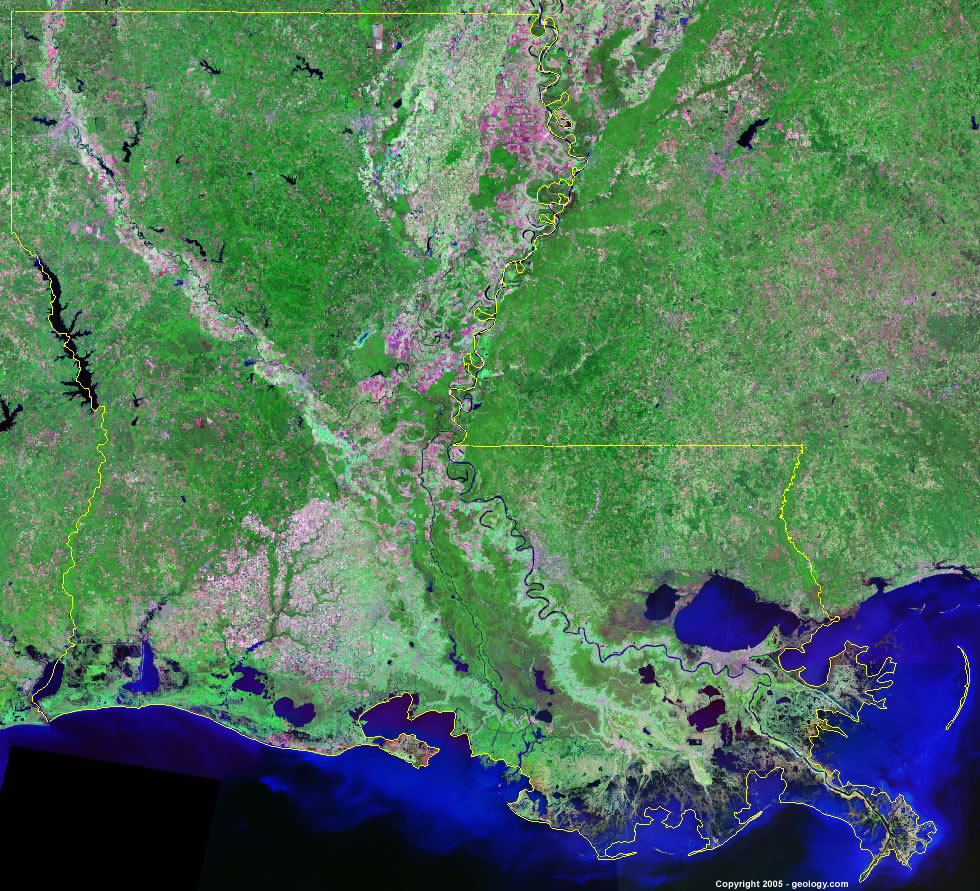 The MR&T levees blocked the annual silting of the delta.

Go to the original of the satellite image above and you can see the difference between the official boundaries of the state and the actual land now present. The state has lost 1,900 square miles since the delta stopped silting.

The river’s sediment instead is now dumped offshore. It no longer replenishing land that was being lost due to subsidence resulting from a decline in aquifers.

Together the Corps and CPRA, having finished the New Orleans area Hurricane and Storm Damage Risk Reduction System (HSDRRS), are acting to allow the delta to silt again in a controlled way through cuts in the levees in an attempt to regain the lost land and rebuild the barrier islands.

No castle building in this project.

CWPPRA is managed by a Task Force comprised of the State of Louisiana (CPRA) and five federal agencies: the Environmental Protection Agency, U.S. Fish and Wildlife Service, the Natural Resources Conservation Service, the National Marine Fisheries Service and the U.S. Army Corps of Engineers.

CWPPRA projects are funded on a cost-sharing basis: 85a5 federal, 15 % state. The high percentage of the cost borne by the federal government is testimony to the fact that it was federal levees that did the damage.

It is also a testimony of the power of Louisiana’s congressional delegation. This was widely called the Breaux Act.

Virginia’s delegation is currently not represented on any of the relevant Congressional committees.

Now for the very large castle in greater New Orleans.

One look at a topographical map of New Orleans and adjacent parishes shows what was there when the city was founded — a sharp turn in the Mississippi River that gave it its name the “Crescent City.” 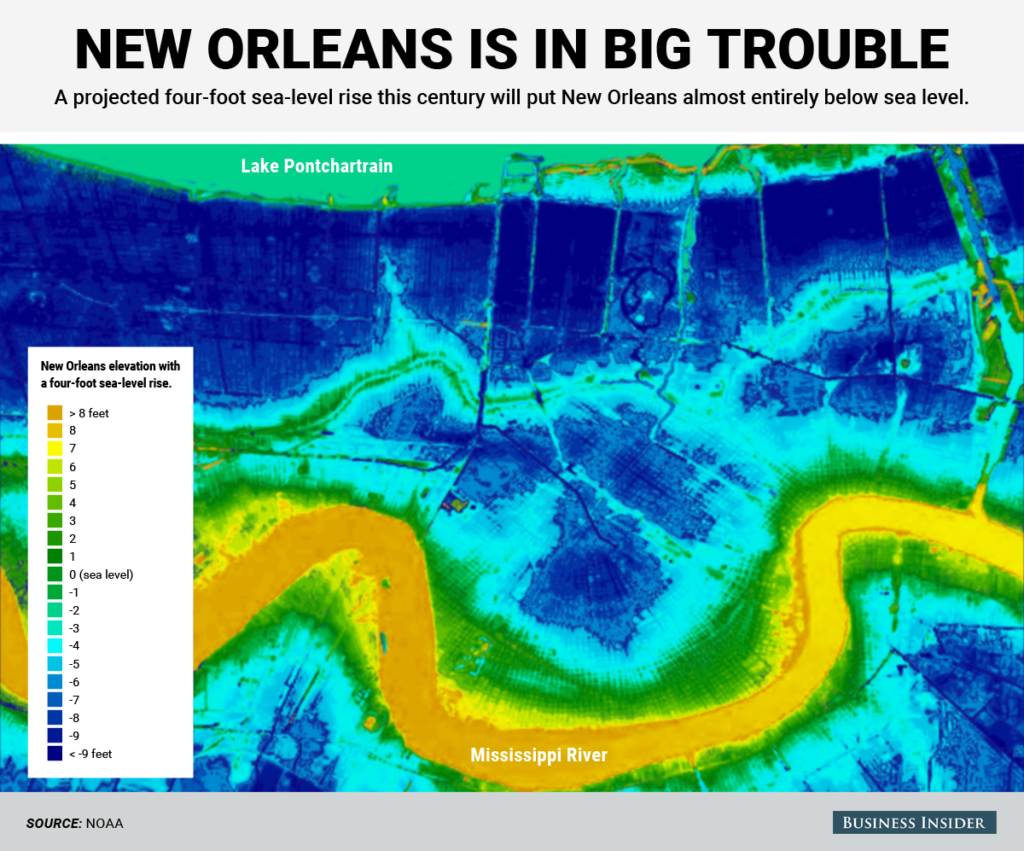 You will also notice that the Mississippi river, 11 ft above sea level at New Orleans because of the levees, is nearly the highest point in the metro area. Not a promising scenario.

Several centuries of levee building and pumping expanded the city to areas as much as 8 feet below sea level.

To quote from Dan Henninger in the Wall Street Journal about the success of federally led flood control efforts after Katrina that recently saved the city from Hurricane Ida:

“What saved human lives in Louisiana was real infrastructure — an extraordinary $14.5 billion concrete-and-steel project, funded by Congress, called the Hurricane and Storm Damage Risk Reduction System (HSDRRS). Built by the U.S. Army Corps of Engineers, with the advice of several private Dutch engineering firms, it is a … system of elevated levees, breakwalls, floodgates and pumping stations.”

“This was a government project — at the federal, state and local level — that worked. Yes, incredible to think, it can happen, and should more often but doesn’t seem to anymore.”

The HSDRRS is easily the most complex and successful civil engineering project of this century. It protects greater New Orleans including East Jefferson Parish, Orleans Parish and St. Bernard Parish. 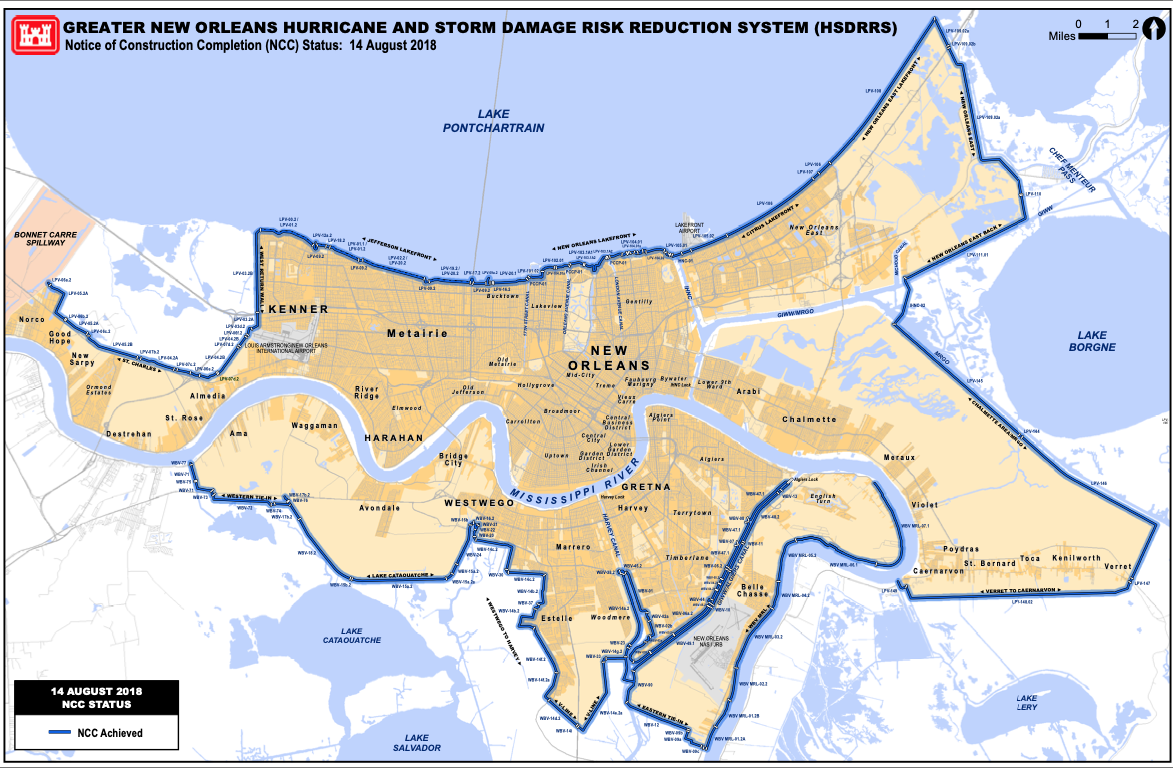 It is built of

Together they form a wall around those parishes. It was completed in 2018 after 12 years of work.

The HSDRRS also covers multiple restoration projects as mitigation for wetland impacts associated with the project construction. As I have mentioned before, federal law requires that green solutions be employed to the extent of their usefulness before “castles” like the HSDRRS are built.

What the Journal article does not mention is that large portions of what is now the HSDRRS were already well entrenched in the federal planning pipeline when Katrina hit, making its construction possible in such a relatively short period of time. That and CPRA.

Prior to 2005, coastal protection and restoration efforts in Louisiana were handled by a number of local and state governmental entities with limited budgets and little or no coordination of efforts. Each parish had a levee district and many built their own levees, often not to proper standards.

The levee districts were also responsible for maintaining federal levees in their districts. Some did it well. Some did not.

As a result of the devastation of Hurricanes Katrina and Rita and the failure of federal levees contributing to the devastation, the federal government agreed to focus attention and money on Louisiana.

As I wrote in my earlier piece, the feds wanted one central authority that would represent the state and be accountable for oversight of all activities and funds, and it wanted a coordinated plan of action with clear goals and achievable objectives.

The state of Louisiana went through several steps to get there. A series of laws over time established CPRA in 2005 and then sequentially strengthened it based on lessons learned.

By 2012 CPRA now has a Board and an operational arm (the Authority).

To do that, CPRA has the following Divisions:

Louisiana has accomplished all of this while recovering from a major disaster.

Virginia is headed off in a different direction.

We are horribly led.

This entry was posted in Disasters and disaster preparedness, Flooding, General Assembly, Governance and tagged James Sherlock. Bookmark the permalink.