What happens when the wind doesn’t blow? The North Sea, locale of the world’s largest cluster of wind farms, normally delivers strong, consistent wind flows that keeps the turbines spinning. But every once in a while, weather happens and the winds diminish. That’s what’s occurring now. Blame it on global warming, if you will — that seems to be the explanation for every inconvenient fluctuation in rainfall, temperature and extreme weather.

Whatever the cause, according to the Wall Street Journal, the falloff in wind is wreaking havoc in the United Kingdom, where wind supplies 25% of the nation’s electric power. Due to the wind “shortage,” marginal electricity prices have shot up to the equivalent of $395 per megawatt/hour (or $0.395 per kilowatt hour). That compares to the statewide average of $0.11 per kilowatt hour in Virginia. To make up the deficit, UK utilities have been burning more… coal. Coal will provide a backstop until 2024, when all coal-fired plants will be shuttered. Is anyone in Virginia paying attention?

Speaking of coal… Southwest Virginians are still casting around for ideas of what to do when the coal plants close. There is no lack of creative thinking. I just don’t know how practical it is. Here is the latest: growing artisanal grains. Once upon a time, Virginia’s coal counties grew grain to supply alcohol feedstock for a booming coal-town bars and saloons. The economics shifted in favor of massive Midwest farms, which enjoyed economies of scale, and local grain farming nearly ceased. But, according to The Virginia Mercury, local economic-development groups want to play on the local-food movement to make Southwest Virginia a primary source of specialty grains for Virginia’s growing craft beverage industry. Virginia imports 400,000 bushels of grain into the state. Snagging  a piece of that action could support a lot of farms.

With climate change, who knows how that will work out. Let’s hope the rain keeps falling. 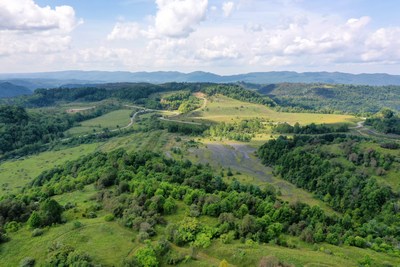 Replacing coal mines with solar panels. In another initiative, Dominion Energy Virginia is partnering with the Nature Conservancy to turn about 1,200 acres of the former Red Onion surface mine and surrounding properties into the 50-megawatt Highlands Solar project in Wise and Dickenson County. “This project is a huge win for Southwest Virginia’s economy,” said Ed Baine, President of Dominion Energy Virginia in a press release. “It’s also another major step toward building a 100 percent clean energy economy in Virginia. Repurposing former coal mines for solar is a smart way to enhance the region’s economy and bring renewables to Southwest Virginia.” Although the initiative is part of the larger Cumberland Forest Project designated for the restoration of 253,000 acres of native forest in Virginia, Tennessee and Kentucky, several thousand acres of non-forested former surface coal mines are deemed suitable for solar.

With climate change, you never know how that’s going to work out. Let’s hope the sun keeps shining.

This entry was posted in Energy and tagged James A. Bacon, Solar energy, Wind power. Bookmark the permalink.