Larry Sabato Is the One Living in a “Post-Factual” World 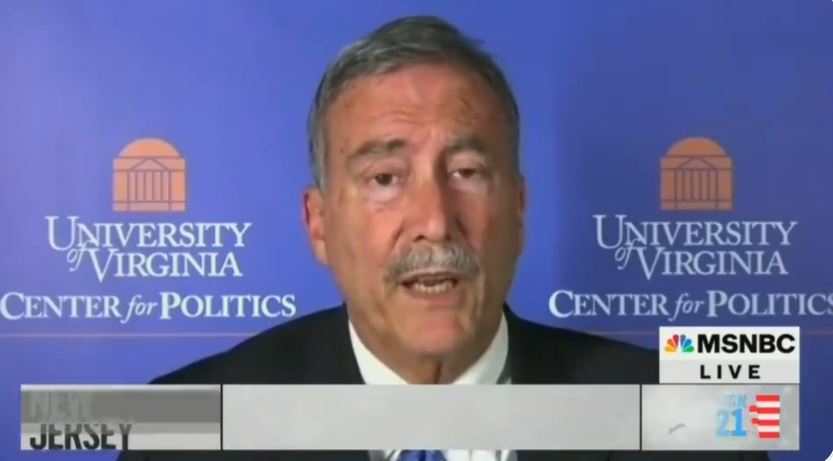 Larry Sabato has lost it. There was a time early in his career when the University of Virginia political science professor paid close attention to Virginia politics and spoke insightfully about it. But as he grew ever more successful as an author, director of the UVa Center for Politics, and a nationally quoted pundit, he increasingly became an observer of the national scene. As his focus became more national in scope, he lost touch with Virginia — at least the Virginia that lay outside the bubble of the Peoples’ Republic of Charlottesville — and he adopted the frame of reference common to the Washington Post, New York Times, cable news outlets, and Leftist punditocracy generally.

Sabato’s disconnect from Virginia political reality was abundantly clear in a series of interviews he gave MSNBC on election day.

When asked how Virginia could have swung from electing Joe Biden by a 10-point margin to giving an edge to Republican Glenn Youngkin, the Sage of Charlottesville noted Biden’s declining popularity and the Congressional Democrats’ circular firing squad. But, ultimately, he said, the gubernatorial election in Virginia was all about race.
Said Sabato:

One of the candidates decided [race] was his ticket to the governor’s mansion, and he may well be right. The operative word is not “critical.” And it’s not “theory.” It’s race. What a shock, huh? Race. That is what matters. And that’s why it sticks. There’s a lot of — you can call it White backlash. White resistance. Whatever you want to call it, it has to with race. We live in a post-factual era anyway. … It doesn’t matter that it isn’t taught in Virginia schools. It’s this generalized attitude that Whites are being put upon and we’ve got to do something about it — “we” being White voters.

Yes, the same Republicans who just elected a Black female immigrant as lieutenant governor and a Hispanic as Attorney General were engaged in a White backlash.

That would be the same Republicans who captured 13% of the Black vote, 31% of the Hispanic vote, and 34% of the Asian vote, according to Washington Post exit polls.

It may be true that we live in a “post-factual era,” but Sabato is the one who is not acquainted with the facts. He has totally absorbed Democratic Party talking points that depict the controversy over CRT as Republicans wanting to suppress the teaching of the “real” history of slavery and race in Virginia.

Every conservative I know personally, every conservative pundit I have read, and Glenn Youngkin himself, has made it crystal clear that an honest teaching of Virginia history means coming to terms with slavery, racism, and segregation. What we oppose is a curriculum that that imposes upon that history the doctrinaire conclusion that Virginia (and the nation) were conceived in sin, that racism is ubiquitous today, that Whites are oppressors and Blacks are victims. I don’t think most conservatives would even oppose teaching that as one possible interpretation of American history — as long as students were also exposed to the alternative view of American history as a long painful march toward the fulfillment of its founding ideals. The ultimate goal, of course, would be to teach students to think rigorously and independently.

Moreover, the issue is so much bigger than what is taught in the classroom today. At stake are the policies and guidelines that shape behavior and attitudes outside the academic curriculum, especially the idea, derived from critical race theory, that policy must be guided by “equity” — equal group outcomes — and corollaries of that idea, that school curricula, teacher training, disciplinary practices, and academic standards must be bent toward that single goal — regardless of how deleterious it may for overall student achievement and minority student achievement.

If the election was “all about race” for anyone, it was for Terry McAuliffe who, just before the election, spouted off the extraordinary notion that the large majority of White teachers was out of whack with the majority of non-White students in public schools, and that he was going to do something about it. McAuliffe made the election more explicitly about race than Youngkin ever did.

But, yeah, Republicans are the ones living in a post-factual world.

This entry was posted in Elections, Race and race relations and tagged James A. Bacon. Bookmark the permalink.