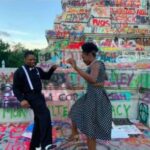 Anyone else remember Nancy Pelosi’s reaction on July 8, 2020 when a woke mob toppled the statue of Christopher Columbus in Baltimore?

“People will do what they do,” she shrugged.

The Hill reported that Pelosi went even further, suggesting that it was perfectly appropriate for a seething crowd of idiots to vandalize statues.

At her press conference, Pelosi, who is from Baltimore, said she was “not one of those people who is wedded to a, ‘Oh, a statue of somebody someplace is an important thing.’”

“I don’t – again, if the community doesn’t want the statue, the statue shouldn’t be there,” she added.

In other words, no biggie. It’s just a chunk of bronze or granite or whatever.

Shoot, 2020 was the year of statue toppling. It happened all across the country.

The Confederate monument in Portsmouth was vandalized — a man was gravely injured when part of it fell on him – with local politicians in attendance. The Portsmouth police chief lost her job for trying to stop the lawlessness.

I know, only in Portsmouth.

And in Richmond, news outlets like NPR saw the “art” in the graffiti scrawled all over the Robert E. Lee monument.

Black people all over the city are doing photoshoots at the new and improved confederate memorials. I think this one is attributed to Aisha Shabazz. A nice throw-back vibe. pic.twitter.com/QGNmM8WIgQ

Ah, but suddenly the left isn’t celebrating. Not after vandals turned their spray paint cans on the George Floyd statue in Brooklyn.

That monument was defaced last week and NYPD is investigating it as a hate crime.

Mayor Bill DeBlasio — who didn’t have much to say when criminals attacked the Christopher Columbus statue in Central Park — is outraged about this.

The City Cleanup Corps is repairing the statue right now and a hate crime investigation is underway. We will bring these cowards to justice. pic.twitter.com/mTwzwIyG4z

As usual, the left drips in hypocrisy.

Look, some of us happen to believe that destruction of public property is ALWAYS wrong. We didn’t find the spray-painting of Confederate, Lincoln, Jefferson or Columbus statues amusing in the least.

But once the woke crowd cheered the vandalism of statues of historical figures they didn’t like, they opened the door for other folks to believe that vandalism is an acceptable form of protest.

Sorry about the George Floyd statue, but anyone who didn’t see this coming was being willfully blind.

This entry was posted in Culture wars. Bookmark the permalink.