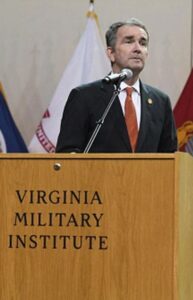 In his recent speech to the Virginia Military Institute, Governor Ralph Northam had a lot to say about traditions and practices at the military academy when he attended in the 1970s. He recalled numerous details that supported his narrative about the “appalling” racism that justified his launch of an investigation that wound up confirming his allegation. Thank goodness for the fact- checkers at The Cadet, the Virginia Military Institute’s unsanctioned, independent student newspaper. It turns out that some of what Northam remembers just ain’t so.

The following has been excerpted from the most recent edition of The Cadet. — JAB

Gov. Northam from the Speech: “Shining my shoes and my brass. Straining. Rolling my hay up every day, and my dyke’s. Memorizing the Rat Bible. Pumping out push ups while 3rd classmen looked on with pleasure. Most of all—doing everything I could to avoid being singled out.”

Gov. Northam Statement: “That day was incredibly special for me, as the first VMI graduate to serve as Governor in more than 100 years.”

Fact Check: TRUE
Gov. Northam Statement: “In my time at VMI, I served as my company’s first corporal, first sergeant, first battalion commander, and president of the Honor Court. I wore academic stars, and like you, I was the beneficiary of a world-class education.”

Gov. Northam Statement: “Back then, I didn’t ask a lot of questions about day-to-day life around VMI. … Salute that statue? … I didn’t ask why. I just did what I was told — trying to avoid ten more pushups. … It didn’t occur to me to ask, who is that a statue of? When was it erected? Why is that person being honored? Who decided that we would all salute him”

Without providing any substantiating facts, the Barnes and Thornburg Investigation Final Report stated, “…after a graduate donated a statue of LTG Thomas “Stonewall” Jackson to VMI in 1912, at some point a practice arose of requiring fourth class cadets to salute the statue. According to various alumni, while this tradition was in force African American Cadets who refused to salute the statue were given penalty tours. VMI ended this tradition in 2015, and in December 2020 VMI removed Jackson’s statue from in front of the barracks, with the intent of moving it to the Virginia Museum of the Civil War.” This account is inaccurate and Governor Northam’s statement of his being required to salute Jackson’s statue is false. According to official VMI records, the “alumnus” who donated the Stonewall Jackson to in 1912 was, in fact, the world famous sculptor, Sir Moses Ezekiel, Class of 1866, VMI’s first Jewish Cadet and a veteran of the Battle of New Market. Though he attended VMI, fought for the South, and survived the Battle of New Market [he] opposed slavery—“In reality no one in the South would have raised an arm to fight for slavery. It was an evil that we had inherited and that we wanted to get rid of,” he said. Neither the Barnes and Thornburg report, nor any other source has yet to produce any documentation that any Cadet, of any race, were given penalty tours for refusing to salute Jackson’s statue. This despite the fact that the records for alumni interviewed for the Washington Post Articles are available in the VMI Archives with other historic documents that could have been reviewed.

Governor Northam’s statement he was required to salute Jackson’s statue and did not know who statuary on VMI was also FALSE. A check of the Class of ’78 Rat Bible applicable to Governor Northam’s Class of ’81 and the Rat Bible published for their Rats by Governor Northam’s VMI Class of ’81 shows both published a detailed summary of the history of VMI, descriptions of major buildings and sections covering all the statues on Post (Jackson, Smith, Washington, New Market, The Spirit of Youth) that answered those questions in Governor Northam’s remarks. These documents confirm the ONLY statue Rats were officially required to salute or face possible punishment by the Rat Disciplinary Committee to Salute was General George Washington outside Washington Arch. While there may in some years have been a tradition imposed by some Cadets on others to salute Jackson’s statue, it was never an official policy or Ratline requirement for Governor Northam, according to the Rat Bible. It is possible, however, that if Governor Northam did not truly know who any of the Generals were, as he stated, that he could have confused saluting George Washington with Saluting Stonewall Jackson although this seems unlikely.

The song Dixie was never played at official VMI ceremonies or events during Governor Northam’s entire time as a Cadet, and the Confederate flag, only displayed (not flown) for the annual New Market ceremonies, was removed from those ceremonies – and from VMI Class Rings – several years after Governor Northam graduated. These actions were taken by the VMI Corps of Cadets and not imposed by the administration or the Commonwealth.

According to “The Confederate Battle Flag,” by John M. Coski, “Although steeped in Confederate history, VMI began de-emphasizing Confederate symbolism when it first admitted black Cadets in 1968.”

The playing of “Dixie” and the display of the Confederate flag were actually retired, by a vote of the entire corps, when Black Cadets raised objections in 1973, eight years before Governor Northam’s Rat year). The Confederate flag and Dixie, at the time their use ceased, were only used once a year during the annual New Market Ceremonies.

According to “The SAGE Encyclopedia of War: Social Science Perspectives,” edited by Paul Joseph, “After racial integration in the 1960s, the school [VMI] shed some of its laudatory treatment of the Confederacy. In 1992, the Confederate battle flag was removed from VMI class rings, and the school band no longer plays “Dixie” at special events. Students can avoid the New Market Parade by volunteering for other duties on that day.”

Bacon’s bottom line: Too bad The Cadet wasn’t around three years ago to fact-check Northam’s cockamamie claim that he wasn’t the guy in blackface in that medical school yearbook photo!

Anyone who wants to support independent student journalism can donate to The Cadet at https://givebutter.com/Gw0jQW.