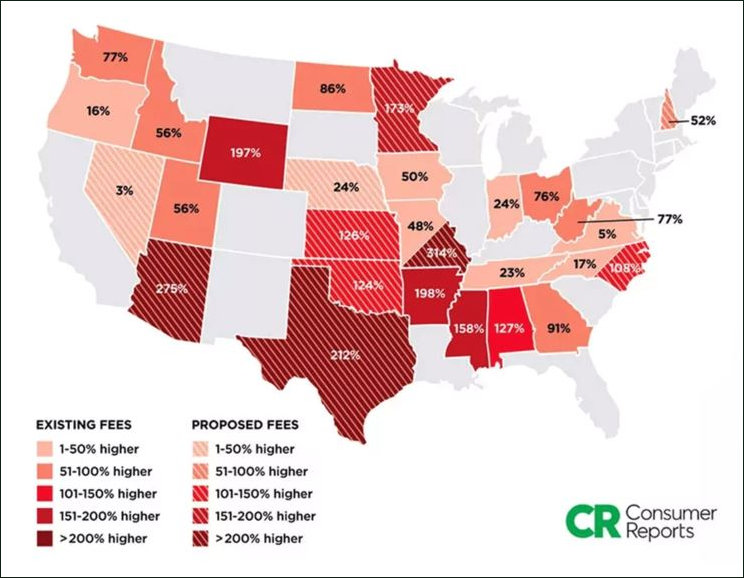 In an October 15th post, James Bacon asked the question: How should we tax electric vehicles?

Bacon’s bottom line is reasonable, and it is worth noting that electric vehicles (EVs) and clean fuels already pay more than their fair share in Virginia with equivalent or excessive taxes, according to Consumer Reports. It is easy to agree with Bacon’s ideas of user fees and externalities, where EVs also pay, and where pollution externalities are integrated into state fee structures.

However, Virginia has not ignored the transportation revenue potential of EVs and reaps a high tax on these vehicles. Since the McDonnell administration, electric vehicles been assessed a punishing $64 a year fee in order to gather an approximate amount of revenue equivalent to somewhat more than traditional vehicles pay in gas tax. This fee has been used by the oil industry to justify high fees nationwide.

A recent Consumer Reports study in September showed that now in many states, electric-car fees often cost far more than what owners of gasoline-powered cars pay in gas tax. Virginia’s fee is 5% higher, even though EVs and clean fuel vehicles have great benefit to the Commonwealth through emissions reduction.

I suggest we should tax electric vehicles no greater than gasoline and diesel vehicles. Other financing mechanisms are great, but punishing cleaner vehicles fueled by domestic energy creates an unbalanced playing field favoring high cost oil.

Bacon suggests calculating and adjusting downward for cleaner air for both pollution and direct CO2 emissions from gasoline combustion and indirect emissions via the electric grid, any such calculations would have to be revisited periodically to reflect the greening of the grid. By this measure, the carbon fee today should be 60% higher on gasoline than on grid electricity, though further discounts could be tied to time of use charging, bringing electricity to zero emissions or negative emissions with GHG sequestration sources.

According to the U.S. Department of Energy, electric vehicles produce very low emissions in Virginia if you compare grid fuel to gasoline emissions. 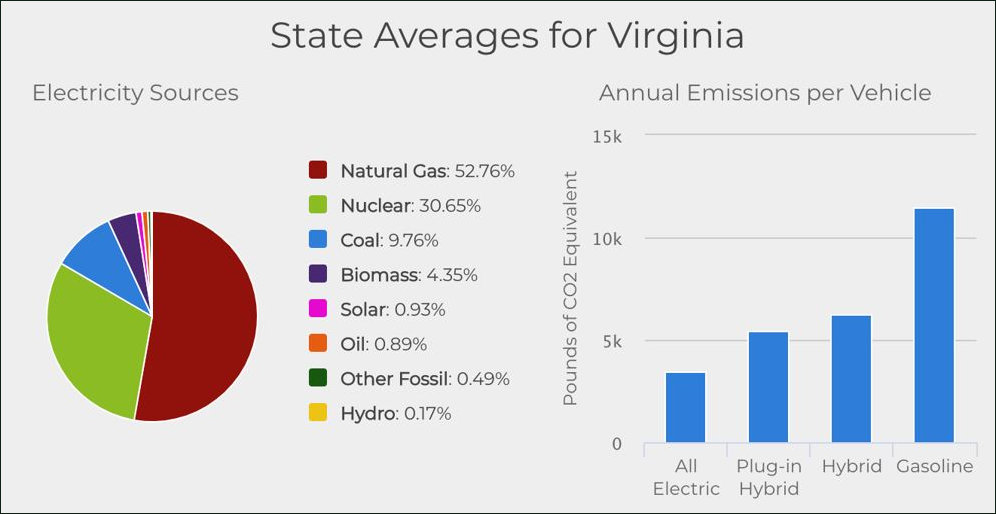 Electric vehicles are cleaner for the air, with significant health benefits beyond the CO2 reductions. They generate no tailpipe pollution when operating, and pollution from electricity generation can be mitigated with improvements to the grid, timing of charging, and lower cost renewables like Dominion Energy’s announced 2.6-gigawatt wind project which can charge these vehicles at night. Virginia for the most part is not coal intensive, with peak coal back in 1990’s. We are now using coal for less than 10% of our electric energy mix. Renewables like solar and wind are also now lower in cost than coal.

Virginia produces nearly no oil in the state, but we spend around $33 million a day on 13 million gallons of imported gasoline and diesel, an enormous shifting of wealth from Virginians to oil-producers out of the state and in other countries. We produce many things that can produce electricity. This importation of highly polluting oil energy is an enormous drain on Virginia’s economy.

The United States just sent 1,000 troops, likely including Virginians, to Saudi Arabia to help defend Saudi oil. We maintain a fleet in the Strait of Hormuz to facilitate oil shipments. This international military investment is an externality that could be tracked and budgeted into the federal or state motorfuels tax of billions of our dollars.

Electric vehicles are affordable for all people today. Beyond Teslas, most EVs cost well under the $39,000 average price for a new car – with LEAF and Bolt available in VA under $30,000, and the Tesla 3 landing at $39,000 – the average price for a new car. Virginia-headquartered Volkswagen and Audi are planning a future with heavy electric vehicle investments. Ford and Shell just announced major partnership in advance of Ford’s new electric vehicles. Good used EVs are available for around $12,000. You can find new Nissan LEAFs posted for $18,900 and Prius Primes for $22,000 in Virginia on www.electrifyyourrideva.org .

Because electricity is low cost (about $1 per gallon equivalent) and vehicles can travel many miles on each $0.12 kilowatt of Virginia-made clean energy, driving electric pencils out to save $10k over 10 years in fuel costs. Fueleconomy.gov lets you see how much it would take to get each EV to 25 miles. Between fuel and initial cost in Virginia, a great EV total cost of ownership over 10 years is half that of the average new vehicle in the U.S.

Bacon is right to raise the discussion on user fees (miles) and externalities (pollution). The comments raised about a Vehicle Miles Traveled fees are sound and worth reviewing. Other states like Washington are phasing in a VMT over 10 years. EVs, which produce zero tailpipe emissions and use cleaner local energy, currently do pay greater than their fare share today in support of Virginia’s roads.

This entry was posted in Energy, Environment, Transportation and tagged Guest contributors. Bookmark the permalink.